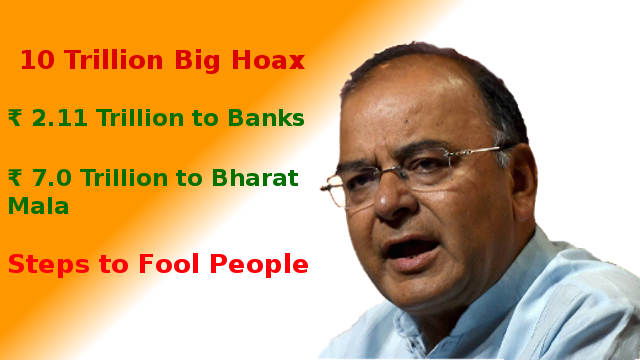 Narendra Modi government announced a ₹10 trillion investment to revive the economy, out of which ₹7 trillion will be spent in building infrastructure, especially 83,677 km of roads and highways and ₹2.11 trillion to recapitalise the PSU banks. The road building will be done under a fanciful name of Bharat Mala and the PSU recapitalisation will happen as per the government’s older plans that centred around reviving the lending capacity of the PSU banks, which are reeling under heavy burden of Non Performing Assets (NPA) since a long time due to large parts of their debts, mostly corporate debts, going down the gutter as bad debts. While the Modi government has done nothing to press the big corporate houses to repay the money they have usurped from the PSU banks over years and thereby caused decay in the balance sheets of these banks, forcing the banks to look at the government for more capital to prevent bankruptcy, it has indeed helped the corporate crony entities to evade taxes and loan repayment obligations by holding the banks from actively chasing these big sharks. But this government has, in the most shameless manner, taken out money from the public exchequer to fund the banks as capital, a major chunk of which will go to the big foreign and Indian corporate houses, while the residue will be used by the banks as salary, perks and bonuses for the top executives and managers, while the common employees will be left with big promises, long hours of work, fewer labour rights and a chance to lose their job if Arun Jaitley gets his much taunted “bank reform” agenda through and privatises the PSU banks en masse.

In 2015, Arun Jaitley promised ₹70,000 crore for bank recapitalisation spread over years. The present decision of recapitalising the PSU banks with ₹2.11 trillion is also closely linked with that decision, as nearly ₹76,000 crore of that amount will come from “budgetary support” – which will force the fiscal deficit to rise beyond the 3.2 percent target that the government planned to cap it at, at least during the budget declaration. On the other hand, the rest of the amount will be arranged through a nasty trick, i.e. through bonds that will carry surety of the central government, though there will be really no money to back up that surety. This will eventually not solve the problem of the banks, but surely ensure that the people’s money, paid through direct and indirect taxes, will go towards filling the hole that’s dug by the big corporate houses, who enjoy special privilege in the court of Narendra Modi and vice versa. However, this ₹2.11 trillion will ensure that the corporate houses and the stock market remain in a jubilant mood for the next few quarters, calming down the discontent that aroused within them against the Modi government. There is no promise though that the banks will be able to meet the issue of NPAs, even when the government is trying to build cosmetic measures through toothless acts on controlling the NPA of PSU banks.

Arun Jaitley’s power point presentation during the press meet reiterated the points that he and the prime minister have been saying all these days – the Indian economy is growing, demonetisation was a good decision, GST is welcomed by traders, the world is looking at India as the most promising economy, employment is not falling but rising, so and so forth – hallelujah hallelujah. But when he allocated ₹7 trillion to boost infrastructure by building roads and highways, then the cat came out of the bag. The plan to build roads by the government is already on since Narendra Modi gave the department to Nitin Gadkari. However, the government, as per its own records, is falling far behind in building new roads and it could only build 5200 km out of 15,000 km of total targeted road in the last year. If we calculate the total promised road and highway that Arun Jaitley claimed the government will build then we will see they have only added 500 km to their previously promised figure.

The entire infrastructure building activity has actually two core motives, one, military, which aims at building roads and highways to connect to the China border, in view of the US plan to build up military infrastructure in South Asia to encircle China; also roads are built in the hinterlands of Chhattisgarh, Odisha and Jharkhand, where the Modi government is waging a barbaric war against the tribal people to evict them from their land and forests and hand them over to the big mining corporations. Chhattisgarh is leading in the road building project, earlier called National Highway Development Programme, which is now rechristened as Bharat Mala. The stakes of the mining corporations in the state’s mineral reserves are high and so the government is determined to send its military and paramilitary forces to the remotest part of the state through the newly built roads. The second one is the economic agenda of the Modi government; its attempt to help the big corporations to reach the ports, SEZs, mines, etc. operated by the Adani group and other corporate houses that donate generously to Modi’s electoral fund. The aim is not to promote any employment-generating industry to open shops, but to help the crony comprador capitalists and big foreign monopoly and finance capital-owned corporations to maximise their profits through the use of money collected from the people.

Employment generation in road and highway building is massive, but it’s neither a source of a permanent employment with adequate social-securities to the unemployed poor nor does the nature of the job renders the workers physically capable to work for a longer period in their lives due to the extremely hazardous working condition. Moreover, as the work shifts from one area to another, therefore, the workers do not remain employed in a project for a long period. The employment generation in the raw material industry, the boost to the heavy machinery, iron and steel, coal, etc. industries will not impact a lot of employment at present as most companies will try to meet new order targets by overexploiting the present labour force, thanks to the relaxed labour rights. Therefore, at the end of the day, the story of generating a huge amount of employment will turn out to be another jumla, another farce that is cheered by the toady mainstream media of Modi and the Hindutva cheerleaders.

Arun Jaitley made a hoax out of ₹10 trillion to fool the people and deceive the press because there is no way out for the Modi government from the mire in which it has taken the Indian economy. The crisis-ridden Indian economy is suffering due to the constant burdens imposed by the US-led foreign monopoly and finance capital on the neo-colony ruled by its trusted lackey Narendra Modi. As the government’s neo-liberal economic reign has unleashed an economic terror on the country, especially its unashamed efforts to please the foreign monopoly and finance capital through the moves like demonetisation and GST implementation, there is no way it can reverse the chain and provide any real relief to the poor people. The road building and bank recapitalisation efforts using the ₹10 trillion from public exchequer will eventually not help the common people; neither it will generate any significant employment, except for few cases, nor will it bring any momentum for a long term in the country’s major industries, as the consumer demand will remain at low due to reduced purchasing power. Indian economy is now going through the hoax period, as the government and the central bank keeps duping the people with rosy promises, while in reality, it’s sinking every day deeper into the quagmire.