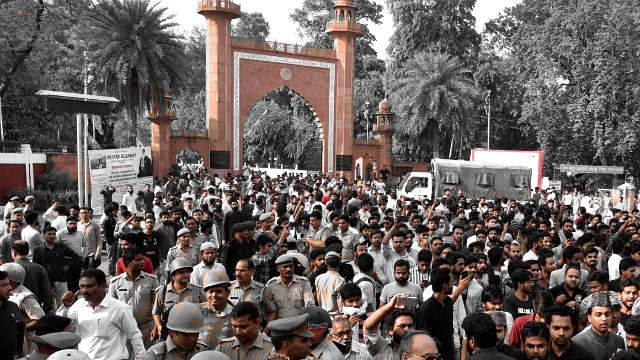 The purpose of this article is not to state and revise the issues of JNU or AMU once again, but to understand how the ruling BJP is trying to build a narrative for themselves by curbing the independent voices of the youth. The intent of the Modi government was much visible ever since a target was made on Jawaharlal Nehru University students; however, there is nothing which could stop it ever since from attacking institutions of higher education and students who are reluctant to be its lackey.

Once again, some of the most reputed universities in India are making news, and of course, again not for the right reasons. The storm of Aligarh Muslim University has not even subsided that Jamia Millia Islamia is in news. Both for more or less, the similar reasons.

The students of Aligarh Muslim University were attacked by a Hindutva fascist group over an eight-decade-old portrait of Mohammed Ali Jinnah, the founder of Pakistan and a Muslim League leader who played a divisive role, akin to the RSS, during the colonial rule. The controversy was sparked after Satish Gautam, Lok Sabha MP from Aligarh, who is also a member of the AMU court, visited the campus and created an unwarranted ruckus over the portrait of Jinnah in AMU’s Student Union Hall.

The issue was further intensified, when the Hindu Yuva Vahini, a Gestapo force reared as a private militia by the sycophants of the Uttar Pradesh Chief Minister Yogi Adityanath alias Ajay Bisht, attacked the campus and collided with the AMU students when the former Vice President of India, Hamid Ansari was visiting the university for a programme. It has already been several days and nothing seems to settle down. The students and locals from Aligarh have even appealed to the President of the country, who is the Chancellor of AMU, to resolve this issue. The student movement has intensified and the campus of AMU is now virtually under the control of the agitating students, who would settle for nothing that demeans the prestige of their university.

The paradox in this situation is that the man who stirred the controversy – BJP MP Satish Gautam, had been a member of the AMU Court between 2014 and 2017. Why didn’t he raise the issue earlier, and how come his letter flagging the issue was leaked to the media even before it reached the Vice Chancellor’s office? These are questions asked by those in the AMU community. And this makes perfect sense if one comes to figuring out the issue from ground zero.

If one goes on to see the fiasco from a critical and intelligent frame of mind, it portrays the incident as an attack not just on AMU but on all institutions of higher learning in the country and their pluralist ethos. They point to a pattern, uniform in these attacks, and urge one to look at “the larger picture”.

The attack on the higher institutions of education, funded by the public money is targeted by the RSS and its offshoot agencies because the present government wants to use the university vilification as a subterfuge to effectively distract the public attention from the fact that through the “autonomy” route, the Union Human Resource Development Ministry headed by Prakash Javadekar is widening the scope of corporate takeover of higher education and turn universities into exclusive zones for the wards of upper-caste elites and urban middle-class people only.

AMU has been a soft target always for the Hindutva thugs. Earlier too, many Hindutva goons led by the same MP, Satish Gautam, tried to disrupt AMU’s peaceful atmosphere when they gratuitously introduced a controversy over the celebration of Mahendra Pratap Singh’s birth anniversary within the campus in 2014.

Immediately after the recent attack on AMU by the Hindu Yuva Vahini, which consists of men who have nothing to do with education, a group of Hindutva even attacked Jamia Millia Islamia in South Delhi, making claims that Hindus are not safe in the university campus. Why such ridiculous claims? Because it is a university with a minority status. An identity that makes it a thorn in the eyes of the majoritarian mobsters.

If we go back in history, it is relevant to understand and know that both AMU and Jamia Millia Islamia (JMI) were among the rarest institutions in the world whose students have played a major role in the country’s anti-colonial struggle. M.K. Gandhi went to Aligarh in 1920 to invite the students of AMU (then MAO College) in the Non-cooperation movement launched by him. The students didn’t disappoint Gandhi and played a vital role in the movement, which Gandhi later pulled off.

Any of the minority-status universities never have to prove their loyalty to India, they have done enough through their work of producing excellent quality human resource. The universities have produced gems who have contributed a lot in the making of modern India. Why would the Muslim prove his or her loyalty to the country every now and then to appease the chauvinist desire of the Hindutva fascists? If the Hindutva camp didn’t understand the concept, then they better stay off the campuses of the country, because they aren’t their Gaushalas, rather the seeding ground of new ideas and innovations, things that are alien to a Sanghi life.

Education is considered a tool to inculcate the independent thinking among students. The youth are the free-thinkers of tomorrow, and we need a strong public-funded education system, especially for the oppressed Dalits, tribals, Muslims and other minority communities, for the unadulterated growth of our new India. The basis of the education is the conveying real facts and established principles to the students through their curriculum, equipping them to analyse these facts and evolve their independent thinking. This will lead to a rational society; however, education is used as a means for ideological indoctrination by the RSS and BJP, for polarising the entire society on religious lines to implement their strategy of establishing a Hindutva fascist monarchy in India by 2022.

The present government is not only using educational institutions to communalise education through the presentation of wrong facts, fabricated history, and wrong interpretations, but the Modi regime is also using these institutions of higher education extensively as a tool for opinion building and defending their economic policies. This is a very precarious trend where the Hindutva fascist Modi government is using educational institutions to justify the gimmicks and anti-people policies. By exploiting the religious sentiments of the backward masses, they are trying to justify government’s unjustified actions.

Saffronisation of education and educational institutions is not only wrong but dangerous. It is important to note that education is being targeted by the Modi government and the RSS right from the first day due to some heinous motive. Building a narrative and governing a nation where independent voices will no longer be heard, is that very India, that the Modi regime wants to rule. Well, in that case, go ahead with your strategy but stop calling our nation as the biggest democracy in the world because unfortunately, we no longer are one.