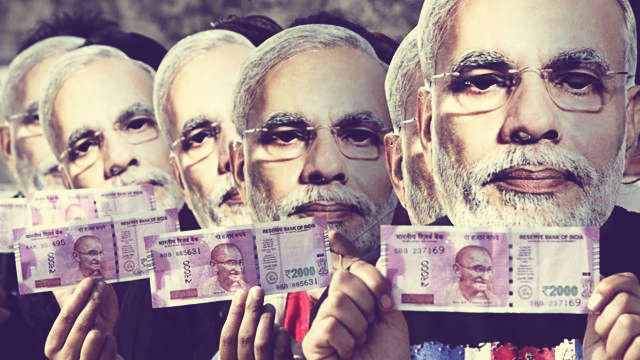 After a brief lull, the Modi regime is going to face large-scale mass discontent and parliamentary opposition in the coming days as Indian GDP growth rate is going to fall to 6.5 per cent for the Financial Year (FY) 2017-18, as per the recent data released by the Ministry of Statistics and Programme Implementation.

Though Narendra Modi’s advocate-cum-economist commander Arun Jaitley will come up with rosy pictures of the economy by the time this article will be published, it’s visible to anyone with slight knowledge of economics that the key sectors of the Indian economy, especially the agriculture and manufacturing sector, are sinking in the mire at present. This crisis is caused by the policies like demonetisation drive and the roll-out of the draconian GST regime by the Modi regime.

Manufacturing and agriculture employ the largest number of people, especially the unorganised urban and rural labour, throughout the country. The cash crunch caused by the demonetisation exercise in 2016 erected severe problems for these sectors and many small and medium-sized enterprises were forced to close their shops during the demonetisation drive, while those survived had to face the complex taxation regime under the GST and wither away.

The growth of Gross Value Added (GVA) in the manufacturing sector is expected to drop to 4.6 per cent in this fiscal, down from 7.1 per cent in the FY 2016-17, the aforementioned report released by the MSPI said.

The report also cites that the agriculture, fishing and forestry sector’s expansion will fall to 2.1 per cent in the current fiscal from 4.9 per cent in the previous one.

The report said: “According to the information furnished by the Department of Agriculture and Cooperation (DAC), the production of food grains during the Kharif season of agriculture year 2017-18 was 134.67 million tonnes as compared to 138.52 million tonnes during the same period in 2016-17.” (sic)

Drought, floods, anti-farmer policies of the Modi government, the demonic nature of the neo-liberal economy, which engulfs the agriculture sector and throws it into severe crisis, have wreaked havoc on the already struggling sector, which on one hand provides the largest employment opportunity to more than 70 per cent of Indian people, and on the other hand, suffocates due to systematic negligence since decades.

As the unorganised sector and the marginal players in the manufacturing industry are at the verge of withering away like an extinct species, the Modi government is leaving no stones unturned to help the comprador and bureaucratic capital-owned corporations and banks to monopolise their rule on India.

Despite cutting heavily the public expenditure on welfare schemes, education and development of the poor people, Arun Jaitley was found, searching for avenues to bailout big corporate houses and banks out of crisis throughout his tenure as the country’s most notorious finance minister.

His visionary leadership as an “RSS-economist” is epitomised perfectly today, when the Indian economy is falling in the gulley of an irrevocable catastrophe and Jaitley is spending ₹2.11 trillion to bail-out the PSU banks reeling under the burden of Non-Performing Assets, skyrocketing every financial year, caused by the deliberate loan defaults of the corporate entities owned by big foreign monopoly and finance capital-owned corporations and their Indian comprador capitalist lackeys.

Not only this hefty amount is taken out from the public exchequer, filled with the hard-earned money of the common people, under the pretext of recapitalising the PSU banks struggling to cope up with the growing NPAs, the Modi government is all set to bring a draconian finance bill, Financial Resolution and Deposit Insurance Bill (FRDI), 2017, which will replace the Deposit Insurance and Credit Guarantee Corporation Act of 1961.

The FRDI bill will create a super-authority, Resolution Corporation, which will supersede the authority of the Reserve Bank of India and will enable the banks, which are reeling under the financial distress caused by bad corporate loans, to recover their loss by converting a section or the entire savings deposit of their customers into securities, like shares of the bank and carry out a bail-in exercise, which will spare the government from spending money to bail-out the banks in distress.

As the Jan Dhan Yojana and the demonetisation exercise forced a large section of the Indian people, especially the poor people, to open bank accounts and keep their money deposited in the banks, especially in the PSU banks that are considered secure by the majority of the people due to the share of the government in these banks, now these hapless people are vulnerable to this new financial shock that the Modi government wants to give them through the FRDI, 2017.

Nearly ₹76,000 out of the ₹2.11 trillion bail-out money is allocated from “budgetary support”, which will thwart the plan of the Modi regime to control fiscal deficit at 3.2 per cent in the present fiscal. The Modi regime also borrowed ₹5.8 trillion to bridge the fiscal deficit of 3.2 per cent. The compulsion of the Modi government to reduce GST during the Gujarat assembly election dipped the tax collection to ₹80,808 crores in November 2017.

The Modi regime will shamelessly borrow around ₹50,000 crore in this fiscal year through government securities, while the Treasury Bills, popularly called T-Bills, will be run down by ₹61,203 crore. The rising inflation during this period is also rendering the central bank, Reserve Bank of India, toothless to fight the crisis, as the interest rates cannot be changed to discipline the economy at this point of time.

As the morning shows a glimpse of the rest of the day, the gloomy economic situation, the crisis-ridden core sectors of the economy, rising unemployment and growing inflation is fuelling mass discontent throughout India and the sugar-coated bullets fired by the lackeys of Narendra Modi to hoodwink the people into believing that these anti-people policies will help the people live a better life, shows that this regime is now going to enter a phase where large-scale mass struggles will erupt against its fascist rule.

Crisis-ridden world capitalist system cannot rescue the Indian government through its aid and financial packages, as they could during the 1960s and early 1970s. The reform process, the opening up of the Indian economy to the neo-liberal order, the prostration of successive governments, especially the Modi government, before the foreign capital and investment, considered key for infrastructure and economic development by the right-wing fascist press, have failed to deter the doom of the Indian economy in its current state.

The unbridled borrowings by the Modi government, the bail-in project in the pipeline, the falling GDP growth rate and the slowdown in the growth of the per capita income are signalling that very soon India and its people will be mortgaged by the Modi regime to the big foreign banks and corporations, to the notorious bodies like the World Bank, IMF and the WTO, to bail out the Indian economy from the quagmire it’s forced into.

To secure their financial interests, the big comprador capitalists, bureaucratic capitalists, the feudal landlords and usurers will rally their support behind the Modi government under the patronage of their master, the US-owned big foreign corporations and banks.

These evil forces will collectively protect the Modi regime from onslaughts of the people and the democratic forces, and they will spend billions from their ill-gotten money, plundered by exploiting the labour of the working class and peasantry, to thwart any attempts by the popular forces, the opponents of the Modi government to defeat the regime.

However, despite such conspiracies and the erection of barriers by these corporate houses, feudal landlords and the foreign capital, the common people, the working class and the peasantry, the toiled people and the exploited masses must have to build up a strong struggle against the neo-colonial and semi-feudal rule, of which the Modi regime is the protector.

The struggle of the broad masses is vital for their own cause and to protect their own money, resources and sovereignty, which the corporate world is attempting to loot. Such a struggle can be the real transformer for India and its poor, who can liberate themselves from abject poverty, hunger, sickness and enslavement by only bringing down the despotic Hindutva fascist regime and by establishing a pro-socialist economic model.