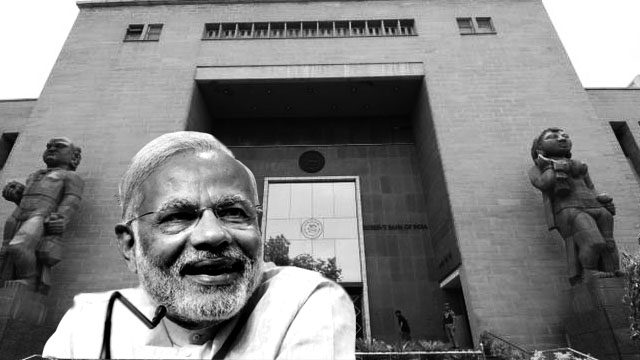 Narendra Modi-led National Democratic Alliance (NDA) government has received a record surplus transfer of Rs 1.76 trillion from the Reserve Bank of India (RBI) for the financial year (FY) 2018-19 or July 2018 to June 2019. Out of this Rs 1.76 trillion, Rs 1.23 trillion is surplus, known as “dividend”, that the RBI pays to the NDA government. This amount is 2.5 times more than Rs 500 billion that the RBI paid to the NDA government in the last FY. The rest Rs 526.37 billion is part of the excess provisions as recommended by the Committee on Economic Capital Framework (ECF) headed by former RBI governor Bimal Jalan.

The RBI — the central bank of India — holds two types of reserves. One is its revaluation account, where the money earned by the RBI from bullion reserves and currency exchange margins is stored. The other is the contingency fund that’s used to make emergency adjustments during the rainy days of the economy. The Modi regime has been eyeing the RBI’s surplus since a long time, which earlier led to a bitter in-fighting within the institution when the government tried to end the autonomy of the RBI.

This contradiction reached its peak in December 2018 when the former RBI governor Urjit Patel quit the institution after opposing the government’s ill-effort to grab a lion’s share of the RBI’s contingency and revaluation funds. Patel was hand-picked by Modi earlier to head the institution and he helped the government traverse the treacherous course of the demonetisation disaster. Due to Patel’s reluctance to share a larger pie of RBI funds, he had to quit and Shaktikanta Das, a former bureaucrat who specialises in history, was made the non-economist head of the RBI by Modi to have a “yes man” at the top of the central bank and diminish the institution’s autonomy. Since December 2018, the RBI has become merely a servile agent of the Modi regime without any independent say in the matters of the economy or monetary policy.

The total economic capital of the RBI works out to about Rs 9.6 trillion as of July 2018. In FY 2017-18, the contingency fund stood at Rs 2.32 trillion. Most of the revaluation reserve in RBI’s balance sheet is currency and gold revaluation account (CGRA), which stood at Rs 6.92 trillion. The CGRA is a lucrative option for an economically crippled government and its feral gadflies masquerading as economists.

In the beginning, using their “raw wisdom”, Modi and his close associate Amit Shah, the home minister, tried to get their hands on the larger revaluation amount to meet the fiscal deficit and save the government from external borrowing. However, for the time being, the ECF headed by Jalan stopped them from appropriating the revaluation fund and forced them to satiate their hunger with the much smaller contingency funds. To build up a story behind this utmost disastrous decision, which will have far-reaching monetary implications, the Modi regime started blaming the RBI for being ultra-conservative in maintaining reserve funds for contingency.

While globally the norm is to maintain a buffer of 14% of the gross assets, the RBI maintains 28%, which helped the Modi regime to first ridicule it and then force it to part a large chunk of the money. Modi’s close aide and former chief economic adviser Arvind Subramanian criticised the RBI’s approach towards maintaining reserve and risk assessment as “ultra, ultra conservative, almost bordering on paranoia” and he claimed that the RBI can easily transfer between Rs 4.5 to Rs 7 trillion to the Modi regime. While criticising the RBI for being “ultra, ultra conservative”, Subramanian ignored the crucial fact that the RBI has the most resilient financial health among the world’s other central banks. Also, it deals with a larger non-performing asset (NPA) that crippled the lending capacity of public sector banks. Therefore, to tackle the NPA challenge, it’s mandatory for the RBI to keep a larger reserve fund, a problem that people like Subramanian won’t mention to ensure the fallacy of their criticism doesn’t get exposed.

After prolonged deliberation and discussion between the RBI, the Jalan-led ECF, and the Modi regime, it was finally decided that the RBI will pay a higher dividend to the government to cover up the revenue gap caused by a dysfunctional Goods and Services Tax (GST). The ECF advised the RBI that it must keep the contingency fund — also called the “realised equity” — between 5.5% to 6.5% of the balance sheet. As the contingency fund was 6.8% of the balance sheet, the ECF asked to reduce it to 5.5% and the RBI agreed to transfer the balance 1.3%, ie, Rs 526.37 billion to the government’s coffers.

This transfer actually fulfilled RBI Governor Das’s mission. Now, his utility for the government is over, however, it seems that he will be at the post to help the Modi regime withdraw more from the RBI’s revaluation account. The biggest shock was Finance Minister Nirmala Sitharaman’s outright denial of knowing the end-usage of this massive fund that the Modi regime siphoned-off from the RBI’s contingency fund. This is not the first time that the Modi regime is laying its hands on public funds to cover up its utmost failure as a government to maintain a healthy revenue-expenditure balance sheet.

The Modi regime had withdrawn Rs 98.8 trillion from the Consolidated Fund of India (CFI) in July 2019 to meet its expenses for the FY 2019-20 using the brute majority of the Hindutva fascist Bharatiya Janata Party (BJP) in the lower house of the parliament (Lok Sabha). While the government takes this amount from the CFI to meet the expenses of a single financial year, the amount equals to five years of government’s earning at the present rate of direct and indirect taxes. The Modi regime is clearly not able to meet the revenue deficit, the rising expenses and arrest the economic slowdown, as no BJP minister or top decision-makers carry an iota of understanding of the economy. The GST woes are hurting the government’s revenue targets and at this point in time, it’s also spending an enormous amount in a military buildup in Jammu & Kashmir. The public exchequer reels under severe pressure due to the uninhibited approach of the Modi regime in spending money from it for all sort of publicity and economically unproductive programmes.

There are speculations that as Sitharaman’s proposed steps to revive the economy won’t work or encourage the private sector, which subsequent Indian governments made the driving force of the economy, to invest into employment-creating opportunities, therefore, the Rs 1.76 trillion, which the Modi regime received from the RBI, will be used for public spending to boost demand in the economy and fund much of Modi’s ambitious projects to hoodwink the masses. The question of public spending to build up demand following the Keynesian model is, of course, a tested method, however, the bigger question is through which mediums the government will spend and how many employment opportunities it can create as the neo-liberal economic policies have forced the government to push its own economic role and leadership to the backstage and push private capital ahead.

If, in the name of generating demand through public spending, the funds received from the RBI is provided as stimuli to the private sector, especially to Modi’s patrons like the two houses of Reliance owned by the Ambani brothers, Gautam Adani’s Adani Enterprises, etc, or it goes to any sort of bailout programme for the capitalists of a crisis-ridden industry like real estate or automobile, then it will defeat the purpose as the private sector will not utilise the funds to invest in employment-generating projects. It’s imperative that the government invests the money itself and also funds the dried-up accounts of major social welfare and employment generation schemes like the National Rural Employment Guarantee Act (NREGA).

The NREGA had been instrumental in fighting rural distress earlier and provided little relief to the rural poor, though the earning from it was never enough to run a family, yet it acted as a saviour at many places. In each and every budget, since assuming office in 2014, the Modi regime has significantly reduced the budgetary allocation to the NREGA and didn’t expand its scope to include more unemployed people at the time of distress. It’s imperative that the Modi regime revives the NREGA and expand its net throughout rural India to include as many beneficiaries as possible. The government must come up with more such schemes, especially for urban and semi-urban unemployed and the poor.

It’s expecting too much from the Modi regime at the time of an unprecedented economic crisis with a four-decade-high unemployment rate. Though textbook solutions to different types of economic disasters are there, however, implementing them is never an easy job. Moreover, it’s still not known what’s the objective of the Modi regime regarding this huge fund it took from the RBI. Whether it will be reinvested to generate demand at the grassroots or used for a military buildup against Pakistan, in case Modi is planning a conflict over Kashmir, or whether this money will be used as a stimulus fund for the big crony-comprador capitalist patrons of the BJP and Modi, there is no clarity at all. In case the funds are spent in a different way than what’s expected of the government at the hour of crisis, in case the money is looted by the gang of hyper-nationalists and the exchequer is left dry, then India will permeate into a dark pit of an unending financial crisis. This indeed will be the beginning of a bigger problem than a solution to the existing one .