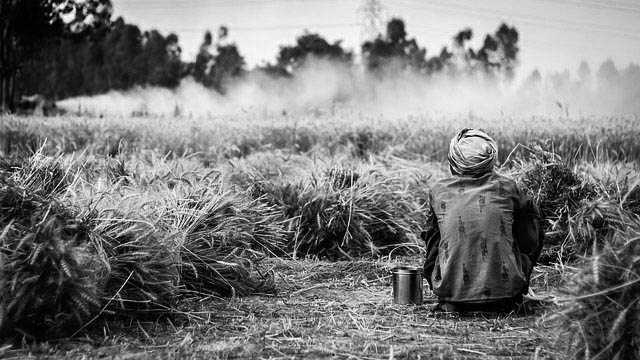 Even after Prime Minister Narendra Modi indicated during his speech on April 14th 2020 that there will be certain relaxations for the rural economy amid the nationwide lockdown, especially for the rabi crop harvesting, the farmers aren’t hopeful as they are scared of a bigger threat than Coronavirus. In Modi’s Bharatiya Janata Party (BJP)-ruled Uttar Pradesh, certain relaxations are allowed to the farmers who want to harvest their rabi crop, especially wheat. But it didn’t ease the farmers’ suffering due to lockdown. On one hand, there is a massive shortage of farm labourers due to lack of transport facilities and, on the other, there is a fear reigning among farmers of suffering huge losses. This fear is triggered by the activities of unscrupulous usurers and middlemen who dominate rural Uttar Pradesh’s agriculture market.

In October 2019, the Modi regime hiked the minimum support price (MSP) of wheat by 4.6%, the lowest hike of Rs 85 per quintal in years, which increased the MSP of wheat to Rs 1,925 per quintal. Though Union Agriculture and Farmers’ Welfare Minister Narendra Singh Tomar told the Lok Sabha on March 17th 2020 that the government is going to hike the MSPs of rabi and kharif crops, nothing is done to end the farmers’ suffering due to lockdown. In Uttar Pradesh, the rabi crop farmers are troubled as the majority of them are deprived of the MSP by the unscrupulous private buyers and middlemen. Uttar Pradesh had fixed a target of 39 million tonnes of wheat production in rabi 2020 but only 20% of the wheat crops are harvested until now.

Hindutva fascist rabble-rouser, Chief Minister Yogi Adityanath’s regime is only buying crops at or above the MSP from the big feudal landlords and rich farmers only, who exert an immense clout on the government and rural political-economy. The middle, small and marginal farmers continue to suffer the worst as they are unable to grease the palms of the bureaucrats. This is the sole reason why the usurers and middlemen from private companies are able to exploit these farmers and force them into distress selling. This year, as the lockdown has rendered the state’s kisan mandis (farmers’ markets) out of the reach of the farmers, and as they can’t afford to store their crops in warehouses, the private buyers are forcing them to part away with the crops at a throwaway price.

At present, instead of Rs 19.25 per kg MSP for wheat, the private buyers are offering between Rs 14.50 to Rs 16.50 for a kg, which is Rs 1,450 to Rs 1,650 per quintal. Adityanath’s regime is doing absolutely nothing to ease the farmers’ suffering due to lockdown and to contain the unhindered rampage of the private usurers. Without any solid plan or intention to help the farmers, the BJP government is suggesting the farmers store their produce at warehouses, instead of carrying them to the kisan mandis, and assuring them that the government will soon set up a call centre to take complaints on MSP violation by the private buyers.

How could the middle, small and marginal farmers afford to keep their produce till an indefinite time in the warehouses? When will the call centre open and when the government will take action on the complaints received? In two months’ time, the kharif sowing will start and then what will happen to the rabi crops? How will the farmers manage funds for their sowing and repayment of debts? Why isn’t the BJP government providing a farm loan waiver for all farmers as well as warehouse charge waiver until the next year? When the majority of the farmers are Hindus, especially from the dominant other backward classes, then why the Adityanath regime isn’t helping them?

Rather than reaching the farmers to buy the produce at a price above the MSP, the government is delivering sermons to the wheat cultivators. India faces an imminent food crisis in the days to come due to the inability of most of the farmers in harvesting their rabi crops. States like Bihar, Madhya Pradesh, Punjab, etc, have been suffering due to either lack of proper harvesting or storing the crops as the farmers can’t approach the non-functioning kisan mandis. The situation is grim in Uttar Pradesh as the Adityanath regime has a very unimpressive track record of buying wheat from the farmers at the MSP, especially from the middle, small and marginal farmers.

According to a report in The Wire, last year, for the procurement of wheat, a total of 6,685 procurement centres in Uttar Pradesh, with 89 centres per district on an average, were set up by the government. Despite these many centres, only 11.3% of the total crop was procured in Uttar Pradesh by the government. Though Uttar Pradesh accounts for 31.4% of the total wheat production in the country only 7% of its farmers get the MSP for their crops. Indeed this 7 % consists of the big feudal landlords, rich farmers and a legion of unscrupulous usurers. Around 93% of farmers are left without the MSP, which makes their lives miserable and pushes them into a brink of indigence.

The farmers’ suffering due to lockdown is concealed by the corporate-controlled press. For them the farmers and their problems, the threat looming on their future, never existed outside textbooks. It’s time for the anti-fascists to amplify the voice of the farmers and keep exposing the sheer crisis in which the food providers of India, especially in the BJP-ruled Uttar Pradesh, are mired due to the government’s nonchalant attitude. Unless the farmers find a respite and a better price for their produce, neither they will survive nor food will reach the plates of those who shrug off the farmers’ agony with absolute disdain.