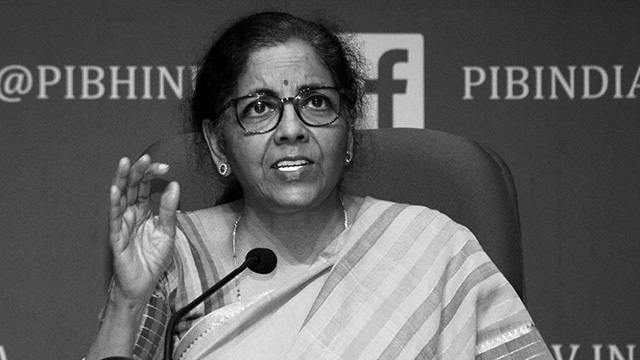 Like her first tranche, Nirmala Sitharaman’s second set of announcements on May 14th 2020, regarding the Rs 20 trillion-worth purported “fiscal stimulus” package announced by Prime Minister Narendra Modi on May 12th evening, didn’t bring any hope or promise relief for the millions of poor in India. We have earlier discussed how the first set of Sitharaman’s announcements focused on mere liquidity infusion, which the Modi regime has cunningly packaged as a fiscal stimulus; the second tranche didn’t break the pattern and, unfortunately for the common people, it carries no real significance, except for some extension of ration services.

If Sitharaman’s second set of announcements regarding the Rs 20 trillion-worth package are analysed, we will see that alike her first tranche, she kept the proposals and schemes mostly centred around increasing credit availability at the gloomiest hour of the Indian economy in the post-world war period. At a time when there is a sub-zero demand of goods and services and the shadow of uncertainty looms large on the lives of the labouring majority, the talk about credit availability won’t break the ice, as it will neither generate demand nor encourage businesses to expand their capacity and employ more people. Most of the industries are working with 33% workforce in view of the “social distancing” norms of the World Health Organization. Capacity increasing or returning to the normal employment level looks like a distant dream at this hour.

So what are the major points Sitharaman’s second set of announcements?

At present, around 6.3m farm loans – worth Rs 870 billion – have been approved by the government. Yet, it’s not clear whether this amount was cleared during the lockdown phase, which is a non-sowing season or is this the total size of pre-existing farm loans. Sitharaman declared that Rs 300 billion-worth additional refinance support will be provided to the farmers as working capital through NABARD, in addition to the Rs 900 billion it already provided, for the post-rabi and pre-kharif season. All cooperative banks and rural banks will be able to disburse such credit.

The major challenges faced by the farmers in the country remained unattended during Sitharaman’s second set of announcements. She didn’t deal with the issue of farmers in getting right prices for their crops, which can be resolved by expanding the government’s fair buying net and buying all types of crops from all sections of the farmers.

Sitharaman even didn’t discuss any provision of increasing the amount of Modi’s scheme of providing Rs 6,000 to each farmer family, registered with the government, on an annual basis, which boils down to Rs 500 per month, less than Rs 20 per day and as per the Census of 2011, if an Indian family’s average size is 4.7 members, then Rs 106 per head per month, or Rs 3.54 per head per day. If the amount can be made Rs 6,000 per month per farmer family, ie, Rs 72,000 a year, then it’d have been of some support in generating rural demand and building “self-reliant India”.

After Modi shared Rs 10 billion from his Prime Minister’s Citizen Assistance and Relief in Emergency Situations (PMCARES) Fund for the migrant workers, Sitharaman’s second set of announcements had a package worth Rs 110 billion for them. She said this amount is spent through the states for 80m migrant workers, who, according to Sitharaman’s estimates, are living a troublesome life in shelters run by the government and different non-government organisations.

This corpus is, according to Sitharaman, already shared with the states for food and shelter provisions of the migrant workers. It’s not clarified when this amount was disbursed if the second tranche of the Rs 20 trillion package was announced on May 14th itself. Also, Sitharaman underestimated the number of migrant labourers. She considered the number as shared by the states and it’s only of those migrant labourers living in the shelters.

Replying to a question tabled in the parliament on March 23rd regarding the number of migrant workers, Santosh Gangwar, the Union minister of state for labour, informed that the total number of migrant labourers in India is around 100m, ie, around one-fifth of the workforce of 500m! Then there will be 20m migrant labourers who will be left out of the benefits of food and shelter under the Rs 110 billion scheme if we consider Sitharaman’s estimate of 80m.

She said that the migrant labourers are registered for manual work in the villages under the Mahatma Gandhi Rural Employment Guarantee Act (NREGA) and nearly 14.62 man-days have been created. The daily wage is fixed at Rs 202 per day. There is no news on how much budget allocation has been increased for the NREGA, when it has been facing cuts and negligence over the last few years, despite a huge demand for jobs under the scheme.

One of the most important points covered in Sitharaman’s second set of announcements is the question of rationing of food grains through the public distribution system (PDS). As per the initial Rs 1.73 trillion scheme that Sitharaman announced in March, the families with below poverty-line ration cards are entitled to an additional 5kg per head food grains and 1kg of available pulse per family, free of cost, for a period of three months till June 2020. This scheme is extended, and its scope is expanded as well.

Now, apart from the BPL ration cardholders, the non-card holders, ie, the poor people who have no ration cards, will also be able to avail 5kg of rice or wheat per head, per month, along with 1kg gram per family per month, free of cost. According to Sitharaman, 80m migrant labourers will benefit from this scheme. She allocated Rs 35 billion for this scheme and asked the states to implement it. What was the basis of allocating such a meagre amount? This wasn’t clarified by the minister or her battery of bureaucrats. How would the PDS benefits identify the beneficiaries and what paperwork complications the latter have to undergo to avail the benefits? Even this question wasn’t answered.

Sitharaman also proposed one nation, one ration, ie, the portability of the ration cards throughout India. She said that a person can get their share of ration from anywhere if they have digital ration cards. However, she didn’t give much clarification. Her bureaucrats informed that even if the family members have withdrawn their share of the ration, anyone living away will get a chance to avail their portion from a local PDS shop. How this scheme will be implemented isn’t known. It’s not clear how could millions of poor who have no papers, linked Aadhaar-ration cards, will benefit under this scheme.

Out of the context, and without clarifying how could it be a part of the fiscal stimulus programme, Sitharaman spoke about the need for building affordable rental accommodations for the poor workers in the cities where they work. She said this can be done in a public-private-partnership (PPP) model. Such accommodation will come under the Pradhan Mantri Awas Yojana (PMAY), she didn’t clarify what amount of money will be allocated for the government for such PPP model project and how soon can that be materialised.

As the migrant labourers have so far fled from the cities, asking the factory owners to build housing projects on a PPP basis isn’t feasible now; it’s also not going to serve the immediate issues. This sudden and arbitrary inclusion of the PMAY in the Rs 20 trillion package is a cheap political trick to lure the poor workers, without clarifying who will oversee the implementation of such projects, what will be the criteria for accommodation and what will be the quality benchmarks of such housing projects, as most of the accommodations made for the poor are often pigeon holes.

Those who have taken the MUDRA Shishu loans – ie, loan up to Rs 50,000 – will get an interest subversion of 2% as a support for 12 months if they come to repay their instalments after the three-month-long moratorium period. There are 30m people who have taken MUDRA Shishu loans, under which Rs 1.62 trillion has been disbursed so far. Total benefit from this, as per Sitharaman, would be Rs 15 billion.

Sitharaman’s second set of announcements also dangled a carrot before the tribal people. She said the states will be allocated Rs 60 billion under the Compensatory Afforestation Fund Act, 2016 (CAMPA) fund. The CAMPA fund will be used for afforestation, wildlife conservation, etc. She didn’t mention how her government has allowed rampant deforestation in Arunachal Pradesh, destroying hectares of forests and damaging ecological balance to build a power plant. The call for tribal employment through the CAMPA fund is a big hoax, as ever since 2016, this fund is used more to fight left-wing extremism in India’s tribal heartlands rather than in the welfare of the tribal people.

Estimating that the total number of street vendors in India to be five million, Sitharaman announced a Rs 50 billion credit line for them, which would help them with capital support of Rs 10,000. It’s not clarified whether such loans will be interest-free. Though she said that no collaterals will be necessary for such loans, it’s not clarified how a street vendor will be identified, and how the loan amount can be decided by the lenders.

According to an old estimation of the Ministry of Housing and Urban Poverty Alleviation, 10 million street vendors operate in India. How could in 2020, Sitharaman halve the number so conveniently? Is there a new criterion or the numbers were revised recently? There is no answer to this.

Housing for the middle class

A credit-linked incentive/subsidy scheme that promises affordable housing for those with an annual income between Rs 600,000 to Rs 1.8m has been operational since 2017. Sitharaman extended it to March 31st 2021 and added Rs 700 billion credit for affordable housing for the middle class. Around 330,000 people have benefited from this scheme so far, and after Sitharaman’s announcement, it’s expected that there will be 250,000 more beneficiaries.

Again, it’s a credit scheme and a wary middle class, which looks at a gloomy future, can’t afford to take further credit when there is no income certainty. Sitharaman’s argument is that such a scheme will trigger housing demand and thereby boost the demand for cement, steel, etc, in the market, however, she is wrong. With an uncertain future, no one will like to take credit for housing at this juncture and, therefore, there won’t be a demand surge.

Another series of half-truths and twisted facts

When Modi announced that there will be a Rs 20 trillion-worth package that will roll out to catapult the country’s economy of sheer crisis, he sparked flames of hope. However, as Sitharaman is spilling the beans, it’s becoming clear that there is no fiscal stimulus package that will help the poor. All that’s on offer is liquidity and credit to middle class, the poor farmers and street vendors. How can distressed people take more loans and repay?

Unsurprisingly, Sitharaman’s second set of announcements failed to address the core issues of the economy, especially demand generation and passing the money to the poor. How will demand pick up and how will the employment graph become better? Sitharaman didn’t bother to answer. It’s evident that in the days to come, more such hoodwinking measures will be rolled out by the finance minister. Hence, it’s imperative for anti-fascists to make the people aware and raise the demand for a genuine fiscal stimulus, economic rehabilitation and financial security. Without the people’s movement, the ilk of Sitharaman will definitely achieve success in creating narratives. It will be an economic catastrophe if no real stimulus is offered.