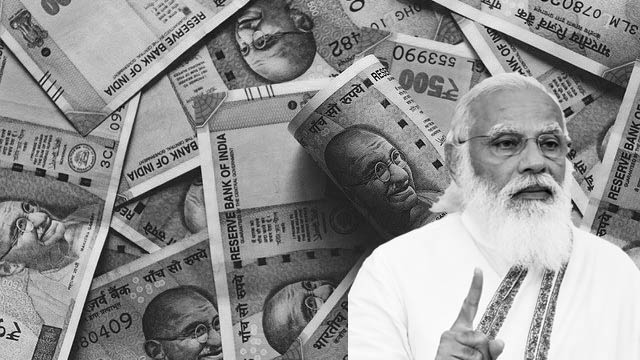 India’s 75th Independence Day is celebrated with quintessential fanfare and jingoism. However, at a time when a Pew Research study showed that India’s middle-income group—whose average daily earning varies from $10.01 to $20—shrunk by 32m in 2020 alone and India’s poor, who earn up to $2 per day, increased by 75m at the same time, who are celebrating India’s 75th Independence Day? Who else but those corporates and their crumb collectors who have immensely benefitted from cronyism under Prime Minister Narendra Modi’s rule.

In response to a Right to Information (RTI) query on how much of total non-performing assets (NPA) or bad debts were written off by the Indian public sector banks in recent years, the Reserve Bank of India (RBI) informed that it doesn’t maintain the record of total “bad debts” but provided the reduction in the NPAs for the PSBs in the financial year (FY) 2018-19, 2019-20 and from April to December 2020 due to write-offs.

From April to December 2020, the PSBs collectively wrote off Rs 781.47bn of NPAs. Nearly one-third of the NPAs was written off by the SBI, Rs 258.27bn, followed by the Bank of Baroda’s Rs 88.54bn, the PNB’s Rs 86.49bn and the UCO Bank’s 74bn. The lowest write-off during this period was by the Punjab and Sindh Bank, which removed Rs 40m from its loan book.

As the RBI doesn’t share the name of beneficiaries of such NPA write-offs, hence, it’s impossible to ascertain which entities benefitted the most from such generosity exhibited by the PSBs. However, as the PSBs don’t have any policy so far to provide debt relief to families whose sole earning members succumbed due to the COVID-19 pandemic and continue to chase the bereaved family members for repayment of outstanding loans, it’s clear that such small-ticket borrowers didn’t benefit from the write off spree.

According to the banking policy in India, the unsecured loans given to individuals without co-borrowers must be paid back through lumpsum payment to the lenders if the borrower dies. No leniency is shown on humanitarian grounds by the banks to the borrowers’ families. Then who are benefitting from these NPA write-offs, if not the big-ticket corporate borrowers?

What was behind this miraculous reduction? Also, the net debt of the company rose from the new figure of Rs 1.50 trillion to Rs 1.61 trillion on March 31st 2020, which means that RIL received new loans worth Rs 110bn during the same period. It’s not clear how much of this amount came from the PSBs. There are reports that the company is raising a $1bn loan from a consortium of 31 banks for some unknown project.

The SBI is dragging its feet to raise $1bn for the AEL’s controversial Carmichael coal mine project in Australia. There is an ongoing people’s campaign against this disastrous loan to AEL. The same SBI had to write off Rs 1.37 trillion-worth NPAs between April 1st 2018 and December 31st 2020. When the project itself is mired in controversies and faces obstinate resistance from the local people and media, how can the SBI secure its interests?

The Indian PSBs are now merged by the Modi regime to ensure that they can be sold without hassles to private players, the very corporates who didn’t repay their debts. How feasible it is to allow the cat to guard the fish, ie, allowing the corporates to manage the affairs of the PSBs, where millions of common people have their savings deposited? The Modi regime has only provided insurance up to Rs 500,000 to the depositors against their savings, in case a bank goes bankrupt. Who will bear the rest of the amount, if any, isn’t clarified by the government.

As India celebrates its 75th Independence Day and Modi delivered a mundane lecture, full of jargons and cliched rhetoric, from the Red Fort’s podium, it’s time to realise who all can really enjoy “freedom”? Is it the common people who are hounded by the banks if they fail to repay their instalments or loans due to lack of employment or death? Or is it the corporates whose loans are miraculously falling with high NPA write-offs by the PSBs and then they are getting new loans worth billions? Data shows that the much-hyped “freedom” is the freedom to plunder people’s money from PSBs by big corporates. For the rest, it’s a reign of agony and distress. Whatever lies in between is sheer tragedy.