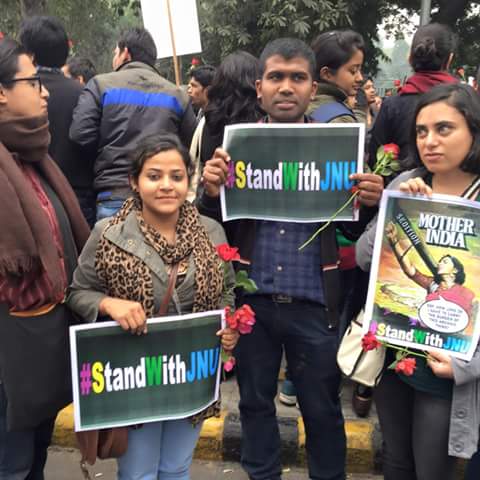 The massive rally in support of the JNU students asserting their right to dissent and opposing the fascist attacks launched by RSS goons disguised as policemen and lawyers upon them rocked Delhi and became a national headline.

A rally by the left-wing students and youth in Kolkata or Kerala is a quite common event, however, in Delhi, a city glued to its elitist and upper-middle-class values and constantly embracing the way of life that World Bank and IMF asks for, a rally with thousands of participants raising slogan against the anti-people Brahminical BJP government is a new thing. It has surely irked many of the upper middle-class subscribers of RSS vision of Brahminical Hindutva.

The JNU incident, the Goebbels type propaganda against it by the corporate media, made it a national issue. The ruling classes also got divided on the issue, with one section vehemently opposing the students and their movements, the other side tried to cunningly bait the students by luring them with ‘constitutional left’ politics.

The government attack on JNU and the hate campaign against it by the RSS activists, online and offline, consolidated the progressive and democratic students of the country against the fascist regime. From Kolkata to Mumbai, Lucknow to Chennai, the students marched in solidarity with the JNU students.

The furore raging against the fascist BJP government over its education policy and unapologetic attempt to mortgage Indian merit to foreign capital has stirred the conscience of the students, mostly those from poor households, from Dalit, Tribal and minority background. The WTO prescribed education policy, which the Modi government wants to enact in order to ensure that the government spending on higher education is minimised to nil, demands that education is turned into a commodity so that only those who can buy it can own it. Pretty capitalist logic of course! You pay for it, you get it.

Despite its eulogised merits, which expert think tanks from Wall Street cubicles continues to gloat on, the biggest flaw of the policy is that it aims to exclude the broad masses of poor people from their right to education. The only education the government is willing to promote is that sort of education where the students are not allowed to critically think and exclaim things. Rather the students will be forced to indoctrination, to make them dogmatic and be obedient servants of corporate capital interests.

JNU has remained a centre of critical thinking in a rather intellectually dry Delhi. Away from the popular culture of the Delhite elites and middle class that revolves around boozing, partying, and spending wealth, a visible trait of most of the campuses of Delhi, JNU students got more involved in discussions related to socio-economic problems of the country and many of them actively joined the struggle to change the system. More students from JNU thought to strengthen the system and became IAS, World Bank and IMF policymakers as well as highly paid analysts of corporate capital. This had been the vivid character of JNU though it has made a handful of left politicians of the mainstream parliamentary and revolutionary trends, however, if analysed properly, it has also created elitist reactionaries, right wing bureaucrats and system administrators for global monopoly capital in large number.

The campus has promoted pluralism and though everyone followed their own career path after the university, the fact is that their engagement with the opposite views through debates and discussions strengthened their right and left-wing views respectively.

This pluralism is under attack from a government that promotes Brahminical hegemony, which alike mediaeval Catholic Christianity or monotheistic Islam calls for absolute unconditional submission of the people to the interpretation of the religion and uncritically follow the caste hierarchy created by the system. Universities like JNU throws up a hard challenge for the RSS and its centrifuges like ABVP, through whom they want to turn the campuses into obedient corporate soldier manufacturing units. The students armed with critical thinking and rationality questions the dogma of RSS, which challenges the authenticity of the Brahminical supremacy. This makes them the enemy of the RSS and subsequently the enemies of the state.

With their lies getting uncovered, their Goebbels type propaganda failing drastically and their bloodthirsty greyhound force comprising of upper caste Hindu journalists, lawyers and executive force of the government that jointly attacked students, physically and institutionally, getting unmasked and mocked in public, the RSS and its stooges are getting more frustrated, their frustration expressed everytime they say something or they try to make anything an issue. Except for the elite upper caste Hindus of Delhi and North India, these goons have no takers of their jingoism among the poor working people and the progressive democratic forces of the country.

The great upsurge of mass discontent that has risen with the issue of JNU all over the country, for the release of Kanhaiya Kumar, against the false propaganda on Umar Khalid, against the arrest of Prof. S.A.R. Geelani cannot be swept under the carpet so easily. The movement that has begun will have far-reaching implications for the politics of the country and will be one of the catalysts to hasten the doom of the RSS fuelled BJP regime.