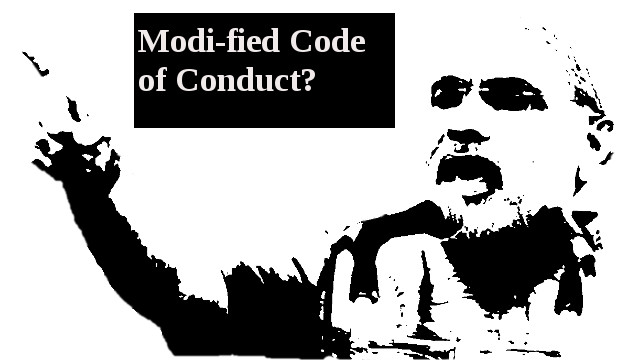 Modi’s jibe at India’s Congress party, criticising its leader Rahul Gandhi’s decision to contest election from Kerala’s Wayanad by using communal rhetoric over “where the majority is in minority” remark, was followed by his lieutenant Shah, who compared Wayanad with Pakistan. In both cases, though the attempt to communally polarise the voters was evident, the Election Commission didn’t find any wrongdoings and allowed both Modi and Shah to continue their uninhibited and boisterous vitriolic propaganda.

When Modi, Shah and a plethora of BJP leaders have been using the army, which is now christened as “Modi’s Army” to lionise the prime minister using vulgar machismo, despite the Election Commission’s initial barring over using the army for electoral gain, the poll body took no decisive step to stop the saffron camp. By citing the death of 42 paramilitary soldiers in Pulwama, Modi shamelessly asked for votes. Then he cited the purported “surgical strike” at Balakote to demand votes, and so on and so forth. If anyone closely monitors Modi’s speeches then they will find that 80% of them are packaged with jingoism and chest thumping over an achievement for which he has no evidence. The rest 20% is chest thumping about development that still remains microscopic and elusive even after five years of his rule, and the banal Congress party and dynasty slamming.

Even if the common people will be able to cite that with even regular political acumen, the Election Commission will continue to vehemently deny the existence of any such blatant MCC violation and usage of communal verbiage during the election. The only time the BJP suffered due to MCC violation was when Uttar Pradesh Chief Minister and serial Hindutva hate monger Yogi Adityanath and the BJP’s Bhopal candidate, Pragya Thakur aka Sadhvi Pragya, a terror accused, were barred from propaganda for few hours. Allowing them to continue to campaign or even contest the polls is a sign of the Election Commission’s capitulation to the might of the Hindutva fascist camp. It’s because the Election Commission is manned by Modi and Shah’s handpicked Hindutva fascism-inclined people, that it has allowed the serial abusers, hate mongers and terror accused to contest the poll and use communal diatribe to polarise their voters on religious lines.

As complaints piled up against the prime minister and the BJP chief, the Election Commission remained tight-lipped, which forced the Congress party to approach the Supreme Court, whose bench ordered the Election Commission to act by 6 May, the day of another round of polling. Quite reluctantly the Election Commission opened the cases against Modi and Shah, and quite unsurprisingly, it started dismissing each of them by pronouncing the duo innocent in each case. Despite some minor dissent in the decisions, the overall unity within the Election Commission in favour of the BJP proved to the Indian people that the earlier allegations levelled by the opposition against the poll body — accusing it of mortgaging its conscience to the RSS-led Hindutva fascist camp — is not unfounded. The minor victories offered to the Congress and the opposition in assembly elections or Lok Sabha bypolls were merely carrots dangled to make the people believe that a real change will be possible through the Lok Sabha election.

It’s imperative to understand that the Election Commission has neither any neutrality nor any independence in Modi-fied India. All the rules and regulations that it create are to harass the opposition and help Modi and the BJP. Therefore, while it can cancel the nomination filed by dismissed paramilitary soldier Tej Bahadur Yadav, who tried to fight against Modi from the Varanasi constituency on a Samajwadi Party ticket, the nomination of Hindutva terror-accused like Thakur, will never be challenged. Though calling out the Congress party a terrorism abetter citing its party chief’s choice of a Muslim-majority constituency is kosher, the criticism of the prime minister’s ardent Hindutva fascist propaganda and vitriol is, of course, a taboo thing.

The Election Commission’s servility and the farcical election it’s conducting prove to the common people that these schemes of changing the government through popular mandate can’t usher the country into a new dawn of democracy, progress and equality. Rather, with the due course of time, if the BJP manages to change the Constitution by 2022, then these farcical exercises will become as much a brutal mockery of democracy as are the elections of the US, Russia, Turkey, etc. To stop the Modi regime from riding on people’s agony to achieve their heinous goals, it’s important to build up massive democratic struggles involving the broad masses of workers, peasants, students and youth, women, marginalised communities and people for the establishment of a real people’s democracy.