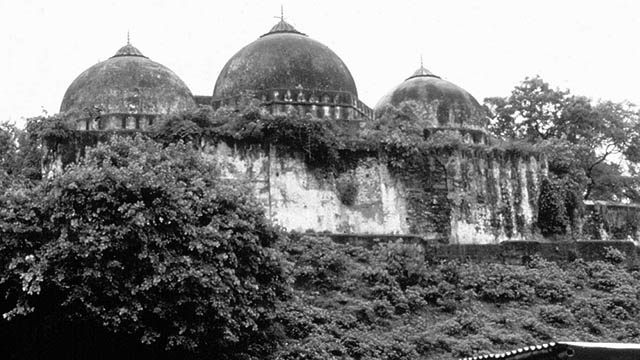 The ghost of Ayodhya is returning after 27 years to torment the conscience of India, after it tore the so-called secular veil of the constitutional Republic to exhibit its grotesque Brahminical core on 6th December 1992. The Supreme Court has reserved its judgement on the Ayodhya dispute over the land on which Babri Masjid — a 15th-century mosque — once stood, after conducting an unprecedented marathon hearing on a civil dispute that has killed thousands of innocent people, mostly Muslims, in the last three decades.

India’s ruling Bharatiya Janata Party (BJP) and other constituents of the Rashtriya Swayamsevak Sangh (RSS)-affiliated Hindutva fascist camp claim that the Babri Masjid was built by the Mughals after demolishing what is called a Ram Janmabhoomi temple, where the Aryan mythological ruler Rama, worshipped as a pious deity by north and west Indian Hindus, was born. The BJP rose to prominence by joining another RSS progeny Vishwa Hindu Parishad (VHP)-led Ram Janmabhoomi movement in the 1980s, which extolled the party’s status and parliamentary tally at the same time.

Though Indian Muslims have had faced discrimination before the Babri Masjid demolition, the epidemic proportion of virulence, which was unveiled post-Babri Masjid demolition, including the state’s unapologetic participation in anti-Muslim pogroms in Bombay and other places, clearly manifested the writ of the unapologetically Brahminical neo-liberal economic order — Muslims have no place in India. Rather than delivering justice to the community that suffered the wrath of the majority community from Ahmedabad riots of 1969 to the Meerut and Bhagalpur massacres, the post-Babri Masjid Indian state apparatus, the polity and even all cultural tools started vilifying the community. Muslims were since portrayed, subtly and overtly, as enemies of the nation.

Since the beginning of the Ayodhya Ram Janmabhoomi movement, the Muslims started realising the bitterness of a Hindutva fascist state. They were no more a community equal before the rule of law; they were no more an equal partner in citizen rights guaranteed by the Constitution. Rather, they became the most-loathed community, equated with the nation’s enemy by the Hindutva fascists then, which is now rechristened as “anti-nationals”. On 6 December 1992, not only was a mosque demolished in Ayodhya by some random thugs but the institution of constitutional democracy was demolished by a group of obnoxious personalities.

The BJP denied that their’s is an anti-Muslim tirade. Rather, the RSS’s limited battery of erudite men tried to whitewash the ghastly crime with jargons of Hindu nationalism, which is essentially a pseudonym of Hindutva fascism conceived as an ideology by notorious fascists like MS Golwalkar and VD Savarkar. They showed the entire agitation that led to the demolition of a place of worship by the Muslims as the resurgence of an awakened and assertive Hindu nation, which wants subservience of Muslims.

Mocking the Constitution, lampooning the provisions that are in the contract between the citizen and the state, the Indian state machinery and all its arms collectively denied the Muslims justice on the issue of Babri Masjid. Neither the perpetrators of the crime were prosecuted in the last three decades nor did any punitive action was taken against the policemen and officials who have collaborated with the Hindutva fascists against the Muslims. The impunity enjoyed by the perpetrators of the gruesome massacre of thousands of Sikhs in November 1984 emboldened the perpetrators of 1992. The impunity enjoyed by the culprits of 1992 emboldened the thugs of 2002 Gujarat pogrom. The Indian state has failed the Muslims so many times.

The Supreme Court will soon pronounce the Ayodhya verdict. The BJP and the RSS are appealing for maintenance of peace after the verdict is pronounced and their utterance is actually a shrilling and layered threat to the Muslims that they must accept an adverse verdict without daring to show any form of resentment. The Modi-fied India is built erecting monuments of lies and myths while demolishing facts, logic and history. So, the rulers prefer the quietness of the graveyard.