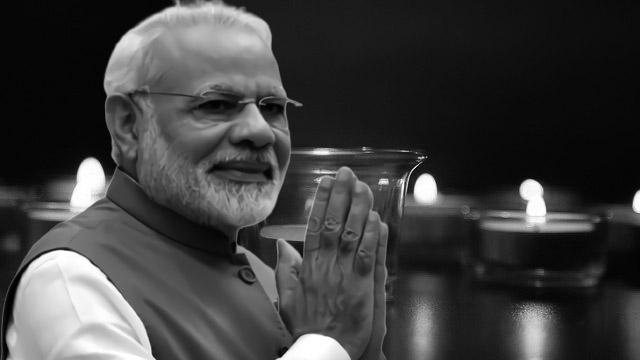 India’s national shame is the sheer mediocrity exhibited by its elites and urban middle class, especially from upper-caste Hindu society, who leave no chance to show their unconditional obeisance towards Prime Minister Narendra Modi . As the world fights the Coronavirus (COVID-19) outbreak, the Modi regime and the ruling Bharatiya Janata Party (BJP) are exploiting the general atmosphere of panic and uncertainty reigning in the country and triggering events that are not only distracting the people’s attention from the government’s utmost failure in containing the spread of COVID-19 in India since January 2020, but also creating dominant narratives that are trapping the entire mainstream opposition, press and the critics of the regime.

After clapping, ringing bells and clanging utensils at 5pm of March 22nd 2020, Modi made the people darken their houses, lit candles, and lamps to show unity against the COVID-19 in India at 9pm of April 5th 2020. Millions participated in the event, following the call of Modi, exhibiting the hypnotism that has captivated them and blunted any ability to critically think and question. People rallied on the streets, created a ruckus, burst firecrackers and raised slogans against COVID-19.

While there is an acute shortage of adequate personal protective equipment (PPE) for healthcare workers at the frontline of COVID-19 in India, when millions of starving poor people are wandering disarrayed in utmost despair after losing their livelihood due to the 21-day-long unplanned lockdown, at a time when millions of migrant workers and their family members are walking for hundreds of miles to return to their native villages — often suffering police atrocities — in a bid to escape their imminent starvation death in the cities and 22 people have died so far in this exodus, celebrating with lights and firecrackers shows extreme social isolation of those with a balcony from those without. It also shows the sheer apathy of the middle class and the elites towards the plight of the poor.

Many poor too joined the bandwagon, with their limited means, but can we blame them, the majority of the population, for this stupidity? Can we blame the poor for being vulnerable to Modi’s cunning propaganda? Can we label everyone who came out on the streets with torches or lit candles and lamps on April 5th a BJP worker? Will this justify the utmost failure on part of the opposition to create an alternative narrative or to provide the people with leadership? No, it won’t. We can’t blame the people for the shortcomings and failures of those who are responsible for developing an alternative narrative, to lead the people and not isolate them. But what they have done so far? Absolutely nothing.

The mainstream opposition’s myopic outlook and reluctance to thrust the rapier into the Hindutva fascist propaganda bubble due to their complicity in the crime, and sheer opportunism, provide Modi and the BJP an opportunity to manipulate the people and test the water, time again, to see whether the people will unconditionally abide by the diktats. Very cunningly, the Modi regime is also dividing the people according to the leitmotif of nationalism. Those who are following his diktats and doing activities prescribed by the prime minister are tagged nationalists and patriots, while those who are showing defiance are accused of being anti-nationals.

While the mainstream opposition parties have stopped opposing the government vigorously to unite with it during the period of a national crisis, the BJP has incessantly politicised the catastrophe and even communalised it using the Tablighi Jamaat fiasco. The BJP leadership have successfully blamed the Muslim community for the outbreak of COVID-19 in India. They have also blamed the Congress party and others. The bamboozled opposition couldn’t even react properly.

In such a situation, neither it’s a time to remain cocooned, as the BJP will soon roll out the National Population Register exercise along with the Census 2021 to carry out the National Register of Citizens drive, nor it’s the time to mock the poor victims of the Hindutva fascist proselytisation. Rather, it’s the apt time to highlight the government’s failures in containing the outbreak of COVID-19 in India and raise the demands for PPEs for the medical staff, support for migrant workers and food, medical care and social security support for the poor and toiling masses throughout the country by at least allocating 5% to 7.5% of Indian GDP instead of the present 1% of GDP in a stimulus package. Unless assertive actions are taken, alternative narratives are built and the Modi regime is exposed through intense political canvassing, nothing can stop Modi and the BJP from continuing exploitation of the captivated minds to farther an obnoxious agenda.