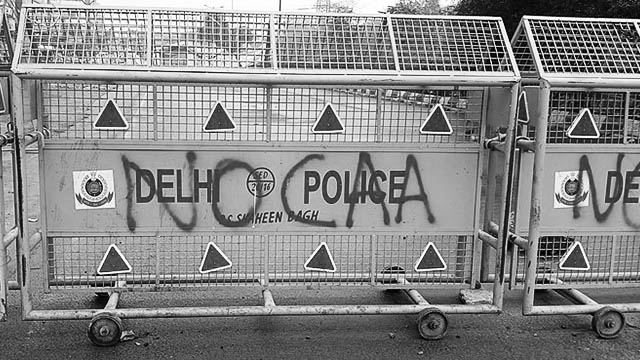 The Delhi Police arrested former Jawaharlal Nehru University (JNU) student and activist Umar Khalid under the draconian Unlawful Activities (Prevention) Act (UAPA) in connection with the Delhi riots––the official name of the Delhi anti-Muslim pogrom––that took place in February 2020. Khalid was arrested at the Special Cell’s office on Sunday, September 13th 2020, after he was called there for questioning.

According to the report in The Hindu, a Delhi Police official claimed that Khalid is slapped with the UAPA as he “was one of the key conspirators of the riot that took place in the city’s northeast in February.” Khalid was earlier accused by the Crime Branch of the Delhi Police for being a key conspirator in the case. Showing utmost servility to Prime Minister Narendra Modi’s regime and the ruling Bharatiya Janata Party (BJP), the Delhi Police is persecuting the anti-establishment voices by accusing them in the Delhi anti-Muslim pogrom case.

Since the 2006 JNU incident, the Delhi Police and the BJP have jointly vilified Khalid and used his Muslim identity to link him to Pakistan. Though the Delhi Police has charged Khalid under colonial-era sedition law for the 2016 JNU incident, the hearing of the case is yet to begin. Based on sheer lies peddled by the BJP’s servile Zee News and the Delhi Police, the JNU incident was a trump card played by Modi and his coterie to vilify the leftwing student movements that question injustice or the occupation of Kashmir. Khalid is now again under the scanner as his religious identity can be used to persecute him.

This crackdown shows the desperation of the BJP to gag the dissenters and to intimidate all those who played a key role in supporting the movements against the Citizenship (Amendment) Act, 2019 (CAA 2019), the National Register of Citizens (NRC)––as proposed by the CAA 2013––and other divisive policies of the Modi regime. The Delhi Police didn’t dare to book BJP leader Kapil Mishra, who played a pivotal role in instigating the anti-Muslim pogrom in northeastern parts of the city, in which, unofficially, more than 100 people, mostly Muslims, lost their lives.

Mishra threatened anti-CAA 2019 protesters in northeast Delhi in front of the Delhi Police’s North East district superintendent. Though his infamous speech has been widely condemned, the Delhi Police, which itself is an Islamophobic and Brahminical fascist force and took part in the pogrom, didn’t see anything wrong in it. Rather it focused on booking Muslims for an anti-Muslim pogrom.

Though the act of intimidation has been carried out to ensure that no future movements are built against the National Population Register (NPR) exercise, which, despite being postponed at the onset of the lockdown in April, is going to start soon with the Census 2021. The NPR exercise will probe people about their antecedents to build an NRC according to CAA 2003 provisions.

The BJP is keen to have the NPR completed soon, so that it can create a large pool of disenfranchised poor workers––sans bargaining power––for its corporate donors. Any sort of movement to boycott the NPR will be detrimental to the BJP’s interest and, hence, it’s cracking whip on political organisers, student activists, intellectuals, etc.

Can the BJP succeed in cowing the people and thwarting any people’s offensive against its sclerotic Hindutva fascist rule? The answer can be found in the future course of people’s movements against NPR and NRC. How the people, getting out of the misconceptions regarding the CAA 2019, peddled by the BJP and its proxies, can fight back against the fascist onslaught, will determine how this high tidal wave of state repression can be reversed and a people’s tsunami can be formed against the citadels of Hindutva fascism.