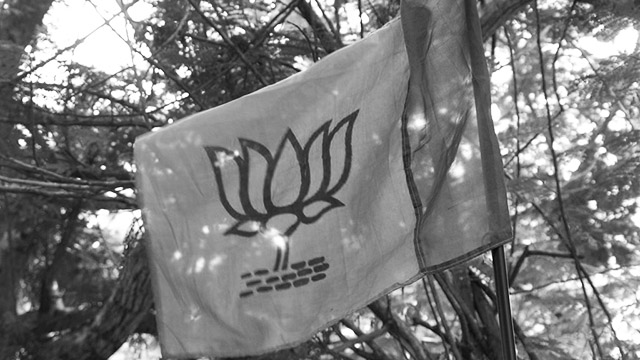 Politics has no linear trajectory but goes through a zigzag course, which makes the praxis dynamic. Any sort of inability in comprehending the dynamism, its nuances and multiple facades that bamboozle the onlookers, will lead to an abyss. Will cause a setback. The vacillation of India’s so-called anti-fascist forces and liberal democrats, including the self-styled “left-wing”, who exhibit moral and intellectual bankruptcy at times, often for petty gains, has been the major cause of the political aggrandisement of India’s Hindutva fascist rulers. The recent scuffle between the Bharatiya Janata Party (BJP) activists and Kolkata Police on October 8th 2020 proved this once again. The BJP’s violence in Kolkata became a viral topic for not just the Hindutva fascist camp, crying foul over police atrocities, but also for those so-called progressive and “left”, who rejoiced the police violence against the saffron camp.

According to West Bengal Government and Kolkata Police, there were men armed with crude bombs and pistol in the rally of the BJP heading towards the state secretariat Nabanna, located in Howrah. The Kolkata Police and Howrah Police erected barricades to stop the BJP’s rally, as per its standard practice, far from the Nabanna. However, unlike previous occasions, the police used bamboo barricades rather than the usual metal ones. When the BJP men tried to break through, a scuffle began, which resulted in the police resorting to baton charge and water cannon charge against the agitators.

During this scuffle, the BJP, as per the government and the police, started violent rampage and pelted stones, bricks and crude bombs targeting the police. The police recovered a 9mm pistol from the spot, which, according to reports, was used in the BJP’s violence in Kolkata. The BJP’s state president Dilip Ghosh claimed that the pistol belongs to the bodyguard of a party leader, who was there in the rally.

The ruling Trinamool Congress is smelling foul play in this incident and it may be further investigated. The police are accused of spraying coloured water at the armed mob trying to carry out vandalism of a large-scale. The BJP workers were marked with colours after they were sprayed with coloured water through the water cannons.

This incident of BJP’s violence in Kolkata and the subsequent police atrocities has two sides and each of them is important to be comprehended.

Firstly, while the National Investigation Agency has slapped terrorism charges against poor daily wage earners in Murshidabad for keeping firecrackers, the BJP’s violence in Kolkata saw rampant usage of crude bombs targeting the police. But none was arrested under any draconian terrorism or sedition laws. Moreover, the Kolkata Police didn’t arrest all hoodlums who assembled under the BJP’s flag.

Secondly, the BJP has been a vocal promoter of police firing against protesters who pelt stones at the police or vandalises public property. The same logic was used to unleash macabre atrocities on the Muslims protesting Prime Minister Narendra Modi’s contentious Citizenship (Amendment) Act, 2019 (CAA 2019), in Delhi, Karnataka and Uttar Pradesh. The police brutally assaulted students of Jamia Millia Islamia University, Aligarh Muslim University, etc, accusing them of vandalism and stone-pelting targeting the policemen. The hyper-nationalist television anchors and their BJP paymasters will bay for the blood of protesters on television screen each evening. But none will speak against the BJP’s violence in Kolkata, as it’s kosher.

Thirdly, the prime minister, while criticising the Congress party and accusing it of provoking anti-CAA 2019 protests, once said, “Those who are creating violence can be identified by their clothes,” to add a communal overtone and attack the Muslim community. On Thursday, when the BJP’s violence in Kolkata reached the peak, Modi neither said that the perpetrators of violence can be identified by their clothes, nor did he or other BJP leaders condemn the violence.

Fourthly, a section of the so-called “left” and “progressives” jeered the police violence against the BJP as a victory against Hindutva fascism. They rejoiced the fact that the police coloured the protesters. This joyous kerfuffle on social media celebrating police atrocity is a manifestation of political myopia and bankruptcy. The police and the BJP may be fighting today but celebrating police atrocities will normalise such illegal acts and, in the future, when the BJP usurps power, the same weapon will be deployed against all democratic movements.

An act like the BJP’s violence in Kolkata must be opposed and condemned but it’s also important, at the same time, to oppose and condemn police atrocities against the protesters.

The police must maintain law and order but have no right to suppress people’s movements or unleash violence. Using coloured water to mark protesters so that they can be hunted down later, is a fascist act that no sensible person can celebrate. This will return to haunt the democratic forces under the BJP’s rule as the police will change the target then and this method will become a Frankenstein.

All democratic forces should, on one hand, oppose acts like the BJP’s violence in Kolkata, oppose and expose the Indian state’s hypocrisy––as it would’ve slapped terrorism charges if such an act was done by left-wing activists, Dalits, or Muslims–-and also oppose the police atrocities. The ruling party will change, but the police will remain, which means, the violence unleashed against the BJP, which was of low intensity now, will multiply manifold when it will target democratic forces in the future. Hence, it’s imperative to grasp the dynamics of politics and act accordingly, rather than acting mulishly.