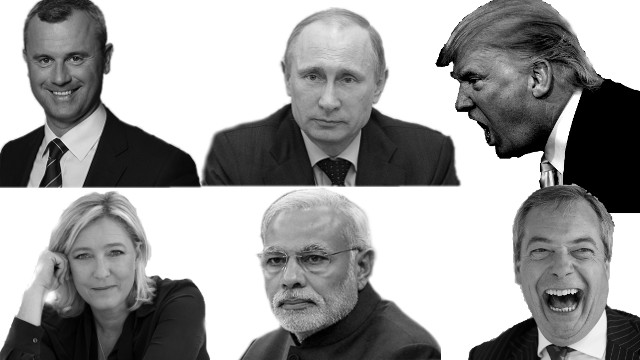 From Donald Trump to Vladimir Putin, from Marine Le Pen to Norbert Hofer, from Nigel Farage to Narendra Modi, the most powerful world leaders are talking about a new world order, and of course, it is not a socialist and egalitarian world order that they are promoting, but a more reactionary and more fascist world order that has a potential to even dwarf the fascist rule of Hitler’s Third Reich.

Despite strong undertone of populism and anti-globalisation stance shown by the Western leaders who strongly vouch for the “anti-establishment” new world order, all they are aiming at is, replacement of one set of corporate rulers with another and replacement of old techniques of oppressing and exploiting the people of the world with new ones; more deceiving and more divisive techniques.

Islamophobia is the new anti-semitism and the people of the US, Europe and countries like India can be stirred up easily by playing Islamophobic card and by broadcasting fake stories on the purported gory atrocities committed by “Muslims”, who are called the ready-made terrorist community in the verbiage used by the likes of Trump, Putin, Marine Le Pen or Narendra Modi, with the latter having dipped his hand in the blood of the slain Muslims of the Gujarat genocide orchestrated by his party and his government in 2002.

There cannot be any doubt that the new world order is the rebranding of the present world order with a new label and packaging to dupe the people as the corporations and the banks that rule the world through a huge military-industrial complex that occupies half of the world, will remain unperturbed due to the coming to power of Donald Trump, Nigel Farage, Norbert Hofer, Narendra Modi or Marine Le Pen.

The corporations and the handful of the capitalist classes will continue to rule the world, but through a divisive political line and an unapologetic xenophobic  agenda, the new regimes will ensure a greater rift between the poor people, the working class, the oppressed nationalities, so that they cannot achieve a greater unity against the enemies of the people and form an alternative power bloc.

Globally, the fascist forces, who are now seeing no future with the doomed globalisation and neo-liberal economic order that the corporate controlled world order led by the US institutions like the IMF-WTO-World Bank promoted since the mid-1980s as the tonic to all economic woes, are using anti-capitalist tones, like the fascists of the post-World War I in Italy and Germany, to hoodwink the working class and then inject the toxins of xenophobia and white supremacy among them so that their class unity can be damaged with a whack. Even in non-white countries like India, the outfits like RSS are promoting Islamophobia and are officially supporting the Hindu supremacist doctrine to drive a wedge between the workers and peasants.

As people cannot be fooled anymore by such rhetoric on neo-liberal economy and globalisation, the concepts of uniting the world under the banner of the US-led corporations and their subsidiaries throughout the world is falling apart. The united resistance of the people against the pro-globalisation and neo-imperialist adventures in Afghanistan, Iraq, Syria and North Korea is gaining momentum and the anti-corporate sentiments are high among the downtrodden people and youth of the Western countries.

The neo-fascists like Donald Trump of the US, Vladimir Putin of Russia, Nigel Farage of the UK or Marine Le Pen in France, are fooling the agitating and discontented people by showing that they are against the same order and are fighting for a world less of poverty, corporate tyranny, media slanders and wars.

However, in reality, as the experiences of the Narendra Modi and Donald Trump administration has shown, the actions of the fascists, after winning power in a particular society using the parliamentary path, never follow their pre-poll propaganda rhetoric, rather they vitiate the existing environment, especially communal and racial harmony using the venom of xenophobia and chauvinism to ensure that the working class and the downtrodden and oppressed sections of the society are weaned away from the path of strong resistance to the corporate controlled establishment.

During his election campaigns, the US President Donald Trump promised that his administration will not act as a global policeman, will not attack other countries and will withdraw the funding provided to all terrorist groups, including the ISIS, in the Syrian war. He did a volte-face as soon as he won power and fired 59 Tomahawk cruise missiles against Syria and sent warships and bombers to the Korean waters to intimidate a reluctant Pyongyang, which refused to give in to the demands of Washington and its regional puppets like Japan and the US colony of the Southern Korean peninsula.

Similarly, Narendra Modi, who claims to be an anti-establishment and pro-poor charismatic leader, only allowed the vitriol against the Muslims in India to grow intensely since usurping power and made it a very institutionalised and mainstream affair to intimidate and kill the members of the minority community by his fascist outfit members. His government and his fascist mentors of the RSS forged a close alliance to transform the pattern of the state’s business and make the entire machinery serve the agenda of the Hindutva forces.

In the UK, the xenophobia and Islamophobia has experienced huge rise and under the Tory regime led by the right-wing fascist hawks like Theresa May and Boris Johnson, the working class and the immigrants are facing the strongest attacks from the institutionalised forces led by big corporations, who are now attacking them on racial ground and by using protectionism as an excuse, going to limit their rights. Brexit campaign by the UKIP led by Nigel Farage kept attacking the EU for the woes of the British working class quite rightly but it didn’t aim to make the movement an anti-EU establishment struggle but just a racist one, with an aim to incite the people of Britain against the immigrants.

The United Russia Party of Vladimir Putin is constantly carrying out anti-Muslim and anti-immigrant campaigns throughout the Russian territory and it is eyeing to revive the Russian imperialist hegemony that was lost due to the breaking of the Soviet empire in 1991. The Russian empire is supporting the extreme xenophobic and fascist white supremacist and Islamophobic forces throughout the world and is using the great Russian chauvinism to fan support to its imperialist causes.

When these powerful people of the world’s fascist camp criticise the establishment and the corporations, banks, etc. then the working class of their respective countries normally gets carried away and considers them as their true representatives. The support that the white working class of the US extended to the Trump camp, the support that Narendra Modi managed to secure by carrying out the demonetisation exercise that turned 86 percent of India’s currency in circulation, useless overnight, were due to the pro-poor rhetoric they used in getting immense support from the downtrodden and poor. It’s a fact that a large section of the politically backward poor considers these fascist servile agents of big corporations and banks as the friends of the poor and enemies of the rich and thereby extended support to their political endeavours.

By criticising the corporate media and by rightly calling them lie-vending machines, these fascist leaders are appealing to the poor and the middle-class who have long despised the rich man’s media. However, in terms of alternative media what the likes of Trump, Putin or Narendra Modi is offering to their people is an utmost servile media, which not only mills lies and slanders to build up mass opinion in favour of the big corporations and their puppet governments, but also incite one section of the poor to fight against another section of the poor by using the overtones of communal, colour, racial or ethnic differences.

The advocates of the new world order are trying to bring the world under an unapologetic regime of tyranny of big corporations and use their power and clout to push the interests of their favourite corporations over that of those that are ruling the world now. From the US to France, from Britain to Russia, from Austria to India, these fascist leaders and strong supporters of a Fourth Reich type order are trying to transform the world from worse to the doom with their nefarious agenda of divisiveness and vitriol.

A major reason why these fascists are winning throughout the world is the common working people’s disenchantment with the “liberal”-labelled authoritarian and corrupt political establishment that was hitherto funded by the big corporations to keep the public resentment against the imperialist policy of globalisation at bay. As more people are getting vocal against the pro-corporate and pro-rich measures of the establishment, the fascists of the new world order are able to deceive them into believing that they will lead the people to a  state of better quality life and living standards by fighting against the establishment and the powerful.

The alternative power blocs within the right-wing pro-establishment camp are either non-existent or are eroding in the pace of a rocket. Their erosion is not helping the working class or the people though, as the entire support base of such parties and groups are now polarised under the banner of xenophobia by the advocates of the new world order. This is giving a competitive edge to the fascist forces and they are able to assemble a large herd of followers than ever.

It is the time that the left-wing, pro-worker and peasant forces that are truly anti-establishment in their belief and action, to take on these fascist forces in each of their countries and expose their complicity in the crime against humanity committed by the very establishment of power and wealth that they pretend to attack. The threads that tie the leaders like Trump or Putin with the omnipotent corporations that rule the world must be exposed and the efforts of these leaders to stir up conflicts by using Islamophobia and pro-Zionist policies must be fought hard to save the future of the planet.