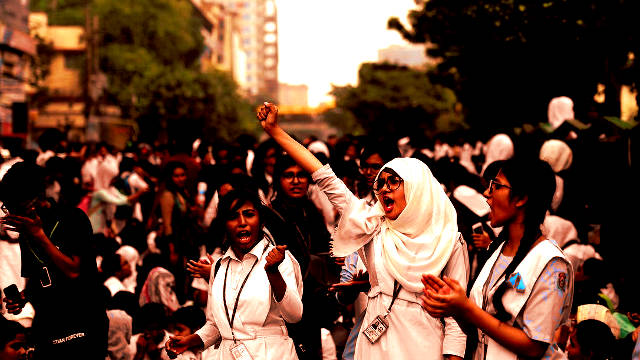 Little boys and girls, as young as 10-11, are holding hands and creating barricades on the streets of Dhaka, managing traffic without any formal training but with so much efficiency that the entire traffic menace of Dhaka, where reaching one end to another would have taken five hours earlier, is more or less resolved. The student agitation started when two school kids were mowed down by a vehicle on their way back from school on 29 July. Thousands of Dhaka school students hit the street when a minister of Sheikh Hasina-led Awami League Government, Shahjahan Khan, claimed that the death of those two children wasn’t a big deal by comparing the road accident death toll of Bangladesh with India, where it’s quite high.

The insensitive comment by Shipping Minister Shahjahan Khan and the literal challenge of dodging death while reaching their school forced the children to take up the Herculean task of rectifying the traffic mess in their own hands. Despite schools threatening them with T.C. and the government threatening them with dire consequences in implicit terms, the students of Dhaka were not cowed, rather their movement became epidemic with students from one after another school joining the fray showing their utter disregard to the fascist discipline in which the institutes try to raise and bind them.

Thousands of students not only stopped vehicles on the road and checked the driving license of their drivers, they even didn’t spare the VIPs, the police and even the judges. Their demand for safe roads shamed the policemen who didn’t have a license and they ended the reign of utmost corruption in road transport department, BRTC, that prevails in Dhaka and entire Bangladesh. Unfit public transport vehicles, driven by children as old as 14, with utmost carelessness, were intercepted by the students and handed over to the police for a penalty. The students forced violators to give a written declaration, ten times, that they are driving without a license. Shaming of drivers ended the audacity of the violators, especially the rich and the powerful.

It’s not only that the students cracked down on illegal drivers, they also disciplined the traffic movement by dividing the city roads into different lanes. For the first time in the history of its existence, Dhaka got emergency corridors for ambulances and no one tried trespassing. Buses, heavy vehicles, private cars, taxis, auto rickshaws and cycle rickshaws, everyone got their designated lanes. The disciplined traffic movement not only earned the students fame and respect but also immense support from the common people of the city.

Indian lapdog Sheikh Hasina’s fascist government panicked seeing the growing influence of the student’s movement and road blockades, which started spreading in an epidemic proportion demanding the immediate expulsion of Shipping Minister Shajahan Khan. The movement also demanded safe roads for everyone, regulated traffic, proper licensing of drivers and the end of corruption in transport. The audacious Hasina regime showed utmost disregard towards the demand of the students and mocked the movement as an “infantile” disorder. When the movement gained nationwide and international recognition and became viral over the internet, the government tried to bully the students by pressuring their schools to intimidate the parents of the agitators with transfer certificate issuance (TC), which means expulsion from school.

The students didn’t bow to the threat of TC and they kept their agitation on. Then, lastly, when it couldn’t stop the cavalcade of the young students to become a strong force to reckon with, following the diktat of New Delhi and Washington DC, Sheikh Hasina’s regime unleashed state terror on the little children by commanding the police to baton charge them and fire tear gas shell at their blockades. The students, as young as 10-12, successfully resisted the police repression and fought back by raising unique, abusive and rebellious slogans against the police, the government and the entire system. At places, they held placards saying – “Road Closed, State Under Repair!”, while many students wrote graffitis with sexual slangs used to express their sheer frustration with a corrupt and unapologetic fascist regime.

Slurs and slangs, hurled at the establishment by the little children drew widespread condemnation from the elitist politicians and intellectuals of Bangladesh and West Bengal, who called it below the belt. However, the common people, the toiled masses, who speak the same language and use slangs to express their anguish and frustration, really thumped for the students and their courage to defy the reactionary establishment. A frustrated and disarrayed Awami League deployed the hoodlums of its student body and workers’ body, Chhatra League and Shramik League to attack the agitating Dhaka school students with the support of the police. In different areas of the capital city, the Chhatra League and Shramik League goons attacked the Dhaka school students with iron rods, clubs, hammer and even 9mm pistols. The police remained mute spectators and showed their utmost servility to the ruling party’s goons. The dreaded RAB also remained inactive and allowed the Dhaka school students to be attacked and thrashed by the goons. Many girls, aged between 12-15 were sexually abused or molested by goons of the ruling party.

The attacks on the Dhaka school students and molestation of girls by the goons of the Chhatra League, which followed the template that the rulers used during the Quota Reform movement by a large number of students a few months ago, clearly manifest how bankrupt, ideologically and organisationally, the Awami League has become. The party that boasts of liberating Bangladesh had betrayed the very cause of liberation ever since it usurped power riding on the barrel of Indira Gandhi’s tanks. Now, many decades later, it’s using its past legacy, which was not one, to legitimise its fascist rule, which is only strengthening the Islamist-Salafist militants, the Jamaat-e-Islami and the arch-reactionary Bangladesh Nationalist Party.

With the attacks on Dhaka school students by Sheikh Hasina’s hooligans, hooted by those perched in the highest seats of power, the Bangladesh regime came under a major international condemnation and by exploiting the situation, many Islamist-Salafist groups are since trying to penetrate into the genuine movement and then exploit the vulnerable young minds to farther their own nefarious agenda of Talibanisation of Bangladesh. However, despite their young age and their inexperience in politics, the children of Bangladesh, who are the radiant and brightest future of the country, spoke clearly their minds, condemning the attempts by politicians to usurp the fruits of their struggle and thereby, cutting across gender lines in their adolescent years, they graffitised the crudest and clearest of all slogans – which compared the state and its arm – the police with pubic hairs. When girls and boys, collectively held high the banners that called the state names and dared it to challenge them, they brought a new trend of politics in the society of Bangladesh, which is moving fast towards total conservatism following the Salafist ideology.

Bangladesh may not face its type of “Arab Spring” right away because the Dhaka school students are merely protesting against government indifference and are not fighting with a revolutionary agenda of ousting the unpopular regime. However, the Dhaka school students’ movement for safe streets and justice, just a few months after the fierce Quota Reform movement, and its international repercussions show clearly that the beginning of the end of the arrogant and utmost corrupt, fascist Sheikh Hasina’s regime has ticked. Though the so-called “icon” of liberalism and progress have jailed all her opponents, destroyed organised opposition and secretly collided with the Islamist-Salafist fascists on one hand and the Indian Hindutva fascist camp on the other, to sweep her re-election with absolute ease, a nationwide wave of discontent against the government’s utter disregard for the lives and livelihood of the people of Bangladesh is rocking the boat of Awami League quite ferociously. The popular support that the Dhaka school students’ movement gained is a signal to the fact that the people want to see Sheikh Hasina and her corrupt enterprise ousted.

If Dhaka school students can shatter the myth of Sheikh Hasina’s infallibility and if they can erect a strong challenge for the government to reckon with, then a massive movement of the peasants and workers of Bangladesh, subjugated by feudalism and foreign capital can actually be a lethal force that can hasten the inevitable doom of the fascist regime and free Bangladesh from the yoke of inhuman exploitation and the burden of foreign corporate plunder. The Sheikh Hasina regime, which is selling Bangladesh piecemeal to the big foreign capital and Indian comprador capitalists, is now going to face bigger mass struggles than what it had experienced in all these years. The Dhaka school students have paved the way for larger and fiercer struggles to take a toll on the corrupt regime and shook its pillars vigorously with their small hands. Indeed the working class and peasantry of Bangladesh will be able to demolish the exploitative and corrupt system through their collective action and determination when they rise up to achieve their goal of an exploitation-free Bangladesh, to fulfil the unfinished task of the Liberation War.