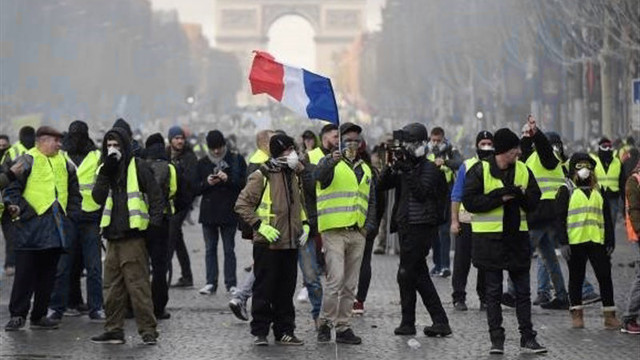 France is on fire as a large contingent of disgruntled protesters are rampaging on the streets and protesting against the pro-rich, pro-corporate policies of President Emmanuel Macron, especially his recent decision to impose an environmental tax on fossil fuel like diesel and petrol, which irked millions of people living in semi-urban and rural areas of France who have no access to good public transport and hence have to commute to work riding their own vehicles.

The protesters, known as Gilets Jaunes, or the Yellow Vests, have taken to the streets and manifested their anger against the corrupt, American poodle Macron by fighting barricade battles with the French police and riot control forces. They have taken control of the city and village roads of France and their anger resulted in the burning down of government properties worth millions of euros.

What made Yellow Vest protesters hit the street and create an unforeseen ruckus? Are the neo-Nazis or the infamous fascists like Marine Le Pen of National Rally (formerly the National Front) providing support to these protesters? Do the protesters belong to the fascist alt-right camp? These are some of the questions that are bothering the players of the French polity and have been making rounds in the French mainstream media.

Yellow vests are actually those hi-vis tops that the French drivers are obliged to carry in their vehicles and use during emergencies. As the entire movement is deeply connected with transport, hence the protesters started wearing the easily available yellow vests in their vehicles and they came out to protest against Macron, who has failed to deliver on his poll promises and has betrayed the working class and the poor of France by adopting policies that would greatly harm their interests.

Citing higher wholesale oil prices globally, the Macron administration has decided to increase taxes on the fuels. But there is a popular anger about the gargantuan taxes on fossil fuel that have risen incrementally since 2014.

According to reports, diesel is due to be taxed another 6.5 cents per litre and petrol by 2.9 cents in France from 1 January. The gas taxes will rise by €0.029 per litre and taxes on diesel— the most polluting yet most popular fuel that is now being proactively phased out from France—will rise to €0.065 a litre.

“I prefer taxing fuel to taxing labour,” Macron said last week. “People complaining about rising fuel prices are the same ones who complain about pollution and how their children suffer.”

This decision has irked the people who are dependent on their own vehicles to reach work as their real wages aren’t increasing in proportion to these huge taxes and thereby, it’s fuelling large-scale dissent against the Macron government in France.

The dissent against Macron, who has no political base or a permanent constituency that he can look up to for seeking support, is spreading in an epidemic proportion and a large number of trade union activists, left-wing forces and farmers have started rallying against the president. The Yellow Vests have become a rallying point for all forces that are against President Macron’s tyrannical rule and anti-people policies.

The Yellow Vests are claiming that they’re against the higher taxes on fuel, as with each increase in taxes, the people find it very difficult to meet their expenses, due to fast falling real wages. In France, the cost of diesel rose by 23 per cent and the cost of petrol rose by 15 per cent in the past year. One more hike effective from 1 January 2019 would be a real blow to their monthly expenses.

Overlooking the demands of the protesters, the government is busy in popularising its own schemes of switching vehicles. The economy minister, Bruno Le Maire, has been vigorously promoting the Macron government’s financial incentives for those who switch to ecological fuel. These include a rebate for owners who trade in their old vehicles for more environment-friendly automobiles.

The government is also promising to pay an ‘ecological bonus’ for those who rent or buy new electric vehicles. However, according to the Yellow Vest protesters, such type of incentives won’t help them in the short term as switching the models will be a costly affair for them as not much of electric car charging infrastructure has been built in rural or semi-urban France. This is one of the reasons that they didn’t give up their struggle despite several persuasion from the government.

While the government is saying that it’s imposing taxes on the fossil fuel to curb its usage and phasing out of vehicles running on diesel and gas by 2040, the Yellow Vest protesters are clarifying that their struggle isn’t against the environmental protection pledge by France, rather their anger is fuelled by the fact that the government is not entirely using the amount that it collects in the name of environmental tax.

Only 20 per cent of the collected amount will be spent on clean fuel, while the rest 80 per cent will just vanish from the system. The Yellow Vest protesters are also opposing the unjust system, where the Macron government is imposing a heavier burden of taxes on the poor and the middle-class while providing excessive tax reliefs to big corporate houses.

When a survey poll by Elabe for BFM TV suggested that more than 73 per cent of the French population support the agitation and 70 per cent people want the fuel taxes scrapped, the mainstream media and the French government tried to demean the protesters by calling them fascists, neo-Nazis or supporters of far-right white supremacist, Marine Le Pen.

The vilification of the protesters, even after the French authorities claiming that most of the violence and vandalism were incited by anarchists known as ‘casseurs‘ or rioters, who have members from both ultra-left and ultra-right, shows that the French government is trying to isolate the Yellow Vest protesters and their just demand by exploiting the majority of French people’s hatred towards fascism.

Though there are a lot of right-wing thugs inside the Yellow Vest movement and many of them have utilised the chaotic situation to carry out arson and rioting, the overall movement of the Yellow Vests isn’t fascist but popular in nature. The discontent against the mainstream political establishment is so strong that even Marine Le Pen and left-wing Jean-Luc Mélenchon of France Unbowed couldn’t persuade the Yellow Vests to give up their anti-government militant protests. Labelling the whole bunch of Yellow Vests fascists didn’t help the Macron government in taking away the wind from their sail.

During their street demonstrations, a large number of Yellow Vest protesters joined hands, hooting and cheering, with the left-wing labour unions that supported their struggle against the rising fuel price. The Yellow Vest protesters have actually pulled in a nationwide support from all progressive, left-wing and democratic forces, and in many places, they’ve been joined by the left-wing youth, unlike the neo-Nazis and fascists who have supported order, instead of anarchy.

More than 280,000 protesters have been participating in this new movement of France, which is changing the way the world perceives the problem of the fuel price hike. By intensifying their struggle throughout France, by not heeding to those in the Alt-Right who are claiming to support the agitation but trying to stab it in real, the Yellow Vest protesters and their allies like the left-wing trade unions, youth organisations are proving that a united people’s resistance against imperialism can seriously damage the boat of neo-liberal economy and force a government to retreat.

France has always shown the way to the world on how democratic struggles are carried out, how revolutions and rebellions are done. No wonder, the people’s movement against the fuel prices will also become a model protest for the future generations to follow.