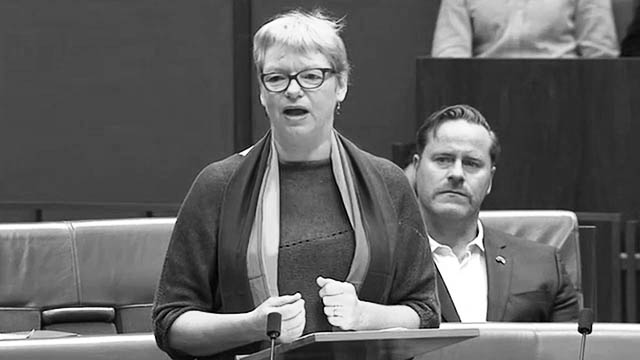 Speaking on the floor of the Australian Senate on 1 December, Senator Janet Rice denounced India’s Rashtriya Swayamsevak Sangh (RSS) paramilitary as “fascist” and declared that Australia’s High Commissioner to India, Barry O’Farrell, should resign for his recent meeting with the current RSS chief.

“I had the privilege recently of speaking at two roundtables organised by the Humanism Project on human rights in India and particularly the concern that we have, as my speech was about, the RSS, which is a fascist organisation that openly admits admiration for Adolf Hitler and the appalling genocide that occurred under his Nazi regime,” stated Rice. She continued:

“The contemporary RSS rides roughshod over people’s human rights. Time and time again, the RSS has attacked Indian people’s rights to freedom of expression, freedom of religion and safety. Their advocacy of a Hindu Rashtra is for an India where, by definition, minorities are denied rights and privileges. They demonise and encourage persecution of some of the non-Hindu citizens of India, particularly those of Muslim background.”

“At the second of these forums, I particularly raised my concern that Australia’s High Commissioner to India, Barry O’Farrell, had recently met with the RSS. He’s only the second senior diplomat from any country to meet the RSS at their offices in recent times. This is a disgrace. We believe that the high commissioner should resign. I’m seeking further information about what advice the Department of Foreign Affairs and Trade provided to him before that meeting. There were a range of speakers from around the world at these two roundtables, including at the second —Mr Raju Rajagopal, Professor Anjali Arondekar and Pieter Friedrich. They provided important perspectives on human rights in India, on international connections and particularly on what we can do next, working together globally, to champion human rights in India. I’m keen to continue this discussion here in this parliament in the new year because I believe that issues related to the erosion of human rights and democracy are things that need to be drawn to people’s attention and for us to discuss here in this national parliament.”

Rice’s remarks came just days after she participated in a roundtable organised by the Humanism Project on the question: “Is India Becoming a Fascist State?” In her comments during the roundtable, she warned that the RSS is “complicit in many human rights violations in India” and expressed concern that “the RSS’s connections to government in India give it access to power while human rights groups have faced tremendous challenges.”

“I think that link between domestic politics, human rights, and international relations, it’s also obviously a critical one in India. To understand the context for recent events in India, we’ve got to focus on the role of the RSS — the Indian Prime Minister, Narendra Modi, himself being a member of the RSS and has described himself as a ‘Hindu nationalist.’ …. When it was first established, the RSS’s founders were inspired by European fascism and the early leader MS Golwalkar wrote of his admiration for Adolf Hitler. Hence, really, why we are here to today….

“We know that the RSS are complicit in many human rights violations in India, from standing with the BJP in detaining two men arrested for allegedly sharing a satirical image of its chief, to failing to denounce acts of violence and potentially inciting and supporting more violence, including, for example, their role in the violent attacks on students at the Jawaharlal Nehru University in New Delhi in January this year.

“What is particularly troubling, of course, is that the RSS’s connections to government in India give it access to power while human rights groups have faced tremendous challenges. Amnesty International, of course, we know recently being forced to shut its operations by the government…. Not unconnected with their reporting on the human rights situation in Jammu and Kashmir. And Greenpeace in India has often suffered government interference. And in previous years, the RSS has held rallies outside of Amnesty’s office. Former Amnesty executive director Aakar Patel was also arrested for criticising the RSS.

“So this is an incredibly important issue that we’re hearing about today. It’s a particular one that comes at a very important time for us here in Australia, because it’s particularly concerning for me as an Australian politician to hear that Australia’s High Commissioner chose to meet with the RSS recently. Our high commissioners and ambassadors, they play such an important role on the international stage as representatives of our country and our values…. Let me be clear: High Commissioner O’Farrell’s visit to the RSS headquarters absolutely runs counter to Australia’s values.”

[Reproduced with style editing. You can read the original work here.]

Pieter needs your support in his research work that exposes the crimes of the Hindutva fascists and upholds human rights. You can directly contribute to Pieter by:

Through GoFundMe.com, where Pieter is seeking to raise $20,000 immediately to lay the financial groundwork for the future. Since launching the fundraiser on November 10th, he has already raised nearly 30% of the goal.

Through Patreon.com, where Pieter is working to build a list of committed monthly donors. In the past week, the subscriber list has grown to 60 patrons.

Or, on a one-time basis, through PayPal.com. In the past week,  56 one-time donors have step forward.