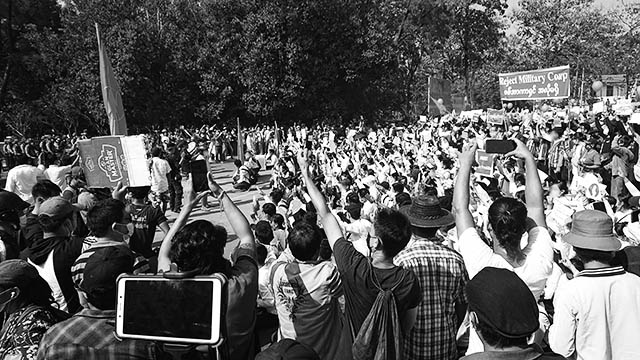 For more than two months, Myanmar is experiencing incessant bloodbath as the military, under Min Aung Hlaing, usurped power through a coup d’état in February, accusing irregularities in the November 2020 elections in which controversial politician Daw Aung San Suu Kyi’s National League for Democracy (NLD) secured 396 seats. The Opposition had first alleged malpractices in the election and the military, Tatmadaw, supported it. Since the Myanmar coup, Suu Kyi and her NLD leaders have been moved to undisclosed locations.

More than 550 people, including children, who protested the Myanmar coup, are killed so far due to the military’s violence. Thousands are wounded. This casualty can be compared with the crackdown of the 8888 Uprising in 1988. Buddhist monks, students, trade unions, etc, have come out against the Tatmadaw’s attempt to subjugate the people and demand the reinstating of democracy. Though the western governments have criticised the gross human rights violations following the Myanmar coup, none of them addressed the issue actively and remained aloof, as they did during the 2016-18 Rohingya Muslim genocide by the Myanmar Army.

Since 1962, when the Burma Socialist Programme Party (BSPP) led by Ne Win usurped power, the military has played a dominant role in Myanmar’s politics. The future of democracy became bleak after a counter-coup by General Saw Maung in 1988, which established the State Peace and Development Council, the Junta that ruled until 2011. However, the Tatmadaw allowed the NLD and other mainstream political outfits to operate in the country. Suu Kyi and others have so far obliged the military, which is evident from her unconditional support to the ethnic cleansing of Rohingya Muslims.

But the Myanmar coup of February isn’t merely a frantic attempt by the Tatmadaw under Hlaing to retain hegemony and thwart Suu Kyi’s so-called attempts at “democratic reforms”. One can’t isolate the Myanmar coup from the geopolitics of the region, where China and the US-led bloc have locked horns over domination. While under the Junta, Beijing enjoyed immense political-economic hegemony, the NLD-led government was jeopardising Chinese interests and was tilting towards western capital for obvious reasons.

China had planned to take away oil and gas from the restive Rakhine province—where the majority of Rohingya Muslims live—to Yunnan and set up the Kyaukpyu Special Economic Zone. But the NLD forced Beijing to return to the negotiation table in 2015 by opposing its 85% stake in the project.

Though the Tatmadaw carried out the Rohingya genocide in Rakhine province to pulverise the local people’s resistance against unbridled plundering of their resources by China and the Central Government, the NLD was keen to allow big US and western capital to enjoy a stake in the resources of Myanmar.

It’s the neo-cold war between the US-led western bloc and the nexus between China and Russia, which triggered the recent Myanmar coup and subsequent violence. India, despite its lip service to democracy, has been a vocal supporter of the Tatmadaw and New Delhi’s diplomatic representatives even took part in the country’s military celebration.

Indian Prime Minister Narendra Modi’s government, led by his Bharatiya Janata Party (BJP), has taken a pro-military stand regarding Myanmar and has been supporting the Junta in destroying all signs of visible dissent. The BJP also supported the Rohingya genocide and runs vitriolic propaganda against the community in India.

There are reports that Gautam Adani, one of the major sponsors of the BJP and Modi, is collaborating with the Junta for some port project. Though Adani Group denied the news outright, it didn’t negate the reporting with any fact-based rebuttal. Russia, the bête noire of the western camp, is also trying to maximise its profiteering initiatives in Myanmar. The Myanmar coup is serving their interests vis-à-vis that of the western bloc that sponsors and supports Suu Kyi.

Suu Kyi, who didn’t mind supporting the ethnic cleansing of Rohingya Muslims in Rakhine province during her heydays in the government, is now made a political “martyr” and there is a global campaign going on to reinstate her as an icon of democracy in Myanmar. It’s less about the Myanmar coup and the aggrandizement of Hlaing and his coterie. It’s about regaining control over the country’s oil resources, gas and military trades. The return of Suu Kyi will help the west and, hence, the west, despite its tall talks on human rights and crocodile’s tears for the Rohingya refugees, has been doing a laundry job to clean the NLD leader’s public image outside Myanmar.

After Suu Kyi is removed, the favours of the Junta have significantly tilted towards China, India, Russia, etc, for their support. Suu Kyi, who used her late father Bogyoke Aung San’s—a former communist who became an agent of Japanese fascists during the Second World War and a British puppet during the post-war years— sham legacy to build her own political identity, was never a crusader for democracy as the west portrayed her. Suu Kyi, like her father, has been quite the opposite to her public image.

She has always been a saviour of the Junta as she prevented the 8888 Uprising from forcefully overthrowing the bloodthirsty generals and proposed for “peaceful” movements instead. Suu Kyi’s NLD tried to open the Myanmar economy to the US and its allies, while she supported the military’s hegemony and remained tight-lipped over its excesses. Suu Kyi even didn’t dare to demand prosecution of the generals for their past atrocities against even the Buddhist majority, forget justice for the 656,000 Rohingya refugees. She even didn’t consider the disenfranchisement of the Rohingyas as a major human rights violation. Yet, she is the champion of democracy for the west.

The Myanmar coup has opened a can of worms in the South Asian country. It reveals how the bitter power struggle over semi-colonies and neo-colonies among the imperialists and expansionist regimes spell doom for the people. The weakened and almost extinct Communist Party of Burma is nowhere to be seen seizing the opportunity and organising the masses against the Junta. The common people, instigated by Buddhist nationalism, pro-democratic sentiments and the middle-class, titillated by the opportunists like Suu Kyi, are all fighting in a disarrayed manner, which is benefitting the Junta.

For Myanmar to experience a real democratic transformation, the Junta needs to be overthrown and not modified according to the convenience of the ruling clique. The NLD and its pro-western allies have lived beyond their expiry period. The tumultuous political arena after the Myanmar coup is best for a new political force that can build an inclusive, confederative, democratic and progressive country by demolishing the forces that oppose the values of democracy.

The military has no place in modern democracy outside barracks and in its present form, the Tatmadaw, originally built by the British imperialists and then by Japanese fascists, must be defeated, decommissioned and a new, pro-people military force, submissive to the democratic institutions of power, should be built for Myanmar’s national security. Without uprooting the Tatmadaw, Hlaing’s Myanmar coup can’t be reversed at all. The only route to peace and freedom in Myanmar is in its uprooting of the Tatmadaw.