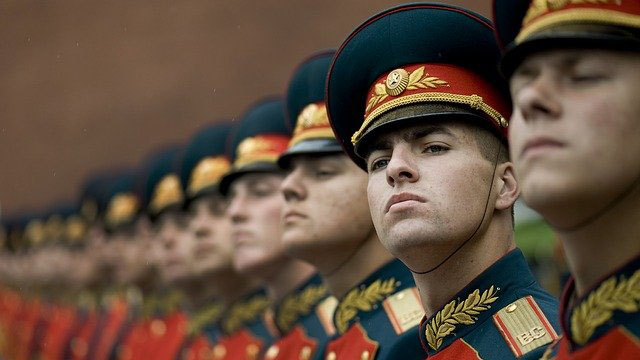 Russia has deployed around 100,000 troops and armoured vehicles near the Ukrainian border, which has triggered panic in the western imperialist camp led by the US and its lackeys like Britain. Following this deployment, the US and its western lackeys have been continuously levelling allegations against Russia. For several weeks, the US and the western European powers are goading the region towards bitter military escalation by blaming Russia.

The Russian annexation of Crimea in 2014 and the war against Ukrainian fascists in Donbas have been cited as reasons for the west’s growing concern over Ukraine. Ukraine’s ruler, Volodymyr Zelensky, a former comedian who promised peace during elections but turned into a warmonger after entering office, has been acting as a puppet of the US ever since he took charge from another US puppet who ruled the breakaway former Soviet republic following the 2014 coup.

US President Joe Biden’s administration is at the forefront of peddling the theory of a purported Russian invasion of Ukraine. Washington DC has alerted its armed forces and is ready to deploy them in Europe, while more than 400 American troops are present in Ukraine at present.

Moreover, the western imperialist bloc North Atlantic Treaty Organization (NATO) has been arming its eastern European and Baltic members to teeth in a bid to deter Moscow from taking any adventurist step in the region. Though Ukraine isn’t a member of NATO, the US-led coalition continues sending Kyiv arms and ammunition to thwart a purported Russian invasion.

Russia has been apprehensive over the US’s attempt to cajole the pro-western and right-wing Ukrainian regime to join the NATO, which will bring the anti-Russian military alliance right at Russia’s courtyard. Moscow’s apprehensions are rooted in the possibility of a NATO member Ukraine disrupting its pipelines transporting gas to Europe.

Russia has developed the $11bn undersea Nord Stream 2 pipeline to transport gas to western Europe through Germany, bypassing Ukraine, due to its troubled relations with Kyiv. Still, a NATO presence in Ukraine will geopolitically threaten Russia and President Vladimir Putin can’t allow the US and its western allies to checkmate him using Ukraine as a pawn.

Earlier, violating its assurance to Russia that no former Warsaw Pact member countries will be poached upon, the US weaned away Romania, Poland, Czech Republic, and even Baltic countries like Latvia and Lithuania into the NATO, and for years, especially after Russia annexed Crimea, Ukraine has been eager to get into the NATO.

Since Russia amassed around 100,000 troops near the Ukrainian border—very few to invade the country—the US and the NATO states have been creating a ruckus. Biden spoke to Putin twice in December 2021, but the talks didn’t help break the impasse. While Putin told Biden that any western sanctions on Russia over Ukraine would be “a colossal mistake”, the latter reportedly warned his Russian counterpart of heavy price for any Russian invasion of Ukraine.

“I made clear to President Putin that if he makes any more moves, if he goes into Ukraine, we will have severe sanctions. We will increase our presence in Europe, with our NATO allies, and there will be a heavy price to pay for it”, Biden told reporters in the US after his telephonic conversation with Putin.

This shows that the US has no intention to resolve the impasse, rather, it’s keen to escalate the tension over Ukraine to divert the people’s attention from rising inflation at home using xenophobic propaganda. Biden has been using hysteric rhetoric while the American media is tempting its Russophobic white middle-class population.

Biden has proposed that apart from imposing severe economic sanctions—including a sanction on semiconductor chipset exports—on Russia, Putin must be personally sanctioned as well. Such proposals of economic sanctions are even not considered feasible by the US media, leave alone the Russians. The Russians have dismissed such possibilities of sanctions on Putin as bluster.

The western mainstream media has been estimating that Russia is going to use its gas supplies to coerce western Europe to stop meddling in its affairs. Russian energy giant Gazprom supplies nearly one-third of Europe’s total gas requirements and any cut in supplies amid the winter can have devastating effects. Even the contingency tankers currently shipped to Europe by the US and its lackeys in the Gulf can’t provide immediate relief due to the lack of proper unloading terminals in Europe.

Russia hasn’t commented on the allegations of its plan of cutting gas supplies to Europe. However, the US media outlets are peddling a lot of speculative narratives on Russia’s gas cut off threat. Dependence on Russian gas, especially the Nord Stream 2 pipeline, has made Germany waver in its response vis-à-vis the US, the UK and other European countries.

Even France has been trying to broker peace to secure Europe’s energy requirements. In Paris, senior representatives of France, Germany, Russia and Ukraine met on Wednesday, January 26th, to discuss the Ukraine peace process. It appears as if Emmanuel Macron, without the ability to stand against his transatlantic big boss Biden, is taking initiatives to de-escalate tensions in Ukraine. However, it seems unlikely that Macron can break the ice going against Biden’s diktat. Putin remained obstinate in his demands during a discussion with Macron.

In mid-December 2021, Russia had prepared and made public a draft eight-point treaty with the US on security guarantees for a peaceful settlement of the Ukraine impasse, after Putin accused Kyiv of organising a genocide in Donbas. The Russians demanded a few key guarantees from the US government to resolve the stand-off over Ukraine.

Firstly, Russia wants a complete halt of NATO’s expansion to the east. Secondly, it wants that NATO stops all military programmes in its non-member states in the region, especially in the former Soviet republics. Thirdly, the US and NATO must pledge that Georgia and Ukraine won’t be lured into the NATO fold. Fourthly, all nuclear weapons stationed by NATO in Europe must be removed. Fifthly, NATO should guarantee that there would be no deployment of weapons capable of hitting Russia along its borders.

The US has reportedly submitted a confidential response to Russia’s eight-point draft agreement and asked it to be kept a secret. However, it’s evident that NATO is rejecting the proposal to draw a red line and is in no mood to halt its annexation spree in eastern Europe and the Baltics.

NATO’s Secretary-General Jens Stoltenberg told the media that Russia’s demand to halt the expansion into Georgia, Ukraine and other former Soviet republics don’t conform with its “core principles”. As Belarus—a former Soviet republic—has been supporting Russia in its troop deployment against Ukraine, the US is now threatening the country with military action. Even Biden’s western European lackeys are following the suit.

Though Ukraine has been denying that Russia is going to invade it with merely 100,000 troops, the US is obstinately preaching the lie that has become a domestic face-saver for Biden. The US is even using a diplomatic row over visa to throw Russian Ambassador to the US Anatoly Antonov out of the country.

As the US and NATO continue to provoke Russia and are carrying out insidious propaganda over a purported probability of Russian invasion of Ukraine, an enraged Moscow has ordered a fleet of more than 20 warships to set for sail in the Black Sea. Russia has also unveiled a plan to build up military partnerships with Latin American countries like Cuba, Nicaragua and Venezuela to further frustrate the US near its home.

Even though the war of rhetoric is ongoing between the US-NATO imperialistic clique on the one hand and the Russians on the other, it’s unlikely that there will be any military confrontation between the US-led bloc and Russia.

Firstly, there will be no war as the west and the US don’t consider Russia as a bitter enemy, a position now held by China and other countries like Cuba, Iran, the Democratic People’s Republic of Korea and Venezuela. The western imperialist powers won’t dare to provoke the Russian bear due to the heavy consequences of such a futile act.

Secondly, though the Ukrainians are important for the west to keep Moscow under pressure, the bond between Russia and China will create major problems for the western bloc. In recent times, Moscow has strengthened ties with Beijing and their collective impetus helped the Taliban to drive the US away from Afghanistan after a 20-year-long war. When former German Navy chief Kay-Achim Schönbach tried to dismiss the hysteria over Russia during a discussion in New Delhi—a controversial comment forced him to resign—he too emphasised upon the fact that the west must use Russia against China and not allow it to strengthen ties with Beijing.

Thirdly, having suffered a major setback in Afghanistan, the US isn’t economically in a position to fight a war with Russia in Europe, which may flare into a world war. Moreover, the unmanaged COVID-19 crisis in the US, the skyrocketing inflation in years and the loss of jobs have made the lives of the common people tough. Less than one in every six persons in the US favour the participation of American troops in case of a Russian invasion of Ukraine.

Despite Biden’s cacophony over the Russian invasion of Ukraine, there are no scopes for any real war to break out. Therefore, even though the US will continue with its ranting over a purported Russian invasion of Ukraine, it will neither engage in war nor will it make any attempt to defuse tension in the region. Rather, it will continue to exploit the situation to its advantage and sell weapons in eastern Europe.

However, for Moscow, it becomes imperative to thwart all risks and carry out strategical self-defence actions to stop the US-NATO expansion spree. The west will continue to peddle its theory of a Russian invasion of Ukraine, but for Russia, rather than being responsive in diplomacy, it’s high time to secure its frontiers from the US-led NATO by bringing more countries out of the west’s influence into its sphere of influence. Only by weakening the western bloc and NATO, Moscow can secure itself from a wide array of enemies in its western front.