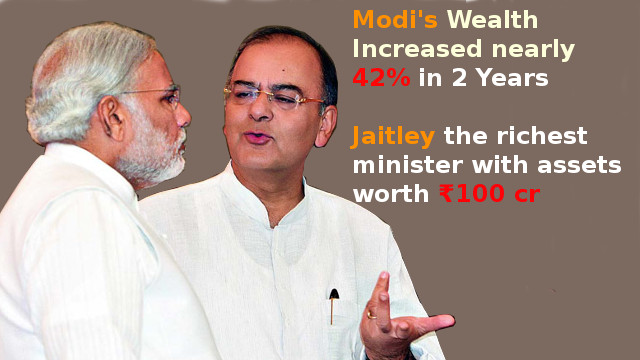 When Narendra Modi started his campaign for the prime minister’s position during the 2014 general election, he and the entire Hindutva camp trained their guns against the Congress Party’s first family, the Gandhis, whom they blamed for all woes afflicting India and also alleged that the family has siphoned-off immense wealth to foreign shores and enriched itself by sucking out the funds meant for the poor people of the country. The internet and the social media contains enough articles, speeches, tweets, videos and posts curated by the RSS-led Hindutva camp explaining, with communal overtone, how the Congress Party’s dynastic leaders have led the country to astray and why India needs a “bachelor” and die-hard Hindu strong man like Narendra Modi, whose soul is incorruptible due to divine reasons, to protect it from destruction and elevate it to a new realm of “better days” in a Hindutva kingdom. The claims and the rhetoric seems to sound very ridiculous within three years of Narendra Modi’s rule, as the personal wealth of Narendra Modi and his coterie consisting of hardcore Hindutva hate-monger corporate and feudal lackeys have swelled manifold as multiple ministers now have multi-crore rupees worth assets in a country where most of the people live in extreme poverty.

According to the latest report published on the PMO website, the wealth of Narendra Modi increased by 41.8 percent in the last two years and now he has wealth worthing nearly ₹2 crores, a steep rise from ₹1.41 crore, the worth of his assets when he became the prime minister in 2014 promising to fight against graft. This, for the information of our readers, is the wealth that’s accumulated by the prime minister by the legal means. Now, unless one is an indoctrinated RSS-influenced Virat Hindu crusader, people know that the undeclared wealth of politicians can be thousands of times more than their legally declared wealth and a man like Modi, who is a favourite lackey of the corporate world, a trusted and subservient orderly of the Ambani-Adani-Tata-Vedanta clique, it’s not a big deal to accumulate more illicit wealth through his loyal services to these giant corporate houses, than what his predecessors and even Dr Manmohan Singh, the former World Bank employee and a trusted lieutenant of the US-led finance and monopoly capital, could earn from their services.

If we see this table, sourced from the PMO website, we will be able to see how the rich ministers, who are indeed footsoldiers of the self-styled austerity promoter RSS, are growing more rich, even in the legal ways.

The finance minister of the country owns more than ₹100 crores worth of assets and still claims he cares for the poor, a majority of who lives their lives on less than a dollar a day. See the wealth, the legally declared wealth of the ministers of the Modi government, how they have grown rich at a time when inflation, receding real income, shrinking employment opportunities, reduction in the interest rates paid on deposits that mostly feeds the senior-citizens, the reduction on rate of interest on pension and provident fund, the excessive taxes burdened on the people and the uniformisation of tax rates in a country where uneven economic growth, prevalent since the colonial period, led to uneven income, and the skyrocketing health care expenses, that throw nearly 600,000 families into utmost poverty every year, are combining to form the juggernaut of neo-liberal economic regime that is helping the poverty graph to reach the North pole. The contrast that exists in the growing disparity of income, not between the super-rich 1 percent of the country who holds nearly 58 percent of India’s wealth, but between the rich ministers and their poor, downtrodden and semi-starving voters, is a stark reminder about how inhuman the present socio-economic and political system is and it questions the very existence of this system that generates poverty, throws people into the abyss of poverty incessantly and therefore, why this system should not be changed?

The act of veneering the accumulation of ill-gotten wealth by the RSS and BJP members in general and Narendra Modi and his coterie, in particular, is cracking open slowly, as more cases of Narendra Modi’s alleged corrupt practices, like his help to the Suzuki motors acquire land in Gujarat, the KG basin corruption  involving the GSPC Ltd, which saw the vanishing of ₹20,000 crore, the assistance to the big comprador and crony capitalists, including the infamous Vijay Mallya, to dupe the public sector banks of billions of rupees, the help extended to the Adani group to evade huge amount of taxes and the biggest of all, the demonetisation scandal, where he let hell loose on the Indian economy by sucking out 86 percent of the cash in circulation with the claim of killing black money, a move that failed on its stated purpose, but became successful in the hidden purpose, which was to actually help the US government’s USAID organisation to push the interest of big finance capital-owned banking and payment system businesses in India, are now showing how corrupt he and his regime has been, always.

When Narendra Modi has been directly and indirectly involved in and has been alleged to be a part of the conspiracies of this magnitude, it’s obvious that he and his sycophants have accumulated a huge amount of ill-gotten wealth. However, their accumulation of wealth, the unapologetic richness flaunted by the RSS’ footsoldiers, the crores stashed as legal money in the closets of the BJP’s ministers, doesn’t bother the conscientiousness of those who would bombard the Congress leaders, lambast the likes of Lalu Prasad Yadav and support the unleashing of CBI against those politicians who refuse to join the bandwagon of the BJP. For them, the rebuttal to dismiss the corruption allegations against Narendra Modi and his coterie is to scream about the corruptions and scandals that the Congress and the previous governments led by it were indulged in. For them, the swelling of the personal wealth of Narendra Modi, Amit Shah or the BJP ministers has nothing to do with wrongdoings, for the corporate-controlled mainstream media, the ownership of multi-crore rupees assets by Narendra Modi and the ministers of his cabinet isn’t something abnormal in a country where worshipping the rich is made the new mainstream trend, therefore, they can easily delete the news of Amit Shah’s wealth growing 300 percent in five years, because a holier-than-thou Amit Shah, accused in several fake encounter cases, cannot earn money through corrupt practices and to accuse him is a blasphemous thing. The zealous RSS proselytiser TV anchors and propagandist columnists will keep yelling at Rahul Gandhi and Sonia Gandhi for being corrupt, will run stories on Karti Chidambaram’s property or Lalu Prasad Yadav’s son amassing wealth. Because, it’s the new fashion to blame the opposition for corruption when the government and the ruling party finds it difficult to defend its own actions.

Our Indian “nationalists” are dancing to the tune of the Japanese fascist resurrector, Shinzo Abe, who promised a high-interest loan to the Modi government, which will use that money to build a bullet train corridor for the super-rich Gujarati comprador traders between Ahmedabad and Mumbai and then repay the money with interest by using the tax payer’s money, i.e. the money of the common people that they pay when they buy even a pack of soap. But they are not asking, none of them indeed, what’s the logic behind taking a loan of ₹88,000 for 50 years, when just 0.1 percent interest and depreciating value of rupee on 3 percent rate every year will make the loan amount ₹150,000 crore at the end of 20 years, forget what it will be in 50? Questions are not asked over the logic behind this move for which the poor of the country will pay their hard-earned money to ensure luxury for the crony and comprador capitalists of a particular region? What benefit will the bullet train bring to the lives of the poor farmers of Maharashtra’s Vidarbha and Marathwada, who are forced to commit suicide due to soaring debts and what good it will do to the working class of the textile industry in Surat or Ahmedabad, who are facing massive layoffs and wage cuts? The running dogs of an empire never critically question their master and the kingdom and this is the success of the BJP and the entire Hindutva camp for that matter, that it has created a large base of such bigot Hindu upper-caste sycophants who will keep lending their support to the tyranny of the corrupt Modi government and its rich ministers only out of their hatred towards Muslims, Christians, Dalits, Tribals and other marginalised communities, oppressed nationalities and exploited people.

When the declared wealth of the ministers and their family members experience growth at a time when the country reels under a painful economic recession, which even caused the employment opportunities to shrink and real incomes to fall, then it becomes evident that the ministers and people in power are getting greased immensely so that they can put forward the cause of the big corporate houses, feudal landlords and other unscrupulous elements. If we see the overall business situation in India, the amount of profits the companies owned by the Ambani group or the Adani group or their foreign investors are sucking out, if we check the amount of money that the RSS and the BJP are spending throughout the country to build up a communal and essentially Hindu narrative around history to distort it and replace it with the mythology propagated by it, then we will know that the amount of money that is making rounds in the saffron camp is huge and the wealth will finally reach the coffers of the notorious fascist hate mongers, who swear allegiance in public to the very nation that they and their masters plunder under the guise of development.

Those who vouch for the personal honesty of Narendra Modi and the entire BJP are the same people, and of course the same people, who get the drops of trickled down development that serves the interest of the comprador capitalists and their foreign corporate masters. The BJP’s rank and file, the toady journalists, the social media troll army, the “proud Hindu” brigade of upper-caste feral mobsters, are all getting their share in the ill-gotten wealth, usurped by the corporate tycoons who own the mines and also advertises on the media platforms. It’s therefore quite predictable that they will keep cheerleading the government and the entire state-establishment of the Brahminical ruling classes to ensure that the flow continues to reach them, and thus, it also becomes evident for the democratic and progressive forces to take up the initiative of building a greater struggle to expose the crimes, corruption and conspiracies, the three evil Cs of the Modi empire, before the people and arouse the them to participate in a broad struggle against the regime and bring it down to usher India into a dawn of progress and democracy.