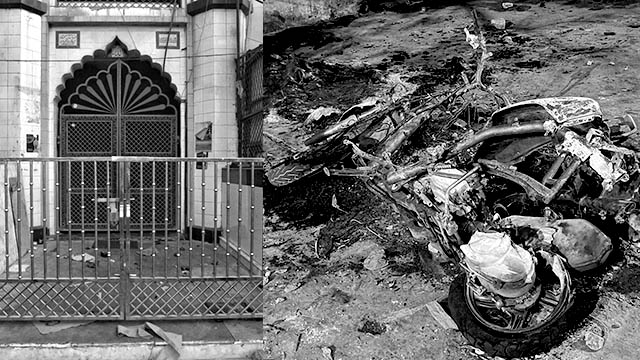 India’s capital New Delhi experienced another bout of communal violence during Hanuman Jayanti celebrations on Saturday, April 16th 2022. Several people, including policemen, were injured in the reckless violence that started in the Jahangirpuri area of the capital city’s North West district.

The situation remains tense in the entire North West district of the city and the mixed neighbourhood areas of North East district, which suffered due to the ghastly anti-Muslim pogrom in February 2020. The minority Muslims have been living in a state of terror, while the police, according to Commissioner Rakesh Asthana, have been on alert to avert untoward incidents.

A large mob of Hindutva fascists, brandishing swords, sticks and other weapons, reached a mosque in C Block of Jahangirpuri under the garb of celebrating Hanuman Jayanti. The participants alleged that the Muslims pelted stones at the rally, which the Muslims have vehemently refuted.

According to reports, two more Hanuman Jayanti rallies by Hindus passed the locality in the afternoon, and there were no untoward incidents. It was a hysteric mob that appeared at around 5.40pm that started a ruckus.

Abuses were hurled at the Muslim bystanders, and the feral mob of Hindutva fascism-incensed men attempted to unfurl a saffron flag atop the mosque forcefully. When the Muslims objected to the act of desecration, a heated exchange of words took place.

The Delhi Police personnel didn’t intervene until the situation worsened, resulting in the rabid Hindutva-incensed mob’s stone pelting at the mosque.

To thwart the attackers, the fasting Muslims started resisting the attack on the mosque, resulting in a massive clash. Alike the 2020 Delhi pogrom, the police personnel took the side of the Hindutva fascist mob, which prolonged the skirmish.

Later, the mob dispersed, only to return occasionally to the venue of the clash to raise Islamophobic slogans.

The police have informed that they are scrutinising the CCTV recordings to ascertain the cause of the clash and find the culprits involved. The police named only Muslims in its report, which spared all Hindutva fascists who assembled at the mosque.

In the meantime, several Rashtriya Swayamsevak Sangh (RSS)—the chieftain of the global Hindutva fascist movement and the parent body of Modi’s Bharatiya Janata Party (BJP)—have started peddling fake news to blame the Muslims for the violence and even claimed that “Rohingya and Bangladeshi infiltrators” were involved in the violence.

The BJP has been using the opportunity to polarise the people of Delhi when the RSS-led mobs have been instigating communal violence all over India against Muslims with an eye on the assembly polls in several states in late 2022 and 2023.

Though the casualties have been low in Delhi’s Jahangirpuri violence during Hanuman Jayanti celebrations, the incident appears as a well-chalked plan of the RSS to instigate communal tensions in the capital city as part of its nationwide campaign against the Muslims.

Incidents of anti-Muslim violence in Gujarat, Karnataka, Madhya Pradesh and Rajasthan have captured headlines for weeks. For the second time in over two years, Delhi is engulfed in severe communal violence.

So far, only Delhi Chief Minister Arvind Kejriwal has appealed for peace. The BJP’s leaders have been attempting to magnify the incident as an organised “Islamic attack” on the Hindu religion; a rickety-yet-effective chimaera used to enthral the upper-caste Hindus throughout the country.

Prime Minister Modi and Union Home Minister Shah remain tight-lipped over the issue, expressing their support for the outbreak of communal clashes, which will eventually help the BJP gain political mileage in the long run.

While Delhi didn’t experience major communal trouble for years, it became a hotbed of anti-Muslim violence and hatemongering ever since Modi’s ascension to power in 2014.

Since the 2020 Delhi anti-Muslim pogrom, many Muslims have been moving out of mixed neighbourhood areas out of fear of violence. They have been relocating to the handful of Muslim ghettos of the city in search of safety.

Earlier, during the 2020 Delhi anti-Muslim pogrom and its investigation, the Delhi Police displayed its unapologetic bias and Islamophobia by arresting Muslims and persecuting them for the violence that specifically targeted the Muslim community.

Community members and Muslim rights activists in other parts of the city have expressed their apprehensions on social media that the Muslims will be singled out for the incidence without any unbiased investigation, and the community will suffer the brunt of the event. Their prediction came true after hours when the Delhi Police selectively arrested Muslim men while obliterating any reference to the Hindutva fascists who assembled at the mosque.

Although Jahangirpuri’s situation is under control after Saturday evening’s violence during Hanuman Jayanti celebrations, it’s hard to predict how and where the next conflagration will happen as the Hindutva fascist camp under the RSS, emboldened by the BJP-led Union government’s patronage, is keen to keep the tempo of communal tension high to keep the people’s focus out of the intensifying economic crisis and inflation.