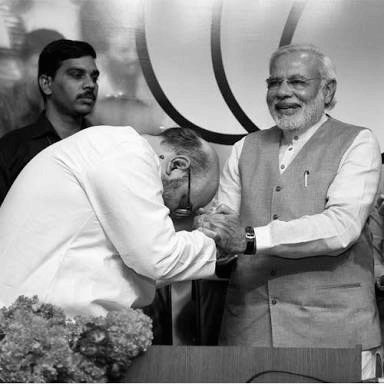 (This article was first published in May 2016 in the previous version of People’s Review. Due to an incident of hacking the old website was pulled down and we could only restore the old articles in this section)

The media galore on the rise of the BJP after its debacle in the Delhi and Bihar Assembly elections is a carefully orchestrated move by the corporate honchos to magnify the BJP as a national party with massive support to the people all over the country, so that a second term can be made easier for the party, which is taking forward the policies of the Congress party without any apologetic gesture or consolation department that was headed by the Gandhi duo, Sonia and her son Rahul, to hoodwink the people. The corporate media is continuously blabbering on the success of the BJP’s “Congress Mukt Bharat” (India without Congress) campaign due to the victory of the BJP in a state like Assam, which is at the brink of a communal flare-up due to the incitement of communal hysteria by the RSS affiliated organisations and the chauvinist Assamese parties that have targeted the Muslims in general and the Bengali-speaking Muslims of the lower Assam in particular as their enemy during the election campaigns. Playing the communal card reaped the benefit for the BJP in Assam, whereas, it returned nothing worthy in the three other states that went to the polls.

The BJP, according to the election result data has managed to win 64 seats out of total 824 of its own that were in the fray across the four states and one Union Territory, whereas the Congress, the ideological compatriot but political competitor of the BJP, managed to win 115 seats in the same fight, leave alone the huge gains made by the regional parties like the AIADMK and the AITMC in the polls. However, to turn the microscopic victory in a state where the chauvinistic spirit was turned on to gain political mileage, the team of Modi and Amit Shah upped the ante and through their social media marketing team launched an aggressive campaign showcasing the forthcoming of a Congress-free India. This is an ideological struggle of the BJP, long known as the pet organisation of the boxer clad RSS bigots, which is trying to show its prominence as a national party despite being a party of the North Indian and especially Hindi speaking upper caste Hindus.

The Congress party, a formidable foe of the Indian people, is shown as a sinking ship at a time when the BJP is trying to usurp the role that the former had played in the last six decades. The switching of allegiance of the corporate and landlord-mafia-black marketer lobby from the fold of the Congress party to the fold of the RSS and BJP has tightened the grip of the latter in the Indian polity and given it a lot of corporate publicity. The doldrums in the lives of the Indian people during the last two years of the Modi regime is being hog washed through a carefully drafted post-election strategy of the BJP, which is trying its best to highlight its rule as a positive thing in India when millions are suffering due to extreme drought, agriculture distress due to regressive agrarian policies, slowing down of the economy due to overstress on foreign investment, and moreover, millions of Tribal people are targeted as enemy by the state machinery working as an outsourced military agency of large corporate mining conglomerations owned by Vedanta, Tata, Essar, etc. In states like Chhattisgarh and Jharkhand, the BJP led governments have dedicated the entire repressive armed forces to evict the Tribal people from their land and jungle so that the same could be gifted to the large corporate bodies at a namesake price or royalty for long term plunder of the mineral resources.

The BJP under Modi and Amit Shah is left with no other option but to intensify its hate campaign on a pan-India basis to polarise the masses from now onwards for the 2019 elections. The Uttar Pradesh assembly elections scheduled for 2017 is the acid test for the Modi regime, which has cunningly played its most destructive communal cards in places like Muzaffarnagar and elsewhere in Western Uttar Pradesh and now trying the same model in places like Agra and Azamgarh using the foot soldiers of the Sangh affiliated Hindutva terror outfits as pawns. The violence will only aggravate in the states like Uttar Pradesh, Karnataka and Gujarat in the next one year as the BJP will try to sow the seeds of communal hatred to reap rich yields of electoral returns. This campaigning on the model of divide and rule policy will have tactical approval from parties like the Congress, Samajwadi Party and others, who would like to fish in the troubled waters for their own vote bank politics.

The mainstream corporate media has dedicated itself to the task of glorifying and magnifying the minuscule gains of the BJP on the broad national screen to build up a favourable upper caste Hindu support base for the RSS and its affiliate organisations and to prepare the soil for the cultivation of 2017 to 2019 polls. This is a sheer conspiracy to present the BJP as an indestructible and undefeatable force in the national polity and to bully the broad masses of Dalits, Tribals, Muslims, Christians and other people and communities suffering due to the Brahminical apartheid practised in the country. There has to be an alternative and strong counter-propaganda based on truth and facts to prick the balloon of lies and despicable campaigns of the corporate media for their favourite pick – the Hindutva brigade. It is the right time for the progressive and democratic forces to reach out to the people, educate-arouse and organise them in the struggle against corporate Hindutva fascism.