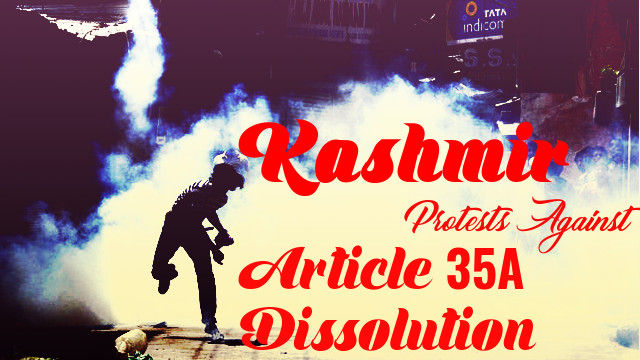 Parts of Kashmir erupted in protests after a rumour about the scrapping of Article 35A of the Indian Constitution by the Supreme Court was spread in the valley, which resulted into massive stone pelting by the Kashmiri youth on Monday, 27 August. A spontaneous shutdown was observed in Srinagar and Anantnag district of South Kashmir, where shops and establishments pulled down their shutters to protest against the purported scrapping of the Article 35A. This article grants special status to Jammu and Kashmir, following the terms and conditions of the Instrument of Accession executed by the former reactionary monarch of the princely state of Jammu and Kashmir, Maharaja Hari Singh. At present, a petition is filed in the Supreme Court regarding the Constitutional validity of the Article 35A by RSS-affiliated people. The Article 35A was incorporated in the Constitution through the extra-parliamentary route of Presidential Order in 1954, which the RSS, the Jana Sangh (precursor to the ruling BJP) and the Hindu Mahasabha vehemently opposed, and stirred up Islamophobia in the post-partition India over Jammu and Kashmir, which reached the pinnacle under Narendra Modi. The apex court of India is yet to pronounce a verdict on the petition.

This massive success of a shutdown called over mere rumours in the Kashmir valley, the massive stone pelting by the youth and incessant clashes between them and the Indian forces exemplify how bitterly the people of Kashmir oppose the conspiracy hatched by the BJP and the RSS to do away with the last layer of a distinct identity that the people of Jammu and Kashmir enjoy, at least on papers. For the RSS and the entire Hindutva camp, dissolving the “special status” granted to Jammu and Kashmir under Article 370 and Article 35A happens to be a pending agenda to fulfil the Indian ruling class’ colonial ambition in the conflict-ravaged region. Though the BJP has raked up support among its Punjabi and upper-caste Dogra supporters of Jammu region on the issue of doing away with Article 370 and 35A by inciting communal hatred against the Kashmiri people who want Indian rulers out of their land, it’s the people of Jammu, especially the Dogras, Kashmiri Pandits and a section of the poor and toiled Punjabis who would suffer immensely if the Article 35 A is scrapped by the Supreme Court.

Behind the so-called “nationalist” motive of scrapping the Article 35A lies the interest of the big builder-contractor-mafia nexus that funds the BJP and the RSS extensively. As of now, only people who belong to Jammu and Kashmir can buy land and property in the region, which keeps the outsiders away from forraying directly in the speculative real estate business. Though Kashmir and Ladakh region have a large section of the original inhabitants, the demography of Jammu was changed fast by the RSS since the partition of India by instigating a large-scale communal genocide of Muslim inhabitants, which killed nearly 100,000 Muslims, the largest so far in India and the one that remains swept under the carpet until now. Soon after the genocide, the RSS and the Maharaja’s administration facilitated the influx of a large number of Punjabi refugees who settled in Jammu and thereby made the region a Hindu-majority one. In the due course, India annexed Jammu and Kashmir by using the Instrument of Accession executed by an unpopular and loathed monarch. Now, as Kashmir remains a troubled spot, the most militarised zone on earth, the real estate sharks wouldn’t dare to invest in the valley but opt for the safer bait- Jammu, which means a large-scale displacement of people and environmental degradation will affect Jammu.

Over many years, the BJP and the RSS have played the Hindutva card in the Jammu region in association with the Hindutva fascist Shiv Sena and Panther’s Party, which polarised the Hindu Dogras, Punjabis and a section of the Sikhs on religious lines and brought a large section of the politically backward people from these communities under the saffron banner of Hindutva fascism. The vitriol against the Muslim community is so deeply entrenched in the society of Jammu that a vicious crime like the gangrape and brutal murder of an eight-year-old Bakharwal Muslim girl, Asifa Bano, not just took place with the active support of Hindutva-incensed feral fanatics, but the crime was also being legitimised by the saffron camp through incessant propaganda and by rallying a boisterous mob, including local upper-caste fascist lawyers, in support of the rape and murder accused. Through social media and by overtly displaying their love for the rape and murder accused, the upper-caste Hindutva fanatics showed that the nefarious scheme of the RSS is paying a huge dividend in Jammu, where the BJP won all seats in the last assembly election.

Now, if the BJP and the RSS can instigate a Hindutva-incensed feral mob to launch violent attacks on the Bakharwal Muslims and other tribal people of Jammu, forcing the latter to flee to either Kashmir or towards Pakistan, then a large tract of land in prime hilly areas will be available to the big real estate mafia, which would bring big ticket donations to the coffer of the saffron camp. The more riots and genocide, the more money will come in, which will mean more men, more weapons and more cycle of pogroms in Jammu. At the end of the day, the people of Jammu will suffer in the violence, bloodshed and turmoil, while the land sharks and the real estate mafia will make billions from their agony. Gradually, with the tribal people, the Muslims and other oppressed people, including the poor and downtrodden Dogra people being exterminated and wiped-off from Jammu, more rich and upper-middle-class people from North Indian plains will encroach upon the state’s real estate and make it their retirement zone.

For Kashmir, the problem will be different. The BJP-RSS have plans to replicate the Zionist Israeli experiment in occupying the Palestinian land by using Zionist settlements. New Delhi already has plans to create settlements for the Kashmiri Pandits under a programme to rehabilitate them back to the valley from where they were forced to flee three decades ago by a notorious nexus between the Pakistan-sponsored Salafist Jihadists, Indian ruling classes and the military establishment. Though the Kashmiri Muslims and the separatist leaders have repeatedly requested the Kashmiri Pandits to return back to their original houses in the valley, the Indian rulers have prevented them from returning by using Islamophobia through various mediums. Under the pretext of rehabilitating the Kashmiri Pandit refugees, a large section of whom are weaned by the RSS-led Hindutva camp by using bigotry-driven propaganda, the RSS and the Modi-led BJP regime in New Delhi is going to make separate colonies for them, followed by settler colonies for former North Indian military personnel, whom the Indian rulers want to play a pioneering role in annexing people’s land.

Despite welcoming the Kashmiri Pandits back to their homes, the majority of the Kashmiri Muslims are extremely discontented with this notorious conspiracy of the RSS and the BJP to divide the Kashmiris into religious lines, which will gradually manifest itself in clear terms very soon. Their anguish, fuelled by the inhuman torture and persecution they’re subjected to by the Indian forces, have turned them immensely reckless regarding the agenda of the Indian ruling classes. Thus, at the smallest pretext, including the rumour about the scrapping of Article 35A, thousands of youth takes up stone in their hands as a token of protest and resistance that millions of bullets, pellets, tear gas shell, baton charge and custodial torture by the Indian regime is not able to break or defeat. The politically-advanced Kashmiri people know that the RSS-driven Modi regime will facilitate measures to curb the bare minimum distinct rights and status they’ve enjoyed and finally convert them into refugees in their own homeland, which is ensuring their protest and struggle to preserve the Article 35A of the Indian Constitution, the Constitution of the very country and identity from which the people of Kashmir seeks “Azadi” or freedom.

The verdict of the Indian apex court on Article 35A of the Indian Constitution will have a deep impact on the people of Jammu and Kashmir, their lives and livelihood. It’s now not a separate and contradictory issue for the Hindus of Jammu or Muslims of Kashmir, rather it’s a concern about the future of people’s identity and their rights. The people of Jammu and Kashmir need to be united to thwart this conspiracy to execute which the Modi regime removed Vohra from the post of Governor and appointed a former BJP leader, an unapologetic Hindutva fascist, at the top post when the state government is dissolved. Only when the people of Jammu will join the ranks of their Kashmiri compatriots and strongly oppose the annexation of their land and properties by the RSS-led Hindutva fascist brigade, that the people will be in a position to defeat the evil nexus between different Hindutva fascist outfits.