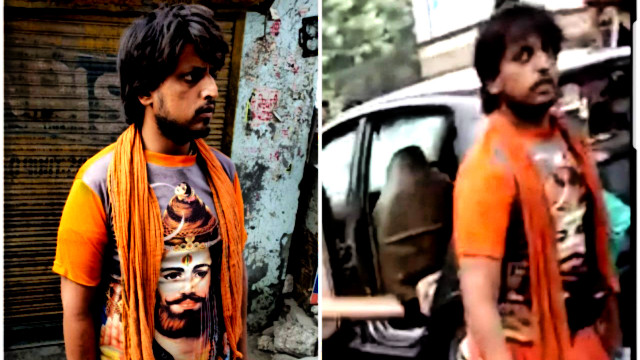 The holy month of Sawan is a month when male devotees of Lord Shiva, the Hindu God, traverse a long distance from their home to reach the river Ganga, dip there and then fetch water from the holy river and rush to their neighbourhood Shiva temples to pour it on the deity. This ritual, called Kanwar Yatra in North India and a man who participate in this journey is called a Kanwariya. Though it is a Hindu ritual, mostly the Dalits and backward caste men participate in it due to their socio-economic position. However, never before have the tradition of Kanwar Yatra came under the scanner of the public opinion as it did in the last 18 years when a gradual saffronisation of the Hindu religious ritual took place under the close watch of the RSS and the Vishwa Hindu Parishad. The recent vandalism by a feral mob of Kanwariyas in Delhi, followed by violence in Uttar Pradesh, where they even attacked the police in Bulandshahr, point fingers to the fact that the RSS has actually transformed a simple religious ritual to an exercise of muscle flexing and assertion of machismo by an organised gang of politically and economically backward young men, for whom the extra power, attention and state patronage they get by becoming the privileged pilgrim, actually gives a sense of aggrandizement and pumps their adrenaline to exert their power.

In West Delhi’s Moti Nagar area, a rambunctious mob of Kanwariyas attacked a couple after their car tried to pass their caravan and slightly hit a Kanwariya. After an argument with the man in the car and one of the Kanwariya, when the man slapped the Kanwariya for abusing his woman companion, a mob gathered and attacked them. The woman, who is the daughter of a CISF officer, had to flee with her friend and seek refuge in the metro station, while the mob vandalised their car in public. The Delhi Police personnel present in the scenario remained a mute spectator during the incident and simply told the Kanwariyas to move on after damaging the car in full public view. The video recording of the incident has gone viral and it clearly shows how the police are hand-in-glove with these goons hiding behind the veils of Kanwariya.

The RSS connection of the hoodlum Kanwariyas is visible in the choice of music played loudly in their mammoth music systems, which are amplified when passing through Muslim areas. The songs praise Yogi Adityanath government for allowing the loud music to be played by the Kanwariyas and rebuked the former Samajwadi Party-led government. Even the electoral debacle of the Samajwadi Party was attributed to the curse of Lord Shiva in the songs, most probably for the ban order on the music system. Apart from the loud and torturous music, the Kanwariyas are also found carrying the national tricolour flag in their motorcycles and vehicles, connecting the idea of India with being Hindu and presenting themselves as “nationalists”. A large number of these RSS men also wear t-shirts bearing photos of Bhagat Singh and other revolutionaries with “Vande Mataram” inscribed on them, though the socialist martyr never uttered the slogan ever.

The RSS influence is exerted through a host of organisations that work in the grassroots in Delhi, Haryana, Uttar Pradesh, Uttarakhand, Bihar, Jharkhand and West Bengal. These organisations inspire susceptible Dalits and backward caste Hindus, mostly unemployed youth, dropped out students and petty criminals to participate in the movement, which gives these people a sense of empowerment through unity and also allows them to seek vengeance from a society that has so far excluded them for their class character. The state patronage strengthens their spirit and they are virtually given a free run, which empowers them to carry out vandalism, attack locals and even police with impunity and due to their “religious identity” and “spiritual quest”, the state will remain aloof from cracking the whip on them.

Following diktats of the chief minister, the Brahminical police force of Uttar Pradesh even warranted the meat traders of Meerut to shut down their shutter during the month-long Kanwariya rally. The police threat also forced many eateries, mostly owned by Muslims, to stop serving their key menu items like biryani, meat dishes and kebabs for the whole month to appease the whim of the RSS men who control the administration and the loyalty of the policemen in Uttar Pradesh.

Not only this naked display of servility, the police has pounded on 250 Muslims of Khelum village of Bareilly, East Uttar Pradesh, by issuing them “red cards”, which say they will be responsible for any communal clashes between Muslims and the Kanwariyas near their village. Many of these Muslims are forced to sign a bond of Rs 500,000 as a symbolic collateral guaranteeing “peace” during the yatra, which now ended. Many Muslim families had to flee following the “red card” issuance and police atrocities against them because they were afraid that in case a communal clash, like the one of last year, erupts near their village, they will have to suffer the state’s wrath for no fault.

The police didn’t rest after forcing many Muslims to flee, they occupied the empty buildings and turned them into surveillance rooms to monitor the progress of the Kanwar Yatra. With a majority of policemen coming from upper-caste Hindu households, it was evident that they will certainly display their bigotry to the Muslim community and leave them to fend for themselves. The Muslims in most parts of Uttar Pradesh have understood that the police, with almost zero presence of Muslims and Dalits, can’t come to their rescue in case they come under attack from the Hindutva thugs led by Yogi Adityanath and other Hindutva rabble-rousers. By instigating a Kanwariya mob in the name of religious rituals and freedom, the Yogi regime in Uttar Pradesh and the Modi regime in India is trying to establish its tight grip on the lives and belief of the majority Hindu community.

It’s time that the ordinary Hindus, the common people who follow the religion, unite against the conspiracy by the Modi regime to exploit their faith and belief in the deity to achieve its own nefarious goals. The ordinary Hindus, the majority of the country who despise communalism and bigotry shared by the RSS-led Hindutva camp, must reclaim their rights on their way of life and their religion, including its rituals and traditions. No forces averse to the national unity between the Hindus, Muslims, Christians, Sikhs and other religions can be allowed to project itself as a representative of a religion against which it works.

By protesting and resisting against the vile activities of the pseudo Kanwariyas promoted by the RSS and by supporting the devotees who are law-abiding and respectful to everyone else, the Hindu community, including the broad majority of backward caste Shudras, exploited and ostracised Dalits and the progressive people from the upper-caste section of the economically backward and exploited classes must forge a strong unity to defeat the communal politics of the RSS and the BJP using their religion and religious beliefs as a subterfuge. All Hindus must raise the fist against the organised vandalism by the feral mob of RSS men under the guise of pilgrims and clearly say – not in my name.