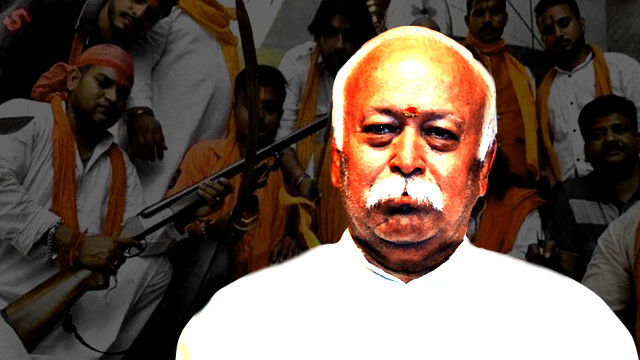 There is a lot of talk lately on the RSS head Mohan Bhagwat’s three-day-long session with toady journalists and Hindutva cheerleader intellectuals to build-up a strong PR campaign before the onset of the 2019 general election, in which Narendra Modi will have to face extreme anti-incumbency waves due to the anti-people policies executed and pursued by his regime since 2014. Citing Mohan Bhagwat’s speech, where he declared that there can’t be any Hindutva without Muslims, many prominent RSS-influenced personalities, even including RSS and BJP officials, have started calling it a shift in the approach of the RSS, or its Glasnost moment with Mohan Bhagwat as its Gorbachev.

The sudden change of tonality by the RSS supremo within a week of the World Hindu Congress, where he compared non-Hindus with dogs and overlooked the thrashing of protesters by the goons of the RSS in Chicago, has not only appalled the onlookers and the Sangh fanatics, it also rang a vexing and eerie alarm amidst an ominous silence. Mohan Bhagwat’s revisionist approach on the political ideology of the RSS propagated by MS Golwalkar, one of the principals of the Indian fascist school of thought, stunned most of the Sangh watchers as for many years the RSS leadership, the legatees of MS Golwalkar’s fascist legacy, have shunned the questions on the “Guruji’s” venomous propaganda against Muslims, Christians and communists. It’s for the first time that Mohan Bhagwat made a strategic shift from the vision of Golwalkar in an open speech to the non-Sangh audience.

Why is the RSS trying to project itself as a liberal, open-minded body, as an organisation that’s ready to compromise on its ideological values for the sake of the society? Is the RSS changing itself and detoxifying its ideology to become acceptable to the majority of Indians? Is the RSS turning its back towards politics and distancing itself from the BJP or the Modi regime?

To answer the questions over why the RSS is changing its tonality now, at a time when the BJP is almost omnipresent in all states of India as a ruling party, except a few, and waiting to win a second term in 2019 and turn India into a Brahmanical Hindutva fascist state officially by 2022, it’s important to understand the crisis within the RSS and the Indian ruling classes – i.e. the foreign corporations, the Indian comprador capitalists and feudal landlords, whom the RSS and its affiliates represent. It’s also important to understand the global problem of the rise of fascism in the context of understanding Mohan Bhagwat’s sudden declaration of change of standpoint.

One first has to understand that unlike portrayed by the mainstream corporate media, the RSS isn’t an organisation of mere apparatchiks trying to pepper hatred in a communally fragmented society. It’s indeed an organisation that truly understands and responds to the thoughts and beliefs of the Indian ruling classes in the post-liberalisation era. The RSS is hard to understand if one use myopic view or analyses its relationship with the BJP and other fascist organisations with a traditional approach of understanding an organisation and its frontal heads. It’s actually beyond that; the RSS is beyond what the regular Marxist can comprehend. It’s an organisation that’s built and operated to bring a radical change in the outlook of the majority of Indians, i.e. the believing and practising Hindus. It’s an organisation, which, with a plethora of decoys cajole the regular, non-controversial practising Hindu to subscribe to its extremely bigot outlook and consider themselves as victims of a purported minority-led war of aggression against their “Hindu nation” and values. The RSS works at the ideological front, constantly building mass opinion in favour of its goal of establishing a Zionist Israel-style Hindutva fascist rule in the country, the BJP is merely an organ that it use to run the government. It knows that to overcome the hurdles on the way, it has to first engage its non-lethal opponents in meaningless and non-effective discourses so that it can have greater leeway to execute its mission.

The RSS, as an organisation, is not bound strongly to an ideology like a communist party. Rather, historically, the RSS has been the most fluid organisation in the international fascist movement. It nurtured different dimensions and forms of a single ideology and then publicly shunned few ideologies to adopt those suitable for its mission. At one point in time it would support the Congress, whenever the ruling classes would tell it to, and at another time, taking a cue from the ruling bloc, it will vehemently oppose the Congress Party. At a time it will not think twice before assassinating MK Gandhi, at another time and venue, it would pay homage to Gandhi and his vision for India.

This fluidity, this adaptability and the ability to change the shade according to the situation like a chameleon make it a favourite lapdog of the Indian ruling classes. The RSS has actually not given up its goal of establishing a Hindutva fascist rule, rather, through rhetoric, demagogy and often self-contradictory babbling, it’s still pursuing its nefarious agenda and apparently it will create subterfuges to discombobulate the people. The more confused the politically crucially upper-caste elites, middle-class and upper-middle-class urban dwellers would be, the more it will be possible for the RSS and its affiliates to twist their opinion in its favour and in favour of Hindutva fascism by inciting communal hatred through vitriol and carefully manufactured propaganda.

This ulterior motive of confusing the middle-class, the liberal democrat section of the upper-caste Hindu society and a section of the elite Muslims who seek a niche for themselves within the Brahmanical framework, actually pays a dividend to the RSS in the long-run. When it called Pranab Mukherjee, the former president, to an event at the RSS headquarters and got him to heap praise on the “socio-cultural” organisation’s endeavour in “nation-building”, something for which even Jawaharlal Nehru, the poster boy of modern “secular-liberal brigade” also praised the RSS, then surely it managed to create a scenario whose political optics have deep implications. The RSS earned itself a distinct tag from the more “political” BJP, by showing itself open to those who have been known as champions of secularism. Many liberals pinned their hopes that Pranab Mukherjee would reiterate and reaffirm his baptism into “secularism” by condemning the Sangh, however, while addressing a crowd of RSS apparatchiks who’ve spent three years in a course under which they went through severe brainwashing and turned into hardcore bigot criminals, Mukherjee could only flatter his host.

Soon after inviting Mukherjee, the RSS chief carried out his propaganda against those who eat beef, compared the non-Hindus with dogs in the World Hindu Congress at Chicago and allowed the RSS goons to publicly thrash and attempt to lynch protesters at the venue of the event during his presence. This endorsement of violence by the RSS chief and his organisation’s continuous efforts to incite communal trouble in Madhya Pradesh’s Mandsaur, Rajasthan’s Alwar, Uttar Pradesh’s Agra, Badaun, Aligarh and Meerut in the last few weeks show that there is no Perestroika in the RSS ranks and Mohan Bhagwat is no Gorbachev trying to dismantle the Hindutva fascism from within. Rather, it’s evident from his continuous volte-face and attempts to woo the liberal democrats and RSS critics that the organisation is trying to wear many hats at a time to hoodwink common people while retaining its hardcore fascist and bigot character.

It must be understood that despite its cacophony over change, the RSS will not shun its Hindutva fascist ideology or embrace democracy and secularism as its values. Though it accepted the verdict of the Supreme Court on the rights of the homosexuals, it didn’t change its homophobic view in reality. The RSS is an organisation that’s rooted deeply into the feudal base of Indian economy. It derives its strength, ideological and organisational, from the feudal institutions and hierarchy of power based on Brahmanical hegemony. Manned by the hardcore feudal Brahmanical elements who are strongly misogynist, the RSS survives on its hardcore Hindutva fascist standpoint and shunning it will hasten the collapse of the organisation as millions of its apparatchiks will turn against it.

Remember, Mohan Bhagwat was not uttering about the importance of the Muslims in a secular framework but in a “Hindutva” framework, which means that the Muslims are needed by a Hindutva fascist state because without them, the very existence of the Hindutva fascist ideology and organisation will come under threat. The Dalits, backward caste Hindus and upper-caste upper-class Hindus subscribe to the ideology of the RSS in large numbers, they support the Modi regime and its Hindutva fascist agenda only because of the Islamophobia that they’ve been fed year-upon-year by the RSS and its affiliates through vitriolic propaganda. The “humanising” of the Muslim, who are given the status of “other” in a “nation” that is affiliated with the Hindu identity, will actually become a catastrophe for the RSS and it will erode its major support base, which will eventually allow outfits like Vishwa Hindu Parishad, Hindu Samhati, Shri Ram Sene, Bajrang Dal, etc. to come out of its influence and work independently, encroaching upon the very territory nurtured by the RSS for years.

Thus, despite Mohan Bhagwat being praised as a Gorbachev of the RSS-led Hindutva fascist camp, there will be no watershed moment in the RSS’ approach towards Muslims, Christians, Adivasis, Dalits and backward caste Hindus as long as it receives monetary and political backing of the big global corporations, the foreign intelligence agencies and the US government. Mirages may be created to hoodwink sundry elements of the liberal-democrat right-wings, however, nothing will translate into any major change at the grassroots because for the sake of its survival, for the sake of retaining its political hegemony and financial benefits, the RSS will have to boost its anti-Muslim tirade through the plethora of outlets that execute its will. In the coming days, especially until the 2019 general election, communal tension will be fuelled, the polarisation of Hindu votes will intensify and massacres may be sponsored because, without this communal agenda, Narendra Modi and his coterie have nothing in their kitty to sweep the election. The RSS’ command over communal polarisation and saffronisation of India’s bureaucracy will be the only rescue for the Modi regime and knowing that a cunning politician like Mohan Bhagwat will never attempt to sabotage the core driving force of the RSS – Islamophobia. Those who will embrace the RSS as a baptised secular-liberal soul will sooner or later be smitten by this venomous serpent.