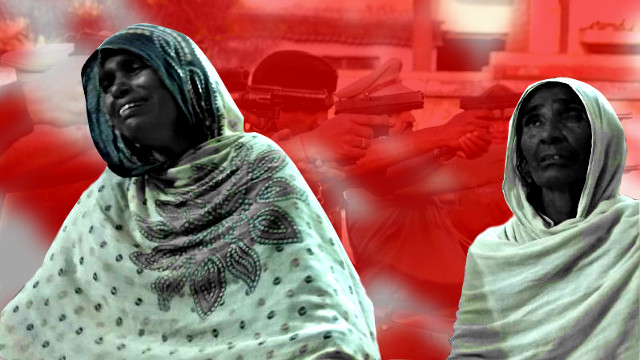 The cold-blooded murder of Naushad and Mustaqeem, two extremely poor Muslim youth, by the Aligarh Police in Harduaganj of Aligarh on 20 September has created a nationwide stir. The police had earlier called a local news channel to record what it called the ambush, which later boomeranged against it as the clips clearly show how an encounter was faked by the police. Now that the Yogi Adityanath-led Hindutva fascist regime of Uttar Pradesh is exposed before the nation as the culprit that has abetted a series of state-sponsored murders under the garb of maintaining “law and order”, especially after the case of Vivek Tiwari’s murder by the Uttar Pradesh Police came out in daylight, the Aligarh encounter case is particularly becoming an albatross around the government’s neck, if not all such staged killings since 2017. Finding itself at the backfoot, the Yogi Adityanath regime and the RSS-led Hindutva camp is doing what it can do the best – attacking those who raise question against its version of the encounter by unleashing a feral mob of Hindutva-incensed goons and policemen.

Naushad (17) and Mustaqeem (22) had been working as kadai artisans to make a meagre living and had never been involved in any police case. They belonged to daily wage-earner families and they were picked up from their respective houses on 16 September afternoon. Mustaqeem’s grandmother confirmed that the police picked him up on Sunday, 16 September, at 2:30 pm from their home and declared him dead in an encounter, along with Naushad, on 20 September afternoon at Machhwa canal near Harduaganj. The police story is quite self-contradictory, including their interception of Naushad and Mustaqeem near Harduaganj, while they were fleeing from Kwarsi Police Station area after stealing two mobile phones and a motorcycle at one go. The presence of the local tv channel at that wee hour to shoot the live “encounter” is still not backed up by the muddleheaded dimwit policemen with any strong alibi. To back its story and men, the Uttar Pradesh Police declared that the victims carried a reward of Rs 25,000 each on their head after the encounter, however, no such information was available in the police database prior to 18 September 2018. Presently, the status of four other men, picked up along with the duo on the fateful afternoon of 16 September, Salman, Irrfan, Yasin and Nafeesh, can’t be known and Nafeesh, according to his family members, is a mentally ill patient under heavy medication, which even didn’t deter the policemen from abducting him.

More than 1,500 encounters are conducted by the Uttar Pradesh Police under the command of the Yogi Adityanath-led Hindutva fascist regime since March 2017. Unsurprisingly, mostly Dalit, Muslim and backward caste men were targeted under this encounter spree and so far 67 people have been killed by the police in these cases. The modus operandi of these state-sponsored crimes remain moreover the same; the police would pick up random men from the minority or other marginalised communities and then they lock them up at undisclosed locations. After a while, the policemen will book these people for major pending cases of their police stations to reduce the burden of investigation. Then they will take these men to some remote location and shoot them. Many would die and very few, especially those with petty cases against them in the past, would be presented alive as wounded. The pattern didn’t change in the Aligarh encounter case as well, except for the video recording of the incident that clearly shows that the entire incident was staged by the policemen.

Finding itself cornered, the Uttar Pradesh Police and the Yogi Adityanath-led Hindutva fascist regime have resorted to collective violent attacks against those who are doubting their narrative on the encounters. The activists of United Against Hate were booked by the Uttar Pradesh Police for allegedly “kidnapping” the mother of one of the victims. The RSS and its accomplices spread malicious content to defame people involved in the struggle for justice, especially they tried to badmouth Umar Khalid and other activists of United Against Hate by spreading deceitful propaganda. Internet and social-media vitriol reached its peak and many RSS men even called the dead duo “terrorists” sympathetic to Pakistan to justify their state-sponsored murders.

As most policemen in the Uttar Pradesh Police come from upper-caste Hindu families with a feudal background, Islamophobia, Brahminical hegemony and fascism are imbibed in them, and thus, they give no consideration to principles of human rights, Constitutional rule and secularism. Their sheer Islamophobic outlook makes them cheer for a bigot like Yogi Adityanath and leads them to execute innocent citizens enmasse to feed the sentiments of the xenophobic Hindutva camp. This deadly force, therefore, tramples upon all civil rights and kills people with utmost impunity. As the Yogi Adityanath-led regime has promised the police immunity from legal proceedings, they have turned Uttar Pradesh into a tyrant police state with the help of big mafia and Hindutva fascist terrorists of RSS and Bajrang Dal. In lieu of their support to the Yogi Adityanath regime, the Hindutva-incensed Uttar Pradesh Police get immunity from prosecution for their crimes like torturing of innocents in lock-up, extortion from criminals and business enterprises, corrupt practices, nepotism in promotion and stationing of men, sexual harassment of women, and such gory crimes.

To ensure that the tempo against all political forces opposing the “encounter raaj” in Uttar Pradesh remain high and they are not allowed any space to voice their concern, the RSS has deployed its hired goons at each locality from where the Muslim, Dalit and OBC men were picked up by the police force and then killed. These RSS goons will heckle any reporter, politician or a social activist trying to visit the family of the victims, who are mostly from the poorest of the poor background. The RSS men along with the local police and BJP activists have also intimidated the family members and neighbours of victims of fake encounters to seal their lips. In the case of the Aligarh encounter, the Bajrang Dal and local police have stopped the grocery supply to the families of Naushad and Mustaqeem, and are forcing them to starve as they showed resilience and opposed the BJP’s diktat of not speaking to the press. The families of Mustaqeem and Naushad are starving since days as they are neither allowed to go for work nor are they allowed to buy any food items from the locality. Even after repeated complaints by several civil rights activists to higher authorities of the Uttar Pradesh Police, the National Human Rights Commission and courts, there has been no respite for the family members of Naushad and Mustaqeem.

When Pankhuri Pathak, a social activist, tried to reach the house of Naushad and Mustaqeem on 6 October 2018, a gang of Bajrang Dal goons, led by the local BJP leaders and supported by the Aligarh Police, launched a violent attack on the woman activist, tried to molest her and lynch her accomplices in public view. The Bajrang Dal men were aided by the policemen, which was recorded on camera by the Pathak herself. The Uttar Pradesh Police continue to unashamedly defend the notorious act by their men at Bhainspada and refused to take any action against the Bajrang Dal men because the policemen are ordered to obey Bajrang Dal’s commands. The Bajrang Dal men have threatened to kill anyone who would come to the rescue of the family members of Naushad and Mustaqeem, or the other four picked up with them. The entry of reporters from non-BJP supporter media outlets is banned in most of the villages of Uttar Pradesh by the RSS and the police are ensuring that the ban remains in force.

The Facebook video by Pankhuri Pathak describing the ghastly attack she and her companions had to face.

How can one defend this killer system and expect that it will deliver justice to the victims? The courts are now filled with men sympathetic to the RSS’ cause of Hindutva fascism, the policemen are baptised in Brahmanical fascism, the RSS stalwarts are running the magistrate offices and other important key departments of the Uttar Pradesh Government, the opposition political parties are reduced to mere signboards with no effective power to counter the government propaganda. The complete collapse of governance and zero liability of the administration towards the common people signal the end of the so-called “democratic” rule in Uttar Pradesh. Now, under Yogi Adityanath, Uttar Pradesh has become the hotbed of communalism, caste violence and patriarchal oppression, which can’t be fought by the parliamentary opportunists like the Congress, the Samajwadi Party and the BSP, rather by a new and strong political coalition of the poor and the oppressed people.

The poor, oppressed and exploited people of Uttar Pradesh, like their counterparts throughout India, have only one path- the path of a massive struggle for democracy, secularism and justice for the majority of the masses, i.e. the poor masses, to liberate themselves from the shackles they’re tied by the Yogi Adityanath-led government, which represents the broad interests of the Brahmanical feudal landlords, foreign corporations and Indian comprador capitalists. Whenever these masses will be correctly led on that path of democratic and anti-fascist resistance, the fortress of tyranny erected by the Hindutva fascist RSS and the Modi-Yogi combo will collapse after crumbling loudly. The killing of Naushad and Mustaqeem in Aligarh encounter and many more in different other staged encounters will act as the propeller that will fan the massive people’s resistance struggle. Because if the poor and the marginalised aren’t taken to the route of resistance, the police will eventually target them to meet its bloodlust. Uttar Pradesh’s poor and exploited will not remain in that slumber that the BJP is forcing them into; their arousal and the fall of the Hindutva fascist regime are both inevitable and imminent.