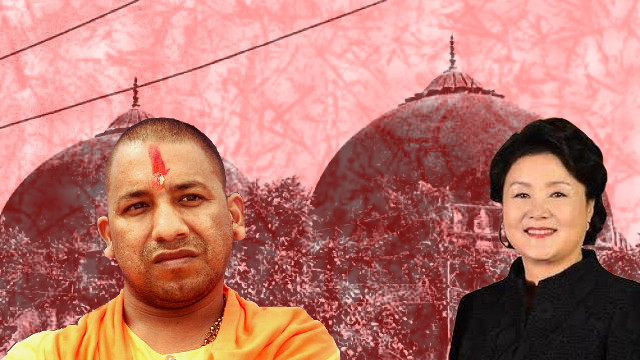 Kim Jung-sook, the first lady of South Korea (US-occupied Korea) is now visiting Ayodhya for the Diwali celebration at the banks of the Saryu river along with the controversial Hindutva hate monger-turned-chief minister of the state, Yogi Adityanath, where the latter will unveil the tallest statue of Hindu deity Rama to instigate the Ram Temple-Babri Masjid diatribe before the 2019 general election. This visit by a first lady of an American neo-colony shows how the US ruling class and the fascist Donald Trump regime are involved in the Hindutva fascist camp’s Ram Temple campaign and how these imperialist powers are helping the BJP, indirectly, through their puppets, to stir communal trouble and widen the fissure to disunite the working class.

Why Kim Jung-sook is visiting a controversial town, which is used as a political weapon by the BJP and other affiliates of the RSS to rake-up anti-Muslim pogroms in the country? What’s the interest of Kim Jung-sook, whose husband is a rubber stamp head-of-the-state of an American neo-colony in a place like Ayodhya, where the issue of a mosque’s demolition divided the common Indians into communal lines and caused severe bloodbaths throughout the country? What’s so spiritual about a political programme organised by the Uttar Pradesh chief minister, who has used his religious position to consolidate his political fortune all his life?

The Diwali celebration by Yogi Adityanath and his sycophants at the banks of the Saryu river isn’t merely a religious function, rather it’s a very cleverly planned political programme that the Hindutva fascist Uttar Pradesh chief minister is going to use to drive home his utmost communal agenda over Ayodhya and to polarise the vulnerable, politically backward Hindu votes before the 2019 general election using the Ram Temple rhetoric. Starting with the change of the name of Faizabad, connected with the legendary Umrao Jaan, in his spree of renaming all cities of Uttar Pradesh that bears any Muslim-sounding name, Yogi Adityanath is quite cunningly playing his communal cards as elections knock the door.

It wouldn’t have been impossible for Kim Jung-sook to check out and know about the programme she is going to visit and why Yogi Adityanath is the most controversial chief minister in India with a long and dark history. The South Korean intelligence, which works under the CIA, must have checked the political implications of the programme that the first lady was supposed to attend, they must have got the message clear that the occasion will be used to fuel divisive politics in India and the participation of the first lady in the event will deliver a wrong message to the world about Seoul.

Still, when Kim Jung-sook is attending the programme, it means the South Korean intelligence and the CIA are okay with Yogi Adityanath’s programme, which also involves erecting the tallest statue of Hindu deity Rama at Ayodhya and his plan to divulge the Uttar Pradesh government’s future course of action over Ayodhya dispute. This means the ruling classes of the US and South Korea are endorsing the Ram Temple campaign and they will fund this attempt to sabotage the unity of the common people of India to help the BJP remain in power at any cost.

The CIA has a stringent process in place to filter the events where the American statesmen or those of the American colonies and neo-colonies or countries where the US has strategic interests or military deployment, visit. In case they visit any event that can cause further problems for the US or its allies, then the CIA red flags the participants and stops them from attending any such programme. When the CIA’s World Factbook describes Hindutva fascist VHP and Bajrang Dal as militant organisations, then allowing the South Korean first lady to attend a programme that’s organised by a man with close ties with the VHP and Bajrang Dal must not have gone unnoticed by the CIA officers or their South Korean lackeys.

As they have allowed Kim Jung-sook to visit Ayodhya at a time when the case over Babri Masjid demolition is subjudice in the apex court, when the country’s political atmosphere is heated with the overused fuel of Ram Temple by the BJP, when the RSS and its affiliates are openly threatening to disobey any adverse verdict by the court and the Modi regime is trying to bring an anti-secular, anti-Constitution and anti-democratic law to build the temple at the site of the demolished mosque, then they certainly endorsed the event and its political repercussions.

What makes the South Korean government send the first lady to attend a controversial programme in India? What’s the interest of Seoul or Washington DC in not stopping Kim Jung-sook from visiting the very town where the Hindutva fascist thugs are going to stir up new waves of a communal tirade over the three-decade-old Ram Temple issue? If the economic interests of the Korean firms (virtually owned by the big American, Japanese and European banks and big corporate houses) in India are reviewed correctly then the reason will be clearly understood.

Under the rule of Narendra Modi, the big foreign corporations and banks have got unbridled access to plunder the natural and mineral resources, and labour of the working class. Although the previous governments, especially the BJP-led NDA government of Atal Bihari Vajpayee and the UPA I and II governments under Dr Manmohan Singh, the World Bank’s chosen man, allowed corporate loot to intensify in India and the latter also began a large-scale military operation to evict the tribal people from their land, forests and rivers, the amount of leeway and flexibility in exploitation of India that the Modi regime has provided these foreign banks and corporations is incomparable with anything of the past.

With South Korea, there is a special thing in Uttar Pradesh. Citing some old historical data about one of the princesses of Ayodhya marrying a prince of united Korea some 2000 years ago, a South Korean city government signed a memorandum of understanding (MoU) with the Uttar Pradesh government of Yogi Adityanath in December 2017. There was a talk about building Ayodhya as a sister city of a South Korean city and there, the cunning RSS leadership saw an opportunity to get international focus on the ‘Ram angle’ of the Ayodhya city and pushed Yogi Adityanath for more engagement with South Korean corporations.

During the Uttar Pradesh Investor Summit, a South Korean firm named Worldbestech promised to invest Rs 90,000 crore in the state. It made a headline news and Yogi Adityanath-led BJP’s government flaunted that incident as international corporate and finance capital’s faith in its ability to deliver an ‘investor-friendly governance’. Later, it was found that the company itself is worth Rs 13 crore, which caused a lot of embarrassment to the Yogi Adityanath-led government because it earlier declared the promised sum with much doldrum and considered it as a crucial part of the total Rs 400,000 crore investment promise made during the summit. It was doubted that the Yogi government was trying to help this small foreign corporation to get easy loan from some public sector banks and then allow them to invest the money in Uttar Pradesh, which would later increase the burden of non-performing assets or bad loans on the ailing public sector banks, affecting the people’s money in turn.

A few months later, while wooing South Korean electronics giant Samsung and other companies to invest in Uttar Pradesh, Yogi Adityanath kept singing the folklores of Ayodhya’s princess marrying the prince of Korea and kept focusing on Ayodhya, the political battlefield where the Hindutva fascist camp fights against the secular values of Indian Constitution.  In September 2018, in his bid to woo more foreign capital from South Korea, Yogi Adityanath’s government organised a South Korean investors’ summit named ‘Korean Caravan’, where the South Korean corporations were lured with the fact that labour is extremely ‘cheap’ in Uttar Pradesh and the working class is disorganised through communal politics in such a way that the big corporations won’t have to face any resistance from the working class, giving them a license to exploit the workers without any limit.

The visit of Kim Jung-sook is a part of this grand scheme of wooing more capital from South Korea and other such ‘rich’ American neo-colonies to Uttar Pradesh and help the corporate houses exploit the labour of the state, while the people will be deceived with building of statues or by organising grand Diwali celebration using money from public exchequer at a time when the public health care system is collapsing in the state, diesel price hike and rising debts are hurting farmers, uncleared sugarcane dues are a matter of worry for sugarcane farmers, non-availability of teachers in government schools is affecting the future of poor students.

By being a part of the Ayodhya Diwali celebration, Kim Jung-sook, the South Korean first lady, is inaugurating a severe exploitation regime on the working class of the state as well as endorsing the communal fascist agenda of the Yogi Adityanath regime to divide the people on the basis of religion by playing the Ayodhya Ram Temple card just before the 2019 election. Her participation also shows that the big corporate capital is behind the Ram Temple agitation of the Yogi and Modi regimes and even the CIA and other American government agencies will aid the RSS’ attempt to flare up communal trouble in India so that their interests of loot and plunder of India’s resources, labour and money are protected under the rule of the BJP.