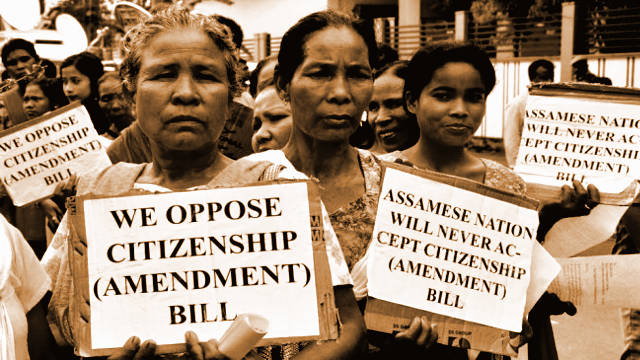 The political atmosphere of Assam is blistering now amidst this winter as the BJP is unrelenting to implement the Citizenship (Amendment) Bill, 2016, with brute force. The controversial bill has been in the limelight since the BJP announced about it after sweeping the 2016 Assembly Election in Assam. This time, not merely Assam, but the entire North East is disquiet over this bill, as the regional ethnic-chauvinist outfits accuse will cause a severe threat to the demography of the region.

Called a brainchild of Narendra Modi, and promoted by Chief Minister Sarbananda Sonowal and his trusted lieutenant Himanta Biswa Sarma, the Citizenship (Amendment) Bill, 2016, grants citizenship rights exclusively to non-Muslims from neighbouring Afghanistan, Bangladesh and Pakistan, who have fled from those countries due to religious persecution and have been living in India for a period of not less than six years, with a cut-off date of December 2014. As a very minuscule percentage of oppressed Buddhists, Christians, Sikhs, Jains or Parsis had fled from these countries, it’s largely the Hindus that this bill plans to grant citizenship.

Due to its official exclusion of Muslims from the list of beneficiaries, this bill violates Article 14 of the Indian Constitution that guarantees equality and bars the state from discriminating between the people, citizens and non-citizens alike. This unequal, discriminatory and absolutely communal bill goes against the spirit of the Indian Constitution and secular values, and therefore, it can’t stand a hard trial in the apex court if it ever goes to a Constitution Bench.

Political and social outfits that represent the rights of the indigenous people have vehemently criticised the bill. Even the BJP’s allies in the North East Democratic Alliance (NEDA), which is ruling most of the states in North East’s seven sister states, have opposed the bill. Many organisations of Manipur, Meghalaya, Nagaland and Tripura have opposed the bill and its repercussions on the demography of the region. The BJP is facing a massive backlash in these states where it recently made inroads.

Not bothered by the public outrage against the Modi regime’s decision to implement the utmost communal Citizenship (Amendment) Bill, 2016, the BJP and the RSS are busy to ensure that this bill helps them wean a large number of Bengali Hindus in Assam, Tripura and West Bengal immediately. The BJP and the RSS, through a plethora of Hindutva fascist outfits, have been trying to woo the Bengali Dalits (Namasudras) and backward caste Hindus, who have immigrated from Bangladesh but didn’t get their citizenship so far, to its camp so that they can be its pawns against the Bengali Muslims.

It’s not an egregious error of the BJP to stay adamant over the bill despite facing a severe opposition in Assam, one of the two states where it won a majority on its own; rather, it’s a carefully planned part of a murky scheme of the saffron camp to drive a communal wedge between the people and promote fratricidal violence in the whole region of North East to build up a favourable environment for the Hindutva fascist ideology to gain a stronghold and carry out extensive proselytising campaigns to raise an army of hardcore bigots who will serve the RSS’ agenda of a Hindu  Rashtra.

Since coming to power at centre and at the state, while on one hand, the BJP tightened the noose of the anti-people NRC around the neck of the Bengali-speaking people, carefully keeping the Hindi-speaking elites and upper-middle class at safe distance, on the other hand, dangling the anti-Constitution Citizenship (Amendment) Bill, 2016, as a bait, it tried to lure the Bengali Hindus for their support.

The final draft of the NRC published in July 2018 excluded four million people out of 32.9 million who appeared in it. A large number of these people are Bengali-speaking Hindus and Muslims on whom uncertainty looms large like the sword of Damocles. Capitalising on the fear and insecurity that reigns amidst the Bengali Hindus, the BJP is trying to rake up support for the Citizenship (Amendment) Bill, 2016, by hoodwinking them with a better and secure future. People like Himanta Biswa Sarma are promising absolutely no harm to the Bengali Hindus, turning the spearhead of government’s attacks against the Assamese and Bengali Muslims only.

For the Assamese ethnic-chauvinist militants like AASU, AGP and a host of such organisations, the BJP’s communal division of ‘illegal immigrants’ is not acceptable. They are opposing the idea of communal bias in determining ‘illegal immigrants’, not out of their sudden-found love for Muslims, but because the exclusion of Bengali Hindus from the category of the ‘illegal immigrants’ will pose as a threat to their own dominant position in the society of Assam.

As per these ethnic-chauvinist forces, immigrants, irrespective of their religion, must be stripped off their rights and turned into stateless people, detained and then deported. Thus, they aren’t struggling against BJP or RSS’ communal agenda, which they didn’t oppose in the last three decades when they remained public or private bedpartners of the Hindutva fascist camp and allowed it to spread the venom of communalism in Assam, rather they are only opposing a part of BJP’s communalism that hurts their own ethnic domination over Assam.

Both the Hindutva fascist camp and the Assamese ethnic-chauvinists know that it’s absolutely impossible to deport four million people who didn’t feature in the final NRC draft. Even if we assume that two million people get successfully enrolled in the NRC by following the erratic and inconsistent reapply and appealing process, which ended on 31 December 2018, two million people will still be left out for the government to prey upon.

It will not be possible for the government to detain them somewhere without violating the UNHRC standards. Though detention centres are made within regular jails to captivate the so-called ‘illegal immigrants’, it’s unlikely that two million people can be locked in them. Bangladesh has already declined to accept the deported people as its citizens and thus, a large section of these people will be in a completely chaotic state without citizenship and no policy to deal with them. What will the Indian rulers do with them? Strip them of their citizenship rights, voting rights and turn them into vulnerable people who can be exploited and oppressed by anyone?

In such a situation there will be a large pool of stateless poor people, mostly the Bengali Hindus and Muslims, who will be left with no option but to sell their labour for cheap to the comprador capitalists and big foreign corporations to survive on bare necessities. As these people will not be in a position to barter any better deal for themselves, thus, they will be fully exploited by the owner of the capital. This is a scenario that fits the agenda of both Hindutva fascist BJP and the right-wing Assamese chauvinism that tries to cast one section of the poor against another.

With the BJP’s Citizenship (Amendment) Bill, 2016, a section of the Bengali Hindus may escape the claws of the draconian NRC, however, the Bengali Muslims will have no rescue and they will have to suffer the ordeal that’s prepared for them by the majoritarian fascist bloc. This suffering by the Muslims in Assam will be used by the RSS as propaganda to appease the bloodlust of its feral bigoted upper-caste elite Hindu supporters in the Hindi heartland.

To rescue millions of poor from such a nightmare, the progressive, democratic and anti-fascist forces in Assam must intensify their struggle against Hindutva fascists and the Assamese ethnic-chauvinist militants, both of whom are dividing the people into antagonistic sectarian camps and forcing them into an abyss of fratricide and severe violence.

It’s important to clearly point out that both NRC and the Citizenship (Amendment) Bill, 2016, are enemies of the people of Assam and they both work in tandem to divide the people into communal and ethnic lines to ensure they remain locked in utmost violence and bloodshed for decades to come. It must not be opposed, but together with the NRC, Hindutva fascism, Assamese ethnic-chauvinism, this Citizenship (Amendment) Bill, 2016, must be thrown in the garbage bin of history.