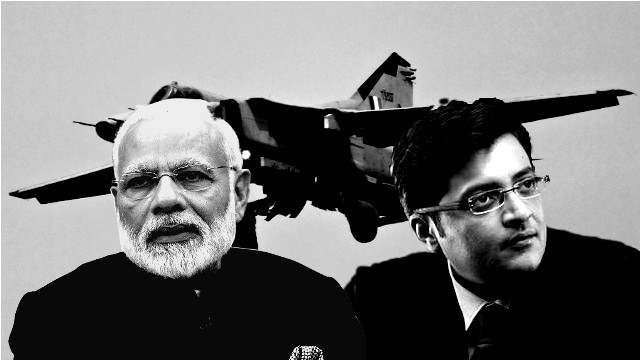 Recently India-Pakistan relations towered to the peak of a war-like situation, thanks to the much-anticipated “surgical strike 2.0” by the Modi regime followed by dog fight between Indian and Pakistani fighter jets, captivity of Indian Air Force’s Wing Commander Abhinandan Varthaman, and the subsequent ceasefire violation by India and Pakistan at the Line of Control (LoC) in Jammu & Kashmir, which resulted into intensive shelling and death of civilians at both side.

This tension is acting as BJP’s boon in the election campaign. This tension is actually Prime Minister Narendra Modi’s masterstroke to polarise upper-caste Hindu elite and urban middle class voters in his favour by intensifying the xenophobia over Pakistan and the purported military victory that he is able to deliver to India as a helmsman.

The war tension is used to camouflage issues like rising unemployment, a severe farm crisis, a planned eviction of tribal people from forests, increasing violence and discrimination against minority communities, Dalits and other Bahujans, the unapologetic corporate appeasement done by the BJP at central and state levels, immense corruption and nepotism in the banking front, and an unbridled race towards divesting government’s shares in public sector units to benefit the corporate donors of the BJP.

Any question asked on these issues, demanding employment, dignity of labour, respect for the toiling masses, better and equal pension to ex-servicemen, higher interests on small savings, declining number of permanent or organised-sector jobs, increase in contractual labour, disinvestment, or cuts in social-welfare programmes like the MNREGA and in higher education are considered as “anti-India” activity. Following the footsteps of former prime minister Indira Gandhi, Modi equated himself with the country and called critics of his “surgical strike 2.0” claim “anti-India”, saying that their doubt has helped Pakistan.

The Modi regime’s uncritical servile media houses have been lambasting anyone who raised questions over the success of the “surgical strike 2.0” citing lack of evidence or international media’s coverage of the issue. The BJP has been attacking those who have dared to question the warmonger Modi regime and its immature adventurism by jeopardising India’s national security to earn political brownies in the forthcoming Lok Sabha election. The cliched “anti-national” label is pasted freely on anyone who dared to show dissent and asked some harsh questions to the Modi regime.

Ever since the militant attack on a CRPF convoy in insurgency-hit Jammu & Kashmir’s Pulwama district, which killed 45 paramilitary soldiers, raising questions about the government’s failure, in providing security to the troops and the utmost failure of its brutal Kashmir policy, became blasphemous in Indian mainstream politics and media discourse.

Without any preliminary investigation, without asking the top policymakers and security heads of the government to show accountability for the mishap, the BJP and the entire Hindutva fascist camp capitalised on the incident and turned it into a rallying point to build up a country-wide jingoistic fervour in favour of a war with Pakistan.

The talk of a cross-border surgical strike targeting the terrorist camps within Pakistan-occupied Kashmir became the war cry of the nation and for days the possibility of a strike was discussed in such a fashion that even the terrorists hiding in such bases got ample amount of time to retreat into the hinterlands of Pakistan.

It was ridiculous to expect the Pakistani intelligence agency — ISI —  and the omnipotent military establishment, of which Pakistani Prime Minister Imran Khan is merely a puppet, to not take any preventive measures to protect the Salafist terrorists they have roosted in the backyard when such war rhetoric will flow in neighbouring foe’s courtyard.

It’s unlikely that the Jaish-e-Mohammad terrorists will be staying together in facilities that are easily recognisable as their shelter. Rather, the ISI and the Pakistani Army would have shifted them immediately far away from the reach of Indian Air Force or army, fearing a reprisal.

Even when the government’s spokesperson limited the claims within ambiguous terms like dropping 1000 kg payload in Pakistan’s Khyber Pakhtunkhwa province’s Balakote targeting a Jaish-e-Mohammad facility,  and clarified that the Indian Air Force neither targeted Pakistani military or civilian facilities to ensure it doesn’t sound like declaring a war, the corporate media houses, infamous due to their lap-dancing for the Modi regime’s pleasure, kept claiming that more than 300 terrorists were killed, including the Jaish-e-Mohammad founder Masood Azhar’s brother-in-law.

Despite the international media houses like the BBC, Al-Jazeera, etc, showing that the Indian Air Force’s attack only targetted fields, hilltops and few pine trees, injuring one civilian, the Hindutva fascist camp’s shameless lapdog media houses kept boasting over a great success and called Modi a national hero for taking such a decisive  standpoint. They didn’t dare to question the failure of the Modi regime in providing security to its CRPF men, or why so much blood is spilt on the streets of Kashmir under Modi’s direct rule, rather they questioned the opposition forces that raised doubts over the much-hyped PR exercise over the Indian Air Force’s “surgical strike 2.0” in Pakistani territory.

Soon Pakistan asserted itself by violating ceasefire at the LoC and its fighter F-16 jets targeted Indian military installations, only to meet heavy dogfight with the MiG 21 Bison planes. One F-16 was reportedly shot down by a MiG 21 Bison, which was also shot down by Pakistani air defence, resulting into the captivity of Indian pilot Abhinandan Varthaman.

When the Pakistani prime minister used the scenario to reach a high moral ground by declaring that the wing commander will be released, and won diplomatic kudos, Modi was found addressing his party men regarding the forthcoming general election. Rather than acknowledging the worsening situation, Modi kept reiterating war rhetoric about punishing Pakistan through tough measures.

The world was surprised for the first time to find a mature and anti-war response from a prime minister who is a puppet of his country’s arch-reactionary military establishment, while the prime minister of the so-called “largest democracy” that has kept the military out of powerplay since its inception, became a warmonger and kept on ranting to downgrade the status of India in the world’s arena.

The moral high ground that India had, being a victim of Pakistan’s proxy war through the Salafist outfits like the Jaish-e-Mohammad and Lashkar-e-Taiba, was lost due to India’s adamant behaviour and reluctance to officially scale down the tension. Much of the television showbiz anchors, who call themselves journalists, are to be blamed for this escalation and India’s unnecessary muscle-flexing.

Each of the toady tv show anchors like Arnab Goswami, Sudheer Chaudhary, etc, started advocating a full-scale war with Pakistan, which helped to invigorate the jingoism embedded within the upper-caste Hindu elites and urban middle class. Social media warmongering by the BJP members, the WhatsApp blitzkrieg over Modi’s success in wiping out terrorism through the “surgical strike 2.0” was done in such a magnanimous proportion that there is no scope left to ask questions regarding the outcome of the first one in preventing attacks on military forces, BJP’s blaming Jawaharlal Nehru — India’s first prime minister — for the Pulwama attack, logic behind crediting Modi for the air strikes purportedly done by the Indian Air Force, and the increasing tension at the LoC, which resulted into death of civilians.

The BJP’s intention to turn the airstrike into vote generator, as BS Yeddyurappa, the corrupt BJP leader of Karnataka has dared to explicitly state, or its exploitation of people’s sentiment, especially the jingoism manufactured by the likes of Arnab Goswami, Rahul Shivshankar, Sudheer Chaudhary, Anjana Kashyap, etc, to build up a support wave for the Modi regime, as a Gujarat BJP leader shamelessly declared as the party’s strategy, clear any ambiguity over the political mileage that it will try to milk from the Pulwama incident and the so-called “surgical strike 2.0”.

While the BJP and the Modi regime will derive political mileage by exploiting the jingoistic fervour that’s at its peak among the urban upper-caste Hindu elites and middle class, sweeping its disastrous economic policy and communal agenda beneath the carpet to hoodwink the poor, the situation at the border areas of conflict-torn Jammu & Kashmir and Punjab will turn worse, inflicting casualties of military and civilians. The blood of the common people will be shed to fuel the locomotive of the jaundiced version of nationalism that the Sangh propagates.

If the BJP and these warmonger lapdog media houses of the Modi regime become successful in achieving success in their war propaganda and the BJP sweeps the forthcoming general election, then it will be a catastrophe for a country like India. A party whose leaders strongly believe that cow urine can cure cancer and cows give oxygen will push the country to the verge of a mindless nuclear conflict, which has the possibility of killing 21 million people instantly and create a global disaster for mankind by destroying the ozone layer.

War and ultra-nationalist rhetoric are useful methods for fascists and their propaganda machinery to dupe people, distract them from real and burning issues, and consolidate power. However, in the 21st century, when imperialist superpowers like the US even fear to use nuclear or such dangerous weapons on their enemies in Asia-Africa-Latin America, talking about nuclear war and using rhetoric to instigate voters while escalating a prevailing tension in a very volatile geopolitical context will jeopardise a slogged economy like India and result into a massive mayhem.

If Modi and his coterie, including the highly-paid notorious tv news anchors, continue to vouch for a military solution and attack those who oppose the idea of war, then the democratic, anti-fascist and progressive forces must hasten the task to build up a massive people’s movement for democracy, peace and employment. Such a movement is a dire necessity of the country to oust the real “anti-national” Modi regime and the big comprador capitalists who promote this regime or support it for obvious reasons like profiteering.

For a peaceful, harmonious, democratic, equal and just India of the future, the democratic, anti-fascist and progressive forces must unite against the notorious corporate media, its lackeys, the Hindutva fascist camp and the big corporations, foreign and domestic that are supporting the Modi regime and its war cry against Pakistan. India can’t afford to live in a state of war and sacrifice lives of its soldiers to satiate blood lust of the hyper-nationalist citizens or to fulfil the notorious project of the Hindutva fascists. It’s time not to merely say no to war, but to say no to warmongers and their policies that lead to war and violence.