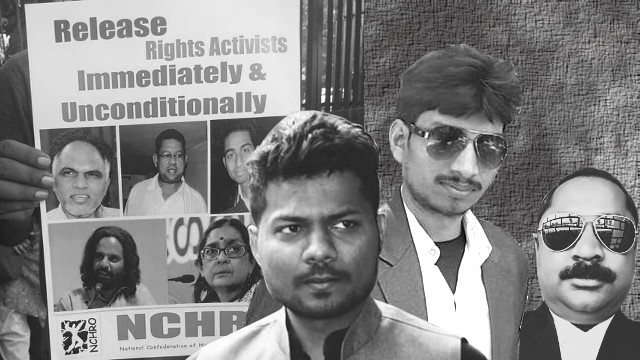 One year passed since Rona Wilson, Sudhir Dhawale, Surendra Gadling, Mahesh Raut and Shoma Sen were arrested under the draconian Unlawful Activities (Prevention) Act (UAPA), by the Pune Police for allegedly having Maoist links. The arrests took place soon after the Rashtriya Swayamsevak Sangh (RSS) — parental body and the ideological powerhouse of the ruling Bharatiya Janata Party (BJP) — endorsed the concept of “Urban Naxal” as formulated by flop semi-porn filmmaker and Hindutva fascist rabble-rouser Vivek Agnihotri. These five are the first set of critics and rights activists accused of being “Urban Naxals” and blamed for instigating the Bhima Koregaon violence that rocked Maharashtra in January 2018, while the real culprits of the incident are roaming scot-free due to their RSS links. A purported letter from one “Comrade M” was allegedly recovered from Wilson, which the Pune Police claimed has a detailed Maoist plan of assassinating Prime Minister Narendra Modi.

Wilson is a founder member of the Committee for the Release of Political Prisoners (CRPP) and its public relations head; Dhawale is a Dalit-rights activist; Gadling is a progressive lawyer; Raut is an activist who works on displacement issues; Shoma Sen is a university professor in Maharashtra. While Wilson was arrested from South Delhi, the rest were arrested from Maharashtra. Their trial is still on under the UAPA and they weren’t the last to be arrested.

Soon after the arrest of these five under framed charges, the Pune Police arrested P Varavara Rao, Gautam Navlakha, Sudha Bhardwaj, Arun Ferreira and Vernon Gonsalves for their suspected Maoist link in August 2018. A concerted series of raids were conducted at eight locations in Maharashtra, Goa, Telangana, Delhi and Jharkhand simultaneously. The “Urban Naxal” and “Tukde Tukde Gang” narrative were made focal themes of political discourse by Modi’s toady media and these civil rights activists and their activities were shamed as “terrorism” by the Hindutva propaganda machinery. Rao is a revolutionary Telugu poet, Navlakha is a prominent human rights activist, Bhardwaj has been a lawyer and human rights activist, Ferreira is a civil rights activist who was earlier arrested on similar charges, and Gonsalves is also a rights activist.

Now that the Modi regime has returned to power and the Maharashtra government is keen to persecute all forces that dare to resist the Hindutva fascist ideology or question the corporate loot and plunder unleashed in India under Modi’s aegis, it’s unlikely that the state or the central government will give up the politically crucial cases using which they can spread xenophobia and portray the prime minister as a victim. The narrative set by the ruling classes will need these activists as scapegoats as by persecuting them the BJP and the RSS want to instil fear among human rights activists, lawyers and other critics of the government, especially, within the academic world. The BJP and the RSS are harping on this fear factor in their endeavour to turn India into a totalitarian police state and change its Constitution to this effect.

As these activists are slapped with the draconian UAPA, it’s unlikely that they will get bail anytime soon. Their persecution and incarceration continue under cooked-up charges, while Hindutva terror accused like Sadhvi Pragya Thakur is elected to the Lok Sabha and Aseemanand is released by the National Investigation Agency (NIA) court. The NIA is accused of diluting charges against the Hindutva terror accused following the directives of the Modi regime. With a serial human right abuser and murder accused Amit Shah taking up the Union government’s home minister’s charge, more ironies will be revealed in the days to come. At one glance, it’s time for the Hindutva terrorists to merry around and the people’s activists to suffer the persecution.

A disarrayed opposition, which is further upset over its electoral setback to Modi’ Hindutva bandwagon, is unable to or is disinterested in — as one may accuse — raising the issue and mobilising people’s movement for the release of these activists. The passivity and the meek response of the tangled opposition have bolstered the courage of the ruling BJP to unleash more terror on the opponents and critics of the Modi regime or any BJP government in India. The Modi regime and its accomplices are targeting independent activists, journalists, lawyers, Marxists and other pro-democratic forces throughout the country using the state power.

Recently, Prashant Kanojia, a former journalist of TheWire.in, was arrested from Delhi by the Uttar Pradesh Police for posting a sarcastic post regarding Yogi Adityanath, the state’s chief minister. The arrest of Kanojia was followed by registration of a case against The Quint owner Raghav Bahl by the Enforcement Directorate (ED). The ED accused him of money laundering and Bahl called the charges framed up. These accusations, arrests, filing of cases have caused upheaval among the independent journalists and critics of the government as they can clearly see the state targeting their right to free speech. While these cases came to the forefront as they happened in New Delhi, the cases of police atrocities against independent activists in the hinterland of India are not even making the news, except for all the wrong reasons.

The Bihar Police arrested independent Marxist journalist Rupesh Kumar Singh, lawyer and activist Mithilesh Kumar Singh and their driver Mohammad Kalam, accusing them of ferrying explosives for the Maoists in Jharkhand and Bihar. The local Hindi media published the police story as Gospel’s truth and didn’t question the narrative at all, knowing well that the police is infamous for planting such stories and framing innocents to score political brownies. The accusation levelled against the duo comes from their regular criticism against the BJP’s anti-national politics, which is putting corporate interest above people’s interest. The Marxist-leaning of these two and their driver’s Muslim identity helped the Bihar Police to frame charges against them easily.

The rise of Modi and the trampling of the democratic values, ethos and the minimal autonomy of all institutions prove that the Indian state is undergoing an undeclared emergency. With the Modi regime opening the flood gate of its much-hyped big bang reforms, which will allow unbridled loot and plunder of Indian mineral resources, land, water, environment and exploitation of Indian labour by big corporations, more repression will be laden on the people, as resistance to corporate aggression will surely overtake the intensity of Hindutva polarisation. Rather than launching an all-out attack against the common people, the Modi regime will cunningly arrest and persecute the critical voices that raise people’s issues, the leaders who try to organise the masses and the journalists, editors, etc, who still try to keep their spine straight amid a general environment of servility. To stop this cycle of repression and intimidation, and to foster a democratic struggle against the Hindutva fascist regime, the progressive, democratic and anti-fascist forces must come together and unite under a common programme.