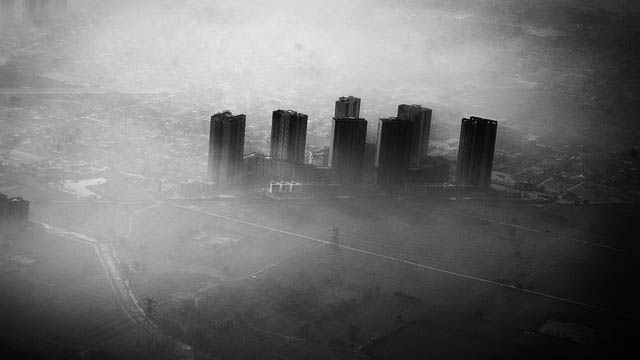 Indian capital city New Delhi and its neighbouring National Capital Region (NCR) turned into a virtual gas chamber in the first week of November as air pollution caused due by smog from burning of crop stubble by farmers in neighbouring Punjab and Haryana engulfed the city, with Air Quality Index (AQI) reaching an alarming 999 on Sunday, 3 November. This AQI is hitherto highest and severest for Delhi as well as India.

Weather experts were stunned that the light rain that happened on Saturday, 2 November, and Sunday, didn’t help in curbing the pollution. Rather, light rain helped the pollutants to condense due to rising humidity. It created far more problems and even dropped visibility below 500 metres, causing massive disruption in air traffic operations in Delhi’s Indira Gandhi International Airport.

Hospitals in Delhi reported a surge in the number of patients coming with breathing issues or other issues related to pollution. As air pollution is Group 1 carcinogen, there is a high possibility of it causing a large number of lung cancer cases among non-smoker adults in Delhi NCR. Staying out for an hour in Delhi’s toxic air is equal to smoking more than 50 cigarettes. The Delhi government has ordered schools to remain closed until 5 November, while all construction activities and diesel generator usage are also stopped.

This smog pollution in the month of November, after the north Indian Hindu festival of Diwali, is now an annual recurring affair. Though farmers of neighbouring Haryana and Punjab have been burning the stubble in their land before sowing the winter crops for years, as clearing them manually or using machines would incur huge costs, the rapid growth of urbanisation, massive destruction of environment, especially deforestation in Delhi NCR have worsened the situation lately as there is no buffer zone between the smoke and the city.

In the last week of October and the beginning of November 2019, more than 22,000 incidents of stubble burning were noticed in Punjab, while 4,200 incidents were noticed in Haryana. Prime Minister Narendra Modi’s regime promised 63,000 machines to automatically uproot the stubbles from the farmers’ fields in Haryana and Punjab in 2017 itself, which never materialised. According to Delhi’s Deputy Chief Minister Manish Sisodiya, the plan would take 50 to 60 years to be fully implemented and there is no respite in sight for the people of Delhi and NCR.

According to a study called Air Quality Life Index by the Energy Policy Institute of the University of Chicago, the population of Indo-Gangetic plain area will have a shortened life by seven years due to pollution. In the case of Delhi, the National Clean Air Programme (NCAP) must be implemented urgently. The NCAP targets to reduce the PM2.5 and PM10 levels by 20-30% in a period of a few years. A reduction in the PM2.5 and PM10 in the air to that extent will somehow help the people to breathe and reduce the chances of lung cancer or other disorders.

Though politically Delhi is a very important city for the Indian ruling classes, neither Modi’s Bharatiya Janata Party (BJP) shows any interest in taking any affirmative actions to curb this annual menace, nor it helps the city’s government led by the Aam Aadmi Party (AAP) led by Chief Minister Arvind Kejriwal to combat it. Sisodia accused that the Union Environment Minister Prakash Javadekar postponed his meetings with the state environment ministers on the issue of smog pollution on 12 September, 17 October and 19 October. Javadekar even didn’t respond affirmatively to his BJP colleague and Haryana Chief Minister Manohar Lal Khattar’s request for an urgent meeting of chief ministers of Delhi, Haryana, Punjab, Rajasthan and Uttar Pradesh.

While Javadekar shows his nonchalant attitude, his boss Modi, who uttered gibberish rhetoric at the United Nations’ Climate Action Summit 2019, fled to Bangkok, Thailand, under the garb of attending a South Asian summit to remain aloof from the worsening condition. The city BJP, which labels Kejriwal’s AAP government as anti-Hindu for its ban on firecracker bursting during Diwali and encourages the majority Hindu community of Delhi to burst them for the sake of religion, is now accusing the AAP as the harbinger of pollution.

Targeting the 2020 Delhi assembly election, the BJP is trying to score brownies by peddling obnoxious propaganda on smog pollution, without admitting the failure of its own governments at the centre and in Haryana in curbing the menace. The state BJP leaders are distributing masks to children and others, after distributing free crackers last year. Their campaigning has more to do with the AAP than the issue of pollution in Delhi. The AAP is also unable to develop a sustainable strategy in coordination with other states to combat the surge of PM2.5 and PM10 in the air caused by the smog from stubble burning. It’s resorting to its old Odd & Even formula to reduce cars plying the street, even though 88% of vehicles that ply the streets of Delhi are two-wheelers.

As the AQI reached an alarming level, the poor and marginalised people, who can’t even afford to live in decent accommodation, leave alone affording an air purifier, will remain vulnerable to lung cancer and other bronchial disorders. Millions of people’s lives are at stake, and to prevent a catastrophe happening, there is an urgent need for coordinated action by the stakeholders.

The ruling parties like the AAP or the BJP can’t play blame games to escape the responsibility. Modi and his cohorts simply can’t escape the gas chamber and enjoy a pleasant vacation in Thailand or elsewhere, leaving the people of Delhi at the brink of death. There is an urgent requirement to look into the unfinished tasks to combat the menace of pollution and there must be a time-bound, sustainable solution to this.

The NCAP must be implemented immediately along with that, the Modi regime must help the governments of Haryana and Punjab with the machinations required to uproot the stubble from the field without charges so that they can use the technology rather than resorting to burning the fields.

There is also a need to stop the corporate annexation of farmlands and forests throughout the NCR and the country to stop deforestation and thoughtless expansion of urban centres. A ban on construction work and emphasis on rapid, large-scale forestation drives in a planned phase can help to reduce the impact of pollution in Delhi and the NCR. There is a constant demand for the implementation of the NCAP, however, before that, it’s necessary to form a task force that can help and cajole the farmers of Haryana and Punjab to change their practice of burning stubble for preparing their land for winter cultivation.

The fact is that air pollution in Delhi NCR can’t be combatted within the present system — the utmost polluted one — that serves the interest of those classes that exploit the environment to profiteer. No measures by the present governments, irrespective of which party is at the helm, will resolve the pernicious issue. Air pollution in Delhi, with high PM2.5 and PM10 content, will keep killing people at a large scale until a people’s democratic government isn’t formed by the coalition of the working class, the peasantry and the toiling masses.

As only such a government can actually overthrow the present semi-feudal production relations in Haryana and Punjab, helping the poor and marginalised farmers to unleash their potential, the incidents of stubble burning can be checked and also the corporate aggression on the environment, which is the biggest threat to the security of the future generations, can be thwarted. This can be the only way through which the common people can have a long-term, sustainable and effective respite from the recurring issue of air pollution in Delhi. Except for this solution, the rest all will remain confined within tall talks and zero actions, as one can experience from the AAP and the BJP’s locking of horns on Delhi’s toxic and fatal pollution.