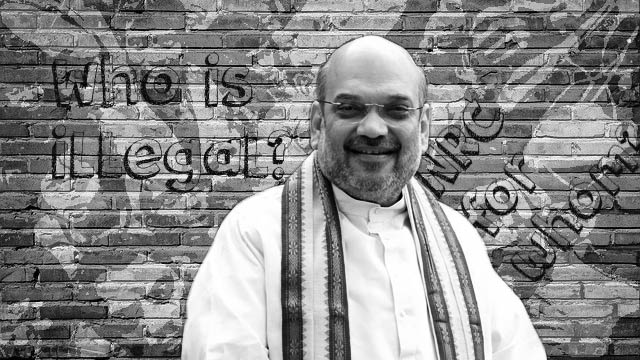 For years, the Rashtriya Swayamsevak Sangh (RSS), its parliamentary wing, the Bharatiya Janata Party (BJP), and the Indian state machinery, with the support of its toady press, have been claiming that India is facing a massive threat of illegal Bangladeshi infiltrators, which gave Prime Minister Narendra Modi’s regime the impetus to propose a nationwide National Register of Citizens (NRC) following the provisions of Citizenship (Amendment) Act, 2003, and the Assam model that excluded 1.9m people out of 33.02m who applied, resulting into a nationwide mass movement against its decisions. With the massive movements against the Citizenship (Amendment) Act, 2019 and the NRC, the propaganda over the purported threat of illegal Bangladeshi infiltrators has reached a new peak.

What’s the basis of claiming that India has hundreds of millions of illegal Bangladeshi infiltrators? What’s the data source? The RSS-BJP anticipated that millions of Bengali and Assamese Muslims of Assam will not feature in the NRC, which would support the xenophobia over illegal Bangladeshi infiltrators and justify a nationwide NRC. However, when it was found that 1.2m of 1.9m people excluded from the NRC are Hindus, and only 700,000 are Muslims, they suffered a setback. It forced the BJP to hoodwink the Bengali Hindus, its core vote bank in the state, by claiming that the NRC will be scrapped as it’s faulty. Though Modi’s lieutenant Home Minister Amit Shah claimed in the Parliament that the government is discarding the NRC of Assam, done under the Supreme Court’s observation according to the Assam Accord, 1985, with an expense of Rs 15 billion, there has been no such government notification issued so far, which means the NRC of Assam is still valid and those 1.9m people are still stateless.

Now, when there is a talk about a nationwide NRC by Shah, which Modi later refused, then there must be also an estimated number of illegal Bangladeshi infiltrators to justify the move. However, an RTI filed by India Today with the Ministry of Home Affairs (MHA) to know the exact number of illegal immigrants living in India didn’t fetch the number, rather bureaucratic jargons that said the Modi regime (Central Government) doesn’t maintain any list of illegal immigrants and directed the applicant to seek the numbers from the states. When the MHA, responsible for India’s internal security and intelligence, has no clue or any estimate about the number of so-called illegal Bangladeshi infiltrators living in India, then how did Shah claim that the Modi regime will conduct a nationwide NRC? What’s the exact number of legal and illegal immigrants in India?

As per Pew Research, the total number of migrants and immigrants, ie, legal and illegal foreigners, living in India for a period of more than one year was 5.19m in 2017, it was, however, 7.49m in 1990. Ironically, Bangladesh, the country that the Hindutva fascists and the Indian ruling classes call the citadel of illegal immigrants, saw an influx of immigrants during the same period. The same data source shows that while in 1990 Bangladesh had 880,000 immigrants and migrants, it became 1.5m in 2017, nearly double of what it was in 1990. Thus, while India lost 2.3m foreigners, staying legally and illegally in the country, Bangladesh gained 620,000 of them.

As Bangladesh’s economy is now clocked at a higher growth rate than India, even the immigrant labour that used to come to West Bengal for seasonal work, including harvesting, umbrella repairing, etc, has significantly dropped. There are still a few who have immigrated to cities like New Delhi, Bengaluru and Mumbai to work as domestic workers or construction workers, but they do not permanently live in India, rather, return back to Bangladesh after a period of time. The only immigrants who come to India for permanent settlement are the Hindus, who have relatives and can easily assimilate with the local population without raising any doubt of the Islamophobic state.

Despite knowing the minuscule number of immigrants in a country of 130 billion people, the Modi regime isn’t conducting a verification on its own to find out and identify the illegal immigrants, who aren’t refugees. Rather, it’s pushing the onus on the common people by making them non-citizens and then asking them to prove their citizenship by providing legacy documents to show that their forefathers were citizens of India. While the Indian justice system works on an accusatory model, where any accused is considered innocent until proven guilty through evidence in a court of law, the foreigner detection system turns the table on the accused and compels them to prove their innocence by providing documents and running pillar to post. The experience of Assam shows that it’s an inhuman system that either drives the poor towards destitution or towards suicide to escape the ordeal.

The narrative of illegal Bangladeshi infiltrators is incessantly encashed by the RSS and BJP to garner the support of Islamophobic, Hindutva fascism-incensed upper-caste Hindu elites, urban middle class along with a section of backward caste Hindus and ostracised Dalits as well. This entire propaganda is based on myths and lies, with no factual or documentary evidence to prove the exact number of illegal immigrants and their present status. The Modi regime’s conspiracy to communally split India should be thwarted by the people through their struggles against the anti-poor NRC and NPR. It must not be forgotten that the entire xenophobic narrative over illegal immigrants is created to help the BJP win elections. To do away with it and safeguard India, it’s necessary to politically defeat the RSS-BJP, the root of all evil.