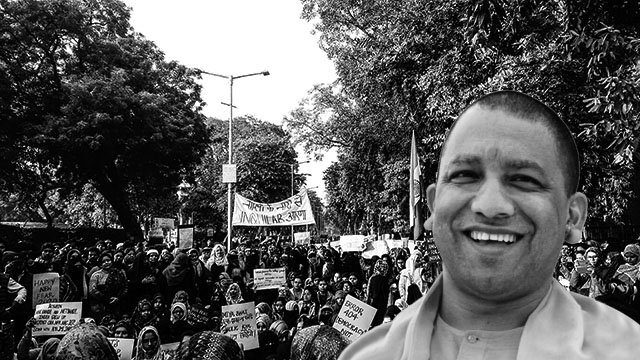 Speaking at a programme organised by the BJP as a part of its outreach to brainwash and radicalise susceptible Hindu minds on the CAA and NRC, Bisht said: “I want to say that if in the name of protest, anyone raises slogans of Azadi, like in Kashmir, then it would be considered an act of treason, and the government will take very strict action”.

Such a threat by Bisht, notorious for his bigotry and rioting, is nothing new. To crush the people’s genuine movements against the CAA and NRC, Bisht unleashed barbaric state terror targeting the students of Aligarh Muslim University (AMU) on 15 December 2019. On 20 December 2019, when Muslims throughout Uttar Pradesh took out rallies against the CAA and NRC, then they not only faced brutal state terror of Bisht’s administration, including baton charge, police firing and indiscriminate imprisonment of Muslim youth, but many of them were also slapped with hefty penalties for allegedly destroying public property. Such penalties were demanded by the police without any trial and the people were forced to cough up the money. Muslim children were also sexually abused by Hindutva fascist policemen in Muzaffarnagar of Western Uttar Pradesh.

“Now they have pushed women, members of their family, to sit in protest at every crossroads. This is a big crime as the male members are sitting inside their houses, sleeping in the blankets while women are made to sit at the protest,” Bisht alleged on Thursday. This statement of his once again exposed the sheer misogynistic outlook of the RSS-led Hindutva fascist camp. These nincompoops can’t imagine women independently taking a political leap and mobilising mass movements on their own, without being appendages of men.

If it’s a Muslim woman taking a political step independently, then people like Bisht — whose organisation’s leaders have urged Hindutva fanatics to rape the corpse of Muslim women — can’t gulp the fact and puke their filthy fascist bile out. The narrative designed by the Hindutva fascists that projects the Muslim women as extremely oppressed and enslaved by Muslim men and that they are supportive of the Modi regime after the latter criminalised an obsolete practice of Triple Talaq, are shattered by the optics of Muslim women protesting against the CAA and NRC throughout the country causing grave ignominy for the Modi regime itself.

When their vilification of the Shaheen Bagh movement by accusing the protesters of participating in lieu of Rs 500 per day didn’t work, when their attempts to stop women from participating in the sit-in at Lucknow’s Clock Tower by snatching their blankets, water and biscuits through the police didn’t deter the Muslim women protesting against the CAA and NRC, then the only way out for Bisht and his bosses like Modi is to accuse the Muslim men and the opposition parties of using the Muslim women as their puppets for ventriloquism. Yet, the lower they stoop, the new nadir of political indecency they exhibit, the more isolated they become. The struggle that the RSS and the BJP wanted to showcase as a “Muslim-only” movement, has become a nationwide rallying point of all opponents of Hindutva fascists from all communities. This has panicked the RSS and the BJP so much that they are now looking for all avenues to crack a whip on the Muslim women protesting against the CAA and NRC, to defuse the movement on a nationwide scale.

The slogan of Azadi, which demands freedom from tyranny, geographical or cultural colonialism, all forms of exploitation and bondage, isn’t one that people would raise seeking the permission of the Hindutva fascist camp. It’s their democratic right to demand freedom in a state that calls itself “free”. Both Bisht and Modi may slap charges of sedition, like the British colonial rulers, using British colonial-era sedition law, on Indian citizens demanding the very freedom that’s their birthright, but that won’t deter the Indian people, especially the Muslim women protesting against the CAA and NRC throughout India, because they have overcome their fear, and once they’ve lost the fear, the Hindutva fascism’s hegemony is bound to collapse.

The right answer to Bisht’s threats will be to intensify the people’s movements, especially the movements of Muslim women protesting against the CAA and NRC, throughout Uttar Pradesh and India to force the sclerotic Modi regime to retreat. Bisht and his Hindutva fascist handlers must be told in unambiguous terms that the poor, the oppressed and the marginalised people of India will not compromise on the idea of Azadi, despite brutal state repression and alike the British imperialism, its lackey Hindutva fascism will also face its doom in the battlefield of democratic struggles.