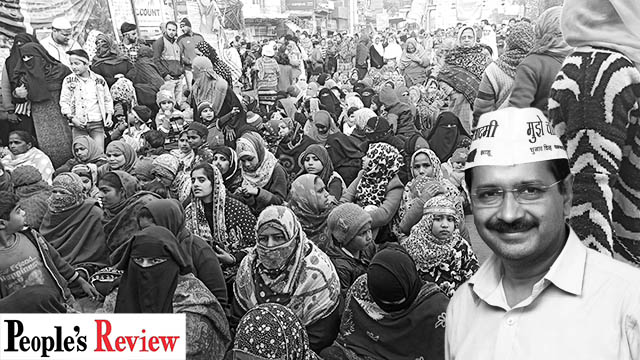 Delhi Chief Minister Arvind Kejriwal has invoked provisions of the Epidemic Diseases Act, 1897, in the wake of the recent outbreak of Coronavirus which has affected over 125 people in India. The Act has restricted the gathering of 50 or more people for any socio-religious, political or other purposes, except weddings. The Aam Aadmi Party (AAP) government has also said that protests like Shaheen Bagh, which are organised against Prime Minister Narendra Modi’s new citizenship matrix, won’t be allowed as from there the virus can spread. The ban on mass gatherings in Delhi with an indirect attempt to cull the longest-running organic women’s protest in the capital city shows how the Coronavirus threat is used to camouflage an attack on the people’s democratic rights.

As the women of Shaheen Bagh are determined to carry ahead their movement, they refused to budge to the AAP government’s pressure. They decided to carry on the protests without the iconic grandmothers, who have remained at the forefront since the beginning of the movement and instead carry on their struggle with less than 50 people at the site, using masks and hand sanitisers and sitting at a distance of one metre from each. They also made the sit-in rotational to ensure greater participation.

A clear checkmate for Kejriwal, who has been advancing the agenda of Modi’s Bharatiya Janata Party (BJP) to destroy the world-famous Shaheen Bagh struggle against the discriminatory Citizenship (Amendment) Act, 2019 (CAA), the National Population Register (NPR) and the National Register of Citizens (NRC). Earlier, through the anti-Muslim pogrom that took place between February 24th to February 27th in North-East district of Delhi, the sit-in protest in Maujpur and Jaffrabad were forcefully removed, the same happened with the protest demonstrations in Khajuri Khas.No wonder, Kapil Mishra, the culprit of Delhi’s anti-Muslim pogrom, whose men killed Muslims and burned their houses, called the Shaheen Bagh movement a suicide attack by Muslim women terrorists. Mishra accused the protesters of Shaheen Bagh, who have become scorn in his eyes and in his ambition to become Delhi BJP chief, of spreading Coronavirus in the city. His vilification comes shortly after Kejriwal’s warning and the women’s unwavering commitment to remain in the battlefield.

As Coronavirus outbreak has been limited to those who have either visited the affected countries or who came in touch with patients, it’s still not a pandemic in India and didn’t reach a community outbreak level, where the disease will spread between two people who have neither imported the disease nor came in contact with a patient. Thus, blaming the Shaheen Bagh women of being irresponsible, ironically by a man who instigated mob of feral thugs to butcher numerous Muslims in the city, is sheer political debauchery.

The Hindutva fascist camp led by the Rashtriya Swayamsevak Sangh (RSS) — the parent body of the BJP — is keen to destroy the pockets of resistance against the CAA, NPR and NRC. The anti-CAA-NPR-NRC movements pushed the Modi regime on backfoot all over the country. The RSS used its manpower to terrorise the Muslims through genocide in North-East district and thought that the Shaheen Bagh protests will end as well. But the women, showing resilience, continued their struggle. Kejriwal was, therefore, roped in to end the movement by invoking the provisions of the Epidemic Diseases Act, 1897, a colonial-era law that’s now used as a weapon against Indian people who are officially free.

Ironically, the Epidemic Diseases Act, 1897, is called the catalyst of Hindu extremist nationalism in India, whose legacy is carried forward till this date by the RSS-BJP and the Modi regime. It was the Epidemic Diseases Act, 1897, which was bitterly opposed by Bal Gangadhar Tilak and other Hindu extremist nationalists. Tilak was jailed for 18 months for opposing the Act in his newspapers — Kesari and Maratha — alleging that the law is discriminatory against Hindus.

The outbreak of plague in the former Bombay Presidency during the 1890s made the British imperial regime enact the law and it allowed its soldiers to raid homes and strip people to scan them for plague signs. Communal hospitals were established to treat upper-caste Hindu, Muslim and Parsi patients separately. The dalits had no entrance in these. Tilak accused that the British forces are deliberately humiliating Hindus and dishonouring their women by stripping them while leaving the Muslims due to their Purdah culture.

Tilak’s propaganda against the Epidemic Diseases Act, 1897, helped to foment anti-colonial sentiments and brothers of a brahmin family, Damodar, Balkrishna and Vasudeo Chapekar, shot at WC Rand, ICS, Chairman of the Special Plague Committee in 1897. Rand’s military escort Lieutenant Ayerst died on the spot whereas Rand died a few days later due to wounds. It was the first revolutionary assassination in the post-1857 phase and struck panic in the hearts of the British imperialist rulers. The three brothers were hanged by the British colonial rulers and are revered as martyrs by the people. Tilak hijacked the issue and turned the anti-colonial wave against the atrocities unleashed through the Epidemic Diseases Act, 1897, into a communal issue of Hindu pride. At the end of the 19th century, the Epidemic Diseases Act, 1897, helped the British colonial rulers in dividing the people communally, thanks to the likes of Tilak, who under the garb of nationalism, promoted brahminical hegemonist theory and bigotry to help the British rulers.

Today, after 123 years, the same Epidemic Diseases Act, 1897, is used to push forward a communal agenda, which aims at destroying the people’s struggle waged primarily by the Muslim women against the notorious CAA-NPR-NRC juggernaut. Their movement didn’t suffer despite all attempts by the RSS-BJP. Now that all methods have failed, the hullaballoo over the Coronavirus outbreak is used to scare the resolute women of Shaheen Bagh and the AAP and Kejriwal came as the saviours of the RSS-BJP and the Modi regime. Can the threat of this new plague desist the Indian women fighting for their constitutional rights and freedom to live their lives without being apologetic about their identity? How the brave women of Shaheen Bagh and other places resist the government and its conspiracies are to be seen in the days to come.