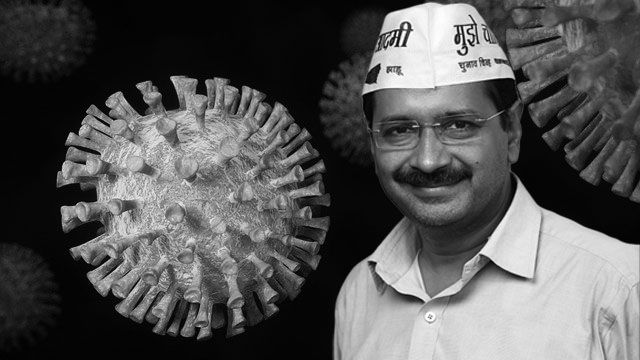 Delhi Chief Minister Arvind Kejriwal is rebuked for his government’s inefficiency in handling the COVID-19 pandemic outbreak in the city-state. While the Delhi Government’s official version admits that the COVID-19 pandemic in Delhi has entered a community transfer level, the Union government headed by Prime Minister Narendra Modi has rejected the claim. Harsh Vardhan, a Delhi-based ruling Bharatiya Janata Party (BJP) leader and the Union minister looking into the health portfolio, said that there is no community transmission of COVID-19 to shield Prime Minister Modi’s disastrous “unlock” drive after a two-month-long lockdown.

Due to its high population density, an unplanned opening up — under the “unlock” programme — made Delhi a death trap. At present, the number of tests per million in India is at dismally low – 3,149 per million. In Delhi, there has been a sudden fall in the number of tests, while the number of COVID-19 positive patients are on the rise. On May 28th, there were 7,615 tests done, which fell to 3,700 on June 8th and on June 11th, as per the Delhi government’s data, 5,297 tests were done, out of which 1,877 samples were positive. This means there is 35.45% positive case detection, and this must ring a vexing alarm. Only no one cares.

With 24,013 active infected cases out of a total 38,958 cases and 1,271 deaths, Delhi has a perilous recovery rate of 38.36% only, which is lower than the pan-India recovery rate of 52%. Though Kejriwal’s Aam Aadmi Party (AAP) swept the Delhi Assembly election in February 2020 by flaunting its work in the public healthcare and education sectors, the moment it was entrusted with the responsibility of combatting the COVID-19 pandemic in Delhi, the much-hyped public healthcare system crumbled like a sandcastle before tidal waves.

Why is the AAP government not dealing with the COVID-19 pandemic in Delhi seriously and allowing the BJP to exploit the situation and criticise it for its failures? Is Kejriwal deliberately leaving the turf to Modi? Though Kejriwal tried to cosy up with Modi since the last one year and didn’t protest against the BJP’s anti-Muslim pogrom in February 2020, it’s unlikely that Modi or the BJP will spare him in the present situation.

When Delhi, like India, was reeling under Modi’s monstrous lockdown and seeking an “unlock” option to resume economic activities, Delhi Health Minister Satyendra Jain said: “The Delhi government believes that there should be a balance between the fight against COVID and economic activities. We are fighting against the COVID-19 with full effort, but now we have to start the economic activities, therefore, the measures should be followed. When the lockdown was imposed at that time we were not prepared to fight this pandemic, but now we are prepared to fight this pandemic.” (sic). Jain said that people should learn to live with the COVID-19.

This proposal of co-existing with a virus, which the government can’t combat, as can be seen from the mounting death toll and the total chaos in hospital management within a period of one month, implies that there is a reluctance to take affirmative actions at higher echelons of power. The private hospitals, run by big corporate entities, are profiteering by exploiting the pandemic situation. They are aggravating the crisis by creating an artificial shortage of bed, oxygen, ventilators, etc, and allowing the poor to die. Neither Kejriwal’s nor Modi’s regime can combat this menace as they both are servile lackeys of these big corporate houses that own the private healthcare industry.

It’s imperative to ramp up the number of testing, tracing, treating to curb the COVID-19 pandemic in Delhi. The much-hyped “unlock” must be restricted by the state while supporting the poor. Kejriwal must realise that his “unlock” idea, excluding the containment areas, can’t work properly when asymptomatic cases are rising, and the infection is becoming fatal for people due to lack of treatment or care.

The Delhi government should follow a rigorous containment strategy followed by scaled-up proactive testing, tracing and isolating exercise. The whip must be cracked on the private hospitals. Modi’s opposition or interference can be exposed before the people, allowing them to see whose side the BJP takes, the people’s or the private healthcare industry’s. But the issue is neither the AAP will show the courage to counter the BJP nor do anything to control COVID-19 pandemic in Delhi due to its sheer lack of political will, inefficiency in managing the healthcare crisis and its secret compromises with the Modi regime. This will spell doom for Delhi.