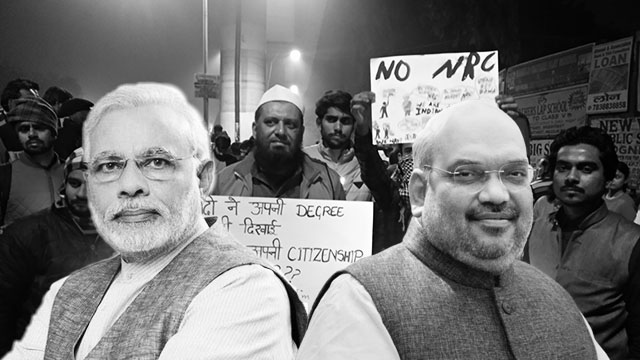 There is a piece of news that no mainstream media outlets have published to save Prime Minister Narendra Modi’s government from ignominy and an abject political crisis. The Union home ministry under Amit Shah has failed to finalise the rules of the contentious Citizenship (Amendment) Act, 2019, or CAA (2019). The last date of finalising the rules of the CAA 2019 was June 18th 2020 as rules should be framed within six months from the day of a law’s gazette notification. The Modi regime published the gazette notification of the CAA 2019 in January 2020 after the law was passed in both Houses of the Parliament in December 2019.

As per procedures, the rules––made by the executive describing the modus operandi or standard operating procedure of a law––must be tabled in both Houses of the Parliament for approval. The home ministry is blaming the failure in finalising the rules within the stipulated timeframe of six months on the COVID-19 pandemic. The Modi regime has sought another six months extension, ie, time until December 2020, from the Lok Sabha’s presiding officers to finalise the rules of the CAA 2019.

However, with the mandatory procedure that calls for a subordinate legislation committee of the Parliament to scrutinise the rules to vet whether these were framed in conformity with the Act notified in the gazette, will further delay and complicate the process as Modi’s Bharatiya Janata Party (BJP) doesn’t have a majority in the committee and it has to, therefore, woo other parties a lot.

As the CAA 2019 is a contentious law, which triggered a massive nationwide outrage against the Modi regime, with the latter resorting to macabre atrocities to suppress the people’s anger, there are fewer chances that the committee, where YSR Congress, which now opposes the law after supporting it in the Parliament, is at the helm, with members of the Congress party and the Dravida Munnetra Kazagham dominating it, will allow the finalisation of the rules of CAA 2019 swiftly.

Apparently, it will appear as if the BJP is in a fix due to the lacklustre attitude of the home ministry. The back-channel diplomacy the party will resort to, in order to have the rules finalised, will create an optics of its urge to have the law’s rules notified at the earliest. However, it’s not the case. The BJP isn’t in a hurry to finalise the rules of the CAA 2019. If the BJP wanted, then the Modi regime could’ve had the rules finalised by the executive before enacting the law.

The rules of CAA 2019 could’ve been finalised even before the law was enacted and that’s not something extraordinary. The Citizenship (Amendment) Act, 2003, or CAA 2003, was passed by the upper house Rajya Sabha––where it was first introduced––on December 18th 2003, then the bill was passed by the lower house Lok Sabha on December 22nd 2003 and it got assent on January 7th 2004. The law finally became effective from December 3rd 2004. Surprisingly, the rules of the CAA 2003 were finalised on December 10th 2003, eight days before the Rajya Sabha passed the bill! So why didn’t the Modi regime finalise the rules for CAA 2019 in advance if the law is so important for its politics?

This delay in finalising the rules of the CAA 2019 is a smokescreen. It’s done according to a well-planned strategy of the BJP, which wants the rules to be finalised and notified only after the National Population Register (NPR) exercise is completed. The delay in the finalisation of the rules is deliberately done to ensure that most non-Muslims, especially dalits and tribals, don’t join the bandwagon against the NPR drive.

We at People’s Review have been showing that the NPR and National Register of Citizens (NRC) exercises are undertaken by the Modi regime as per the CAA 2003, which introduced the term “illegal immigrant” in the parlance of Indian citizenship and mandated the completion of a National Register of Indian Citizens (NRIC) to disenfranchise a majority of the Indian poor and turn them into rightless modern slaves for big corporations.

However, to keep these majority of non-Muslims, ie, 85% of Indian people, aloof from any movement against the NPR and the NRC, the Modi regime and the BJP have been propagating a lie that the NRC will only affect the Muslims and the CAA 2019 will save the Hindus, Sikhs, Christians and other non-Muslim communities if they lose citizenship. Neither the CAA 2019 has any provision to take-away an individual’s citizenship, unlike the CAA 2003, nor can it grant citizenship arbitrarily to non-Muslims who will lose it during the NRIC exercise.

The CAA 2019 has been a docile tool to bamboozle and hoodwink Hindus to ensure they consider the anti-NRC and anti-NPR movements as exclusively Muslim affair and stay aloof from them. It’s only after the NPR is updated, the Modi regime, which has linked people’s Aadhaar data with voter card, ration card, driving license and even medical insurance, will strike-off the majority of poor, who are mostly dalits, tribal, backward caste Hindus, Buddhists, Christians, Sikhs and Muslims, and deny them any right to avail welfare measures.

As non-citizens, these people will have no rights to demand justice or equality, they can’t even bargain a fair wage for themselves and the state and corporates will save a lot of money by throwing these people into an abysmal crisis using the draconian provisions of the CAA 2003. Moreover, these people will be even denied the right to vote or become politically vocal as they won’t be enjoying any rights reserved for the citizens. This will safeguard the BJP from any electoral threat from such disgruntled sections.

In this article, it’s shown how the Modi regime is fooling the Hindus using the CAA 2019, which will only grant citizenship to 31,313 people and allow another few thousand to apply afresh. There is no provision in the CAA 2019 to provide citizenship to Hindus or non-Muslims who will lose citizenship due to an NRC exercise. The rules of CAA 2019, once notified, will exhibit this truth and, hence, it will trigger outrage among the non-Muslims which can jeopardise the BJP’s agenda of helping corporates with a pool of rightless poor people. The rules of the CAA 2019 will also expose the lie peddled by different state governments that have passed resolutions in their assemblies saying they won’t allow the law to be implemented, which is again impossible under India’s constitutional arrangement that gives the Union extreme power vis-à-vis the states and denies the states any right to refuse the implementation of a law enacted by the Parliament.

Many would allege that the CAA 2019 rules are delayed eyeing the forthcoming Assam and West Bengal assembly elections in 2021. A large number of Bengali Hindus in these two states, who have migrated from former East Pakistan––now Bangladesh––have been living under perpetual fear of losing citizenship rights under the NRIC. In the recently-concluded Assam NRC exercise, 1.9m people lost their citizenship, out of which 1.2m, ie, the majority, are Bengali Hindus. These people are desperately waiting for the CAA 2019, expecting it to grant them citizenship. But the CAA 2019 can’t do that. The BJP won’t be affected even if the rules of the CAA 2019 are finalised before the elections provided the NPR is completed so that the affected poor people are denied voting rights, which will neutralise any threat to the BJP from their votes.

The BJP isn’t particularly trying to weed away Muslims from the country, but it’s trying to create a massive pool of poor without rights so that the corporate houses can profiteer by employing slave labour and the general wages can come down due to a competition between the non-citizen and citizen labourers. This will fuel antagonism between citizen poor and non-citizen poor but will immensely benefit the rich. The monopoly-finance capitalist system is globally in a quagmire of an abysmal economic crisis and only cheap labour and extreme exploitation can help it revive itself. Thus, it’s not just NRIC in India, but throughout the world, the people are divided by the fascist agents of capital using xenophobia against the “infiltrators” and immigrants.

It’s imperative for all stakeholders protesting the CAA 2019 to understand that until the NPR is boycotted by India’s Hindus, the BJP’s sinister agenda of turning millions of poor into non-citizens can’t be thwarted. The Hindus will suffer the most as they are the majority in the country most of them lack the papers to prove their citizenship according to the CAA 2003. The Modi regime will not relent from persecuting the poor and to ensure its conspiracy isn’t exposed, the rules of CAA 2019 will be finalised with a long delay. Thus, it’s time to ensure that the Hindus are made aware of the malevolent agenda of the Modi regime and the BJP, and they are brought in the struggle against NPR, NRIC and the CAA 2003.