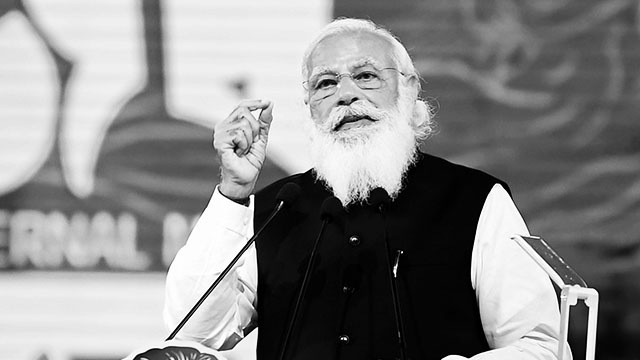 Prime Minister Narendra Modi’s power to stun his audience with sheer lies remains unchallenged. Modi’s claim of being jailed for Bangladesh’s freedom struggle reaffirmed that he has taken the “art of lying” to the highest level. The sheer confidence with which he lies, not only in election rallies of his Bharatiya Janata Party (BJP) but also in diplomatic meets like his two-day-long state visit to Dhaka, marred with violence, on the golden jubilee celebration of Bangladesh’s independence and birth centenary of its first president Mujibur Rahman, shows his ability to set deceptive narratives by using the Goebbelsian methodology.

While addressing Bangladeshi and Indian delegates on the occasion of Bangladesh’s 50th National Day on March 26th 2021, Modi said: “In the struggle for Bangladesh’s liberation…participating in that struggle, was also one of the first movements for me. My age must have been 20-22 years old when me and several of my colleagues did a Satyagraha (peaceful sit-in demonstration) for the freedom of Bangladesh’s people. In support of freedom for Bangladesh then I courted arrested and had a chance to go to jail… which means, for Bangladesh’s freedom, the amount of zeal that was on this side was also on that side.”

Though there has been an online storm over Modi’s claim of being jailed for Bangladesh’s freedom struggle, it’s a fact that the BJP’s precursor Bharatiya Jan Sangh (BJS), the former political arm of the Rashtriya Swayamsevak Sangh (RSS), organised a demonstration in New Delhi. But it’s not known whether Modi was a part of the movement. The BJS—supported by the RSS—demanded that the Government of India, under former prime minister Indira Gandhi, recognise the independent “Bangladesh” and rallied to the Parliament building on May 25th 1971, where the Delhi Police arrested them for violating the Section 144 imposed in the area. The agitators were later released. No one was imprisoned per se.

By referring to the incident, where there was a token arrest by the police for violating the Section 144 restrictions at the Parliament building—forget the gory atrocities by the same police on students marching to the Parliament during Modi’s reign—and not for any valorous protest movement, Modi is spinning a narrative to present himself, who was, on the account of his age, a foot-soldier in that movement spearheaded by Atal Bihari Vajpayee, as a “war hero”. It’s a dastardly act and not humorous at all, as the liberals are presenting it. Modi is manufacturing a legacy for himself using the BJS’s insignificant show of strength.

While the BJS and the RSS were supportive of Mrs Gandhi’s Bangladesh scheme, they had their nefarious agenda. Firstly, the RSS wanted to titillate the upper-caste Hindus in north India as well as in West Bengal, then under the flames of the Naxalbari peasants’ uprising, with Islamophobia and, secondly, it wanted to establish the narrative that in case Shyama Prosad Mookerjee didn’t oppose the idea of a United Bengal, proposed by Sarat Chandra Bose and Huseyn Shaheed Suhrawardy, then the Bengali Hindus in a Muslim-majority country would’ve faced the same fate. However, the RSS and the BJS, supported by the big comprador capitalist class’s media houses, concealed the fact that the Bengalis, irrespective of their religion, were butchered by the Pakistani henchmen.

The “Bangladesh” project was used by the RSS to drive home the dream of “Akhand Bharat”, ie, a Brahminical upper-caste Hindu elite-ruled undivided landmass from Afghanistan to Thailand. The defeat of the Pakistani forces, backed by the US, at the hands of the allied forces of Bangladesh Mukti Bahini (Liberation Army) and the Indian Army backed by the Soviet Union, was a moment of ideological triumph for the RSS. Despite the US, to which the RSS has been subservient since 1948, losing to the Soviet side in the Bangladesh War of 1971, the Hindutva outfit found the optics suitable to claim “Hindu supremacy” against Muslims.

The RSS eulogised Mrs Gandhi and so did Vajpayee. But their love for Bangladesh, for which the fascist Awami League government even awarded the former prime minister Vajpayee, wasn’t genuine. Despite Modi’s claim of being jailed for Bangladesh’s freedom struggle, it’s a fact that since the formation of Bangladesh, while on the one hand the RSS intensified Hindutva fascist propaganda against Muslims and blamed them of infiltrating into India, a chimaera that helped it to polarise Hindu voters in Assam and West Bengal, on the other hand, it turned millions of Hindu, especially ostracised Dalits, stateless when Vajpayee’s regime passed the Citizenship (Amendment) Act, 2003 (CAA 2003).

As per the CAA 2003, those who entered India from the former undivided Indian territories under Pakistan after July 19th 1948 and didn’t register themselves as citizens will have the status of “illegal migrant” and they, along with their descendants, can’t be Indian citizens. The CAA 2003 provisioned an exercise to create a National Register of Indian Citizens (NRIC or NRC), which will disenfranchise millions, mostly the Bangladeshi Dalit and Buddhist refugees.

The Modi regime brought another CAA in 2019 under the pretext of providing citizenship to those non-Muslims who have fled Afghanistan, Bangladesh and Pakistan due to religious persecution and entered India before January 1st 2015. But it has no provision for the citizenship of the non-Muslim refugees from Bangladesh. The CAA 2019 only allows 33,313 refugees, mostly from Afghanistan and Pakistan, to apply for citizenship as they registered at the Foreigners Regional Registration Offices (FRROs) as victims of “religious persecution” and received long-term visas (LTVs). They got exemptions under the 2015 and 2016 amendments to the Foreigners Rules, 1948, and Passport (Entry into India) Rules, 1950, and won’t be considered as illegal migrants.

Those who came from Bangladesh before and after 1971, especially after “Operation Searchlight” that started on March 25th 1971, didn’t get a chance to either register for citizenship due to their marginalised socio-economic conditions and most of them didn’t apply for LTVs stating “religious persecution”. Despite fulfilling other criteria under the CAA 2019, they won’t be able to apply for it as they don’t have exemptions. But still, to ensure they vote in favour of the BJP for getting citizenship, Modi and the BJP are hoodwinking them with the bait of the CAA 2019 and showing fake concern for their agony. It’s only after the Assam and West Bengal Assembly elections are over that the BJP will carry out a nationwide NRC and disenfranchise the very people it promised to protect.

Hence, when Modi’s claim of being jailed for Bangladesh’s freedom struggle sparks a storm over whether the man courted arrest on May 25th 1971 at the Parliament complex or not, at present his government, following the Indian state’s Brahminical prejudices against the Dalit and backward class refugees from Bangladesh, is trying to create a massive pool of stateless labourers using the victims of religious persecution and the Bangladesh War. This is the real face of the RSS’s love for Bangladesh. For the Hindutva camp, Bangladesh will always be a pawn in the quest for South Asian hegemony.