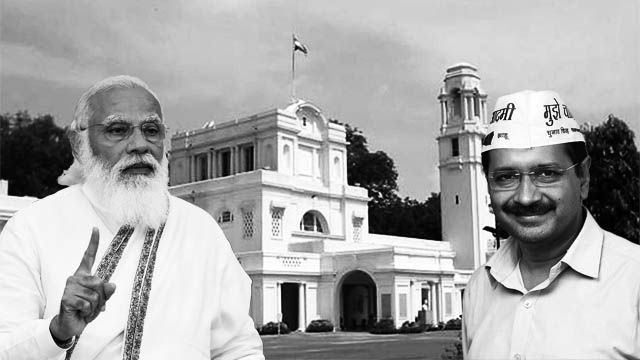 As the Indian Parliament’s upper house Rajya Sabha passed the Government of National Capital Territory of Delhi (Amendment) Bill, 2021 (GNCTD Bill) on Wednesday, amid uproar from opposition parties, the ruling Bhartiya Janata Party (BJP) drove yet another nail into the coffin of what can be called the pre-2014 façade of democracy.

Because while one may not have much sympathy or care for Delhi Chief Minister Arvind Kejriwal’s opportunist politics who turned a mute spectator when the saffron party did the same to Kashmir not so long ago, disdain for his opportunism cannot make one turn a blind eye to the latest act of Prime Minister Narendra Modi’s government in the series of grabbing rights of others.

The GNCTD Bill says that the ‘government’, referred to in any law to be passed by the legislative assembly, would mean the Lieutenant Governor (LG). As per the GNCTD Bill, the Delhi government must obtain the opinion of the LG before implementing any policy decision. Kejriwal and his Aam Aadmi Party (AAP) members called it an “unconstitutional” attempt to make the Delhi government “administratively impotent” by a political party that has been made “electorally impotent” by the people of the national capital.

Not so long ago, India had to suffer global humiliation when the latest annual report on global political rights and liberties by Freedom House, a US-government backed NGO, downgraded its status as a democracy and free society to ‘partly free’.

And who can blame them?

Because what are the pillars of parliamentary democracy? The legislature, executive, judiciary and the media are the textbook definition.

Lesser said about the mainstream media and their spine or the lack of it, the better. And while the dance of the death of democracy has been played out several times in the last seven years, there could be no better example than the latest grotesque act by way of the GNCTD Bill, which seriously undermines the legislature.

The Bill, which seeks to amend the definition of government, brings a democratically elected government under a selected person appointed by the Union government – the LG. By reducing the status of the state government and a state’s legislative assembly being subservient to a Central Government appointee, the GNCTD Bill tramps upon the democratic rights of the people, who the elected members represent. By widening the powers of the LG over the Delhi Assembly and making the latter seek approval even in routine administrative matters or conducting inquiries concerning administrative decisions, the GNCTD Bill invalidates a democratically elected government.

What’s important to note is that the provisions of the GNCTD Bill are at odds with the Supreme Court’s ruling and the Constitution. As this report by The Wire discusses the tenability of several provisions under the GNCTD Bill, in particularly this “Another crucial amendment requires the state government to obtain the opinion of the LG on their decisions before executive action is taken on those decisions. Thus, the elected government cannot take any action unless it obtains LG’s opinion. A government is often called upon to take urgent decisions and actions on issues concerning people’s lives.  But after this amendment comes into force, it will have to wait till the LG deigns to give their opinion on the decisions of the government.”

Stating that his amendment nullifies the decision of the Supreme Court in the Government of NCT of Delhi vs Union of India, which has held that the elected government of Delhi can take all decisions within its jurisdiction and execute them without obtaining the concurrence of the LG, it clarifies that in case of a difference of opinion on a matter between the LG and the government, the former should make all efforts to resolve it and only in extreme cases should she refer the matter to the president for a decision.

With the amendments intended to nullify the impact of the Supreme Court judgement, which laid out that the LG would be bound by aid and advice of the elected government, except in matters pertaining to police, land and law and order, it is pertinent to note that the Modi government is now not shying away from eroding at the judiciary.

To say that this latest act by the BJP government is a threat to all other states ruled by opposition parties would not be an understatement. It is merely opening the floodgates and setting a precedent for what is to come in the days ahead.

It is probably the reason why, that opposition parties, including the Kashmiris, who have not forgotten Kejriwal’s betrayal and turncoat politics when he lent his support for the abrogation of Article 370, are now supporting him at this juncture against the GNCTD Bill. As Mehbooba Mufti described it, “This isn’t just disempowering a political rival or the federal structure but disempowerment of the popular vote.” Dark days lie ahead if the vote no longer counts.