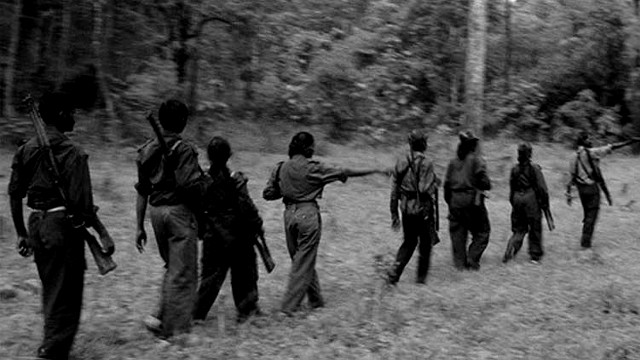 Around 23 paramilitary personnel were killed in an ambush with the Communist Party of India (Maoist) [CPI (Maoist)] guerrillas in central India’s Chhattisgarh on Saturday, April 3rd 2021. There are reports that a woman guerrilla of the Peoples’ Liberation Guerilla Army (PLGA) was also killed in the ambush, which took place at the Jonaguda village which falls under Jagargunda police station. One government soldier is reportedly taken as a captive by the ultras, while 32 are injured in this ambush. This recent Chhattisgarh Maoist attack has again placed the ongoing civil war in India’s underbelly at the front row of public discourse.

On the night of Friday, April 2nd, around 2,000 paramilitary soldiers belonging to the Central Reserve Police Force (CRPF), its elite Commando Battalion for Resolute Action (CoBRA), District Reserve Guard (DRG) and the Special Task Force (STF) launched a joint operation from five places—Tarrem, Usoor and Pamed in Bijapur, and Minpa and Narsapuram in Sukma—over a tip that a PLGA commander, Hidma, is present in the location. Hidma has a bounty of Rs 2.5m and it’s alleged that the lead was bait by the PLGA to lure the forces into an ambush.

The CRPF, CoBRA, DRG and STF soldiers came under heavy firing on their return from the raid and the conflict went on till Saturday morning. This ambush didn’t take place in dense forests, which used to be the modus operandi of the PLGA, but very close to the paramilitary camp. The Chhattisgarh Maoist attack disrupted the incessant election campaigning by Union Home Minister Amit Shah and the state’s Chief Minister Bhupendra Baghel, who were in West Bengal and Assam respectively.

Rather than providing objective optics of the recent Chhattisgarh Maoist attack, the mainstream press has jumped into the fray to become the government’s megaphone and it has been amplifying the government’s jingoistic narrative by isolating the conflict from the larger perspective of a two-decade-old all-out civil war. To uphold the interests of their advertisers and corporate sponsors, most media houses have painted this conflict as a case of “mindless” violence by an ultra-left organisation. They haven’t placed, for obvious reasons, the onus of the responsibility on the government, which has been dragging the conflict on for years.

The CPI (Maoist) and its PLGA have been involved in this protracted armed struggle against the state following the latter’s drive to evict tribal people and seize control of the water, forests and land—with rich minerals beneath—so the big mining corporations can profiteer by exploiting the earth. In the last two decades, the Indian state, under the banner of “development”, has waged a war against the indigenous people of India’s mineral-rich eastern and central forest-covered regions. The Chhattisgarh Maoist insurgency was triggered by such reckless pro-corporate servility shown by the government and, so far, the government has shown no intention to resolve the impasse through dialogue.

Even after losing several men and women in the conflict, the CPI (Maoist) could sustain the government’s onslaughts and repression by utilising the tribal people’s anger against the environmental destruction by big mining corporations. Under the Atmanirbhar Bharat programme, Union Finance Minister Nirmala Sitharaman opened the floodgates for corporates in the mining of coal and minerals. It’s this “development” through the destruction of lives and livelihoods of tribal people and by evicting them from their land, which has intensified the conflict and provided oxygen to the CPI (Maoist) in the region.

The government has relaxed laws regarding forest land acquisition, and Gautam Adani, one of the top sponsors of Prime Minister Narendra Modi’s Bharatiya Janata Party (BJP), has got 55,000 acres of pristine forestland at Hansdeo Arand, overriding all environmental guidelines. The big corporations like Adani, Essar, Tata, Vedanta, etc, have been eyeing minerals and forestlands, which the government has allowed them to plunder for free.

Under the garb of “development” of a few, ie, 10% of Indian people who have purchasing power, the destruction of millions of aboriginal people is carried on, unabashedly, yet, such violence seldom gets reported in the press. According to a 2011 study, 50m people were internally displaced within the first 50 years of “Independence” in the name of “development”. The government’s data says 40% of those displaced have been tribal people.

According to Biswaranjan Mohanty, the large scale projects under the guise of “development” have always helped the rich to get richer, while the poor paid the price. Mohanty writes: “In the case of India’s development model, displacement caused by large projects has actually resulted in a transfer of resources from the weaker sections of society to more privileged ones. Mega dams, in particular, create victims of development – mainly tribals who never share the gains of development. It can be said that the bigger the development project, the greater the centralised control over it. This centralisation has a bias in favour of large landholders, rich farmers, engineers, bureaucrats and politicians. (sic)”

Reprimanded, gagged and devoid of resources to be audible and sans the political power to stall the juggernaut of corporate-led “development” from ravaging them, their lives, livelihoods and the environment they have protected from harm so far, the agitated tribal are taking up weapons against the big capitalists and the state, which is the cause of the recent Chhattisgarh Maoist attack on paramilitary troops. The vicious cycle of violence continues in the underbelly of India unabated, while New Delhi and Mumbai middle-class and elites crave crumbs of “development” that will trickle down to their plates from the top.

Under Modi’s BJP, the government apparatuses are unapologetically furthering the corporates’ cause and no visible initiatives are taken to establish peace through meaningful dialogue. Earlier, whenever the CPI (Maoist) showed eagerness to start a dialogue, the government either asked it to surrender, killed its leaders like Cherukuri Rajkumar (alias Azad), or rejected their demand to release 20,000 innocent tribal people lodged inhumanely in Indian jails. The sheer hubris of the government is forcing thousands of soldiers into a death trap and killing them in a war that’s not theirs.

Thousands of youths from poor and lower-middle-income groups join the paramilitary forces to make a living. They are used as pawns by the corporates in their war against the tribal people. Rising frustration among soldiers has triggered early retirements from the forces and even mental health issues that lead to suicides. More soldiers committed suicides or died due to accidents than due to conflicts in recent years. But the government’s apathy towards the soldiers, their wellbeing, and its sheer desperation to grab natural resources and hand them over to big corporates allow the bloodbath to continue.

The Chhattisgarh Maoist attack and the subsequent death of 23 soldiers exposed an alarming situation. It’s the government’s responsibility to bring the rebels to dialogue and ensure that the lives and livelihoods of the tribal people and other marginalised people, who are equal stakeholders of the democracy, are protected. The government must act for peace rather than show its machoism by continuing the conflict for the profits of a few rich, which will kill numerous poor people on both sides of the frontier. Peace indeed is needed, but a graveyard’s piece isn’t good for anyone.