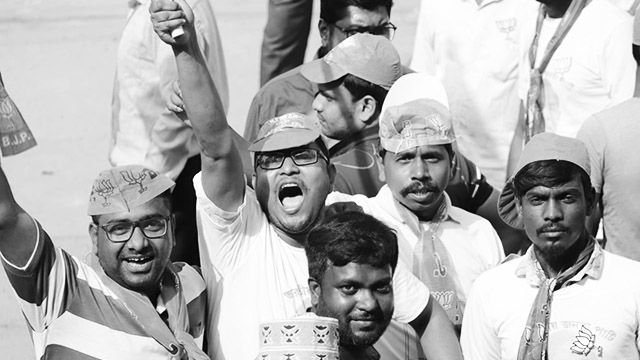 The Bharatiya Janata Party’s (BJP) humiliating defeat in the 2021 West Bengal Assembly elections has given a rejig to the Opposition. The BJP’s defeat in the West Bengal polls is seen as a personal loss of Prime Minister Narendra Modi and his deputy, Union Home Minister Amit Shah, who had hyper-actively campaigned even in the lanes and bylanes of the state to boost the saffron party’s prospects. Chief Minister Mamata Bandopadhyay is hailed as a giant slayer. Political pundits, citing Modi’s despicable position, are predicting a bigger role for Bandopadhyay in the ‘national’ politics.

Opposition parties are predicting a victory in the forthcoming 2022 Uttar Pradesh Assembly elections and the 2024 Lok Sabha elections, as the BJP is suffering setbacks due to Modi’s failure to curb the COVID-19 second wave. However, weaving such dreams based on the BJP’s defeat in the West Bengal polls can later leave the Opposition in sheer ignominy. The BJP, in general, and the Modi regime, in particular, have a track record of recovering lost ground and tide over anti-incumbency by playing the cards of a communal pogrom, jingoism or xenophobia.

It’s true that the BJP leadership, especially Modi himself, took the battle for West Bengal as a prestige issue and were overconfident of winning the state. The BJP’s defeat in the West Bengal polls was a result of the consolidation of anti-BJP votes, however, that doesn’t override the fact that the saffron camp has penetrated deep in the state and from an underdog it has become a principal contender for power. From a long-term perspective, the BJP’s defeat in the West Bengal polls is actually a blessing in disguise for the saffron camp as they have become the principal Opposition in the state.

During the 2019 Lok Sabha elections, the BJP won 18 seats, pulverising the Congress party and the parliamentary left to become the chief challenger to Bandopadhyay’s hegemony. Though Bandopadhyay’s TMC maintained a lead with 22 seats, the BJP increased its vote tally to 40.7%, which is a 23.68 percentage point jump in vote share. Though many credited the shifting of the ailing left’s anti-TMC vote to the BJP’s camp for its victory, the Rashtriya Swayamsevak Sangh (RSS)—the BJP’s paternal body—has played a pivotal role in this shift.

The BJP’s vote share in the 2021 West Bengal Assembly election dropped by 2.57 percentage point vis-à-vis the 2019 Lok Sabha elections’ vote share. The BJP got 38.13% votes, and this is its historic high in terms of the state assembly election as well as the lowest drop vis-à-vis the previous Lok Sabha election. Now if compared to the 2016 West Bengal Assembly elections, where the Congress party and the ailing left became principal contenders of the TMC, the BJP’s vote share has increased by a whopping 27.97 percentage points, which throws a serious challenge before the state’s democratic, secular and progressive forces.

It’s the RSS’s groundwork, communal propaganda and raising of large contingents of Hindutva fascist stormtroopers to incite violence, which paid a rich dividend to the BJP between 2014 to 2021. Though the RSS has been working in West Bengal’s tribal belts and refugee colonies since the 1970s to recruit mercenaries, its work intensified and increased manifold since Modi’s ascension to power. This can be estimated from the exponential rise in the number of radicalisation centres run by the RSS in West Bengal.

While the RSS has grown exponentially since 2011, raising more than 1,600 Shakhas or branches of armed mercenaries, the state government didn’t take any concrete step to curb the menace. The only time the Bandopadhyay’s government acted tough on the saffron camp was in 2018 when 125 RSS-run radicalisation centres were closed by the state’s education department. There are more than 500 such centres that masquerade as ‘schools’ to hoodwink the masses. The decision has been challenged in the Calcutta High Court. The number of people joining the RSS every year has also been on the rise and West Bengal is competing with Yogi-ruled Uttar Pradesh in terms of the number of new recruitments in the Hindutva terror outfit.

Even though the BJP’s defeat in the West Bengal polls is shown as people’s mandate against the Hindutva fascist camp, the amount of vote that the party has got isn’t negligible. Moreover, the 2021 West Bengal Assembly elections’ results show that the state’s politics is now polarised in two right-wing camps. This means, the anti-TMC or the anti-incumbency sentiments will be exploited largely by the BJP, especially when it comes to resisting the violence unleashed by the TMC men on opponents. There is no third alternative.

Through its money power and corporate backing, the BJP will, on the one hand, fuel communal tension through fake news peddling, as it was found during its recent campaign over “Hindus under threat” by adding communal colours to the post-poll violence in the state, on the other hand, it will use the Union powers to destabilise the state and destroy its economy. Moreover, with the citizenship issue looming large, the Modi regime can easily now conduct the National Register of Citizens (NRC) exercise, as it’s not under any compulsion to woo non-Muslim refugees for votes. The NRC will disenfranchise millions in West Bengal, like neighbouring Assam.

The BJP’s defeat in the West Bengal polls isn’t a yardstick to gauge the victory of the anti-fascist movement. It’s just a temporary halt to the Hindutva fascist juggernaut in West Bengal and there is an ardent need to augment an all-out political struggle to uproot the BJP-RSS from the state for the sake of the long-term security of the people. This can be done only by genuine anti-fascist forces by fighting for the principal opposition space in the state. Unless the BJP, along with the RSS, is uprooted from the principal opposition’s space and the progressive-democratic forces fills that space, no tectonic change can take place in West Bengal’s politics.