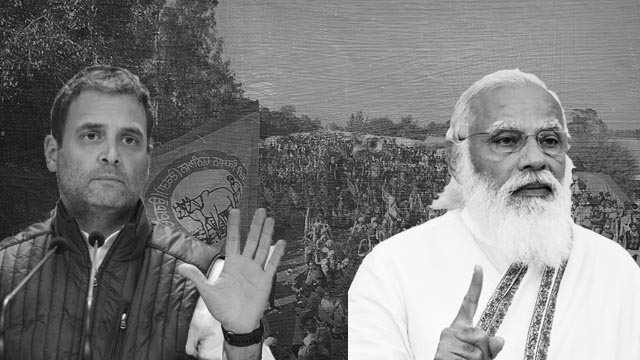 The Trinamool Congress (TMC) also took part in the ‘Kisan Sansad’ agitation, albeit separately. The MPs went to Jantar Mantar in a bus from the Parliament and didn’t participate in the movement to keep it free from political affiliation, rather remained silent onlookers.

“Today all Opposition parties have gathered here to extend their support against the ‘kala kanoon’. We want a discussion on Pegasus, but they are not letting it happen. Narendra Modi has intercepted every Indian’s phone”, Mr Gandhi said. The Pegasus spyware issue has become a bone of contention between Mr Modi’s government and the Opposition.

While it’s a welcome move by the Opposition MPs to visit the farmers’ agitation and show solidarity, questions arise over the choice of timing. Though the farmers’ movement started gathering steam in Punjab, followed by Haryana, in mid-2020, the farmers reached Delhi’s borders, where they were forcefully stopped by the state machinery using macabre atrocities, on November 26th 2020.

Yet, except for the left-leaning farmers’ organisations, none of the Opposition parties took an active part in the movement. The farmers’ leaders have also kept the opportunist politicians out of their movement to ensure non-interference and to thwart attempts to hijack the leadership. Therefore, the Opposition had hitherto limited its role in providing social-media support to the farmers to avoid enraging the ruling Bharatiya Janata Party (BJP).

Congress and other Opposition parties have demanded total repealing of the contentious laws—The Farmers’ Produce Trade and Commerce (Promotion and Facilitation) Act, 2020, The Farmers (Empowerment and Protection) Agreement of Price Assurance and Farm Services Act, 2020, and the Essential Commodities (Amendment) Act, 2020–and a legal guarantee for minimum support price (MSP) for their crops.

Now, when the farmers’ movement reached its eighth month, relying on community mobilisation and village-based support systems, the Opposition leaders are trying to show solidarity, which isn’t asked for. Without their involvement, relying on their own strength, the farmers are already able to pressurise the Modi regime using their clout in Haryana, Punjab and western Uttar Pradesh. A frightened and disarrayed BJP, which miscalculated the farmers’ perseverance and their willpower, is seeking rapprochement to wean away from the majority of farmers using communal polarisation. The renewed unity between Hindu and Muslim Jats in western Uttar Pradesh has panicked the BJP, which had carefully split the community in 2013 using Islamophobic propaganda. It is hysterically opposing the farmers’ movement by deploying all odd choices.

The BJP’s panic is visible from the numerous “Hindu Mahapanchayats” (Hindu conferences) organised in Haryana to stoke Islamophobia and the recent demonstration at Jantar Mantar by Hindutva fascist fanatics baying for the blood of Muslims publicly. So far, the Opposition didn’t mobilise their cadre to resist Narsinghanand and his ilk, showing their tactic support to his feral Hindutva fascist uproars, patronised by the Modi regime.

No Opposition-ruled state has a policy that opposes the neoliberal economic doctrine that has agonised the farmers. The TMC, which used the support extended by Bharatiya Kisan Union (BKU) leader Rakesh Tikait to win the recently-held 2021 West Bengal Assembly elections, didn’t pass any law provide a legal guarantee of MSP to the farmers of the state. Farmers of West Bengal continue to suffer, especially potato and paddy cultivators, as they can’t enjoy the price guarantee offered by the state government.

Apart from West Bengal, the situation of the farmers in Chhattisgarh, Jharkhand, Rajasthan, Tamil Nadu and Telangana didn’t improve a bit. The BJP has blamed the Congress party for conceiving the idea behind the three laws. Mr Gandhi often trolled over a past jibe on reaping profit by selling potatoes to the potato chip makers. It was more than a foolish remark, it was a marketing effort for the erstwhile Congress party-led United Progressive Alliance (UPA) government’s corporate farming agenda that the BJP is now implementing.

The World Trade Organization (WTO) promotes subsidised capitalist farming in western countries. These subsidised capitalist farming products are then exported to Asia-Africa-Latin America, where the respective governments gradually reduce the agriculture subsidies. Facing the stiff challenge, the small and marginal farmers in these semi-feudal economies are ruined by such imports. The WTO’s pressure has allowed the Modi regime to pass the three farm laws, which will benefit foodstuff trading by corporates and import dairy products, posing a big threat to the Indian dairy industry.

In such a situation, none of the Opposition parties has shown any desire to oppose the WTO-framed agriculture policies and they have subscribed to it over the years. When it ruled West Bengal, even the left allowed corporate farming by Pepsico, which stirred massive controversies. Without resisting the WTO’s aggression, how does the Opposition think they can prevent the corporate aggression on farming? In this scenario, can the farmers consider these parties as their allies? Can the farmers allow their movement to be now hijacked by the likes of the Congress party and others who have been following equally obnoxious practices when it comes to corporate control over farming? These questions are quite crucial for the future of the farmers’ movement.