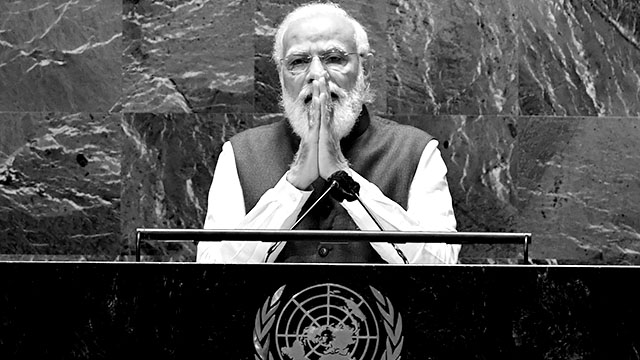 The rhetoric on diverse languages and cultures

Modi referred to “dozens of languages, hundreds of dialects, the difference of lifestyles and cuisines” to underscore the “diversity” of India’s democracy and said, “A little boy who used to help his father sell tea at a railway station is addressing the UNGA as the Prime Minister of India. I will soon have spent 20 years serving citizens of India, first as chief minister of Gujarat and as the prime minister of the last seven years.”

To address the issue of “diversity” in terms of languages, dialects, lifestyles and cuisines, one can refer to the ideology professed by Modi’s Hindutva fascist Bharatiya Janata Party (BJP) and its parental body Rashtriya Swayamsevak Sangh (RSS)– the world’s largest armed, fascist paramilitary organisation.

The RSS draws its ideology from Nazi Germany’s infamous Ein Volk, Ein Reich, Ein Führer (One People, One Empire, One Leader) concept and localised it as Hindi-Hindu-Hindustan, which translates to one language, one religion, one nation-state.

Under Modi, the BJP and the RSS are waging cultural aggression against India’s diverse languages, cultures, lifestyles and, above all, cuisines to establish the hegemony of Hindi language, the northern Indian version of Vaishnava Hindu religion and efface the diverse nationalities that have lived in the country for thousands of years.

Apart from organising major anti-Muslim pogroms, including the infamous Gujarat anti-Muslim pogrom in 2002, Modi’s BJP has been complicit in growing cases of mob lynching of Muslims. Many Muslims have been lynched by the RSS’s cow vigilante militias over the accusation of beef consumption and cow slaughter.

Laws have been passed by successive BJP governments in different states to ban cow slaughter and beef consumption, bringing the state in confrontation with the people’s food choices. Yet, Modi’s UNGA speech shows the audacity to claim that India’s diversity lies in its cuisines!

Mother democracy turned into a fiefdom of tyranny

As a megalomaniac, Modi has a habit of referring to himself in the third person. In psychology, it’s called illeism, which is common among dictators and tyrants. Under such a megalomaniac prime minister, India’s democracy—which never served its poor since the inception but tantalised the middle-class and enriched the rich—wrecked and is disfigured beyond recognition as all arms of the state machinery have professed their loyalty to Modi and his ideology of Hindutva fascism.

The US-based Freedom House’s Freedom in the World 2021 index dropped India’s status from ‘Free’ to ‘Partly Free’. The Freedom House is anything but communist or left-wing. “The government of Prime Minister Narendra Modi and its state-level allies continued to crack down on critics during the year, and their response to COVID-19 included a ham-fisted lockdown that resulted in the dangerous and unplanned displacement of millions of internal migrant workers. The ruling Hindu nationalist movement also encouraged the scapegoating of Muslims, who were disproportionately blamed for the spread of the virus and faced attacks by vigilante mobs,” its report stated.

Europe-based Varieties of Democracy (V-Dem), which is again a non-communist and non-left politically, is claimed to be the largest dataset on democracy with almost 30m data points for 202 countries from 1789 to 2020.

The V-Dem’s latest report on democracy stated that India turned into an “electoral autocracy” with the rise of Modi’s BJP. The report said: “The Indian government rarely, if ever, used to exercise censorship as evidenced by its score of 3.5 out of 4 before Modi became Prime Minister. By 2020, this score is close to 1.5 meaning that censorship efforts are becoming routine and no longer even restricted to sensitive (to the government) issues.”

It also stated how the Modi regime and the BJP have been using the archaic, colonial-era sedition law, the draconian Unlawful Activities (Prevention) Act (UAPA), etc, to silence critics. More than 7,000 sedition cases have been filed against Modi’s and the BJP’s critics since 2014.

The Economist never shied to reveal that it’s right-wing and vigorously promotes ‘free market’, neoliberal economy and the rule of capital. Yet, The Economist’s Economist Intelligence Unit (EIU) didn’t utter kind words for the “mother of all democracies”.

“India’s score fell from a peak of 7.92 in 2014 to 6.61 in 2020 and its global ranking slipped from 27th to 53rd as a result of democratic backsliding under the leadership of Narendra Modi…,” the Democracy Index 2020 published by the EIU claimed. “The increasing influence of religion under the Modi premiership, whose policies have fomented anti-Muslim feeling and religious strife, has damaged the political fabric of the country,” the report also stated.

A crippled press for the megalomaniac’s ego massage

While, technically, the sign of a healthy and vibrant democracy is its obstreperous press that won’t spare anyone, in India, it’s the opposite. In the last few years, hundreds of journalists have been arrested for writing against Modi’s democracy or for exposing crimes of the state.

In the BJP-ruled states like Assam, Haryana, Madhya Pradesh, Manipur, Uttar Pradesh, etc, the journalists come under attack from the ruling party and the police for investigating or reporting facts that cause inconvenience to those perched at the top.

Moreover, most mainstream media outlets are now tamed by the BJP, and they work as Modi’s megaphone. Even Biden, whose administration is using Modi as a pawn, acknowledges this. During meeting with Modi in the Oval Office, Biden said, “The Indian press is much better behaved than the American press. And I think, with your permission, we should not answer questions because they won’t ask any questions on point,” mocking the Indian mainstream press’s servility. No wonder, India’s press freedom ranking is 142, which shows the precarious condition of the press under Modi’s rule.

Eviction and destruction of the environment by “mother of all democracies”

During Modi’s UNGA speech, he claimed that India is building a 450-gigawatt renewable power capacity by 2030. Modi said the country will be turned into a “green hydrogen hub” by that time. His tall claim on climate has no connection with his government’s policies. If one goes by the data, then the Modi regime has been the most environment-hostile government that India ever had.

Since returning to power in 2019 for the second time in a row, Modi started giving away coal mines to his patron Gautam Adani. In 2019, Adani indirectly got the right to destroy 176,000 hectares of pristine forest land to mine coal from 30 blocks. Recently, in April 2021, when India was reeling under a severe oxygen crisis due to the second wave of COVID-19, Adani won the right to develop another big coal mine in central India.

In 2020, when his ambitious-yet-bogus purported Rs 20-trillion-worth “Aatmanirbhar Bharat” scheme was launched, the Modi regime opened the coal sector to private capital. It planned to destroy ancient forests to have 40 coal mines. The coal-driven power generation isn’t going anywhere. Modi solely relies on coal-driven power as it makes his sponsors richer.

Millions have been evicted since India started its reckless drive towards destroying the forests, rivers and villages, inhabited by its tribal people to allow mining by big corporate houses. Under Modi’s predecessor Manmohan Singh, the Indian state launched a large-scale war “Operation Green Hunt” against the tribal people to evict them from their forests, land and turn them into cheap slaves of corporates. Modi has retained the policy and is continuing the war against the tribal people.

What kind of democracy it’s that evicted 70m people under the guise of ‘development’ through mining and destruction of forests? If it’s the mother of all democracies, then why doesn’t it hear the voice of the marginalised tribal people who oppose their forceful eviction? Why it shows hostility to the poor and serve the rich? Is it because it’s not a people’s democracy but a rich, upper-caste Hindu democracy?

Kashmir: the stepson of the “mother of all democracies”

The “mother of all democracies” that Modi’s UNGA speech hailed is infamous for its acts in Kashmir. Jammu & Kashmir, over which Modi’s UNGA speech spent a few seconds, remains the world’s most militarised zone where democratic organs and practices are subject to the military’s diktats.

Over 100,000 people, mostly civilians, have been killed in Jammu & Kashmir since the former princely-state and an UN-recognised disputed territory saw an uprising against India in the 1990s. Under Modi, Kashmir lost its formal autonomy, was annexed into India. Modi jailed its politicians, including pro-India politicians, imposed martial rule, and locked down the valley and its people for 18 months.

Under the pretext of combatting “terrorism”, the Modi government gunned down hundreds of Kashmiris from 2014 to 2021, but the government also admitted that apart from jailing and detaining adults, 144 children were also detained in Kashmir. Modi’s hands are blood-stained in Kashmir and India’s increasing alienation from the Kashmiri people exemplifies the people’s discontent with the BJP’s rule. The “mother of all democracies” has been treating Kashmir as a stepchild since 1947, killing its offspring in galore!

A caste-divided society’s tryst with democracy

When Modi’s UNGA speech bragged on India practising democracy for thousands of years, then it becomes imperative to quote Dr BR Ambedkar, one of the chief architects of the Indian Constitution, who criticised the Indian society as a highly undemocratic one due to the prevalence of the caste system.

Dr Ambedkar, while speaking in the Constituent Assembly on November 4th 1948, said, “Democracy in India is only a top-dressing on an Indian soil which is essentially undemocratic.” The reason behind Dr Ambedkar’s assertion was the dominance of the caste system that stratifies the society and compartmentalises its people in an unjust hierarchy.

For thousands of years, a large section of Indians was kept out of the ambit of education. The caste system doesn’t allow a person to move freely, choose an occupation, marry or get cremated in a place of their choice. The caste system not only exploits the labour of the majority of the lower castes and the ostracised untouchables—called Dalits— but also makes them subservient to the upper castes’ interests.

The RSS wants to turn India into a Hindu Rashtra –a theocratic dictatorship where only the upper-caste Hindus will have the right to rule and make policies, while the lower-caste Hindus and Dalits will be turned into cheap, bonded slaves of the feudal landlords and the big comprador capitalists.

It’s a reason that before Modi, BJP’s Atal Bihari Vajpayee introduced the Citizenship (Amendment) Act, 2003, (CAA 2003), which delegitimised millions of ostracised Dalits, tribal masses, minorities and lower-caste Hindu victims of partition, paving the way for their disenfranchisement through the creation of a National Register of Indian Citizens (NRC).

Assam, which came to the headlines these days due to the state terror unleashed on protesters, had made its NRC that excluded 1.9m people. By planning to disenfranchise millions of people through a nationwide NRC, the Modi regime is planning to make democracy an exclusive privilege of the upper-caste Hindu elites and middle-class, which it always was, in the thousands of years Modi’s UNGA speech mentioned.

Therefore, the democracy that Modi’s UNGA speech claimed is in practice in India for centuries, is the same totalitarian Brahminical dictatorship that’s taking India’s democratic ranking down even according to the most right-wing standards. The Brahminical fascist rule that Modi now wants to impose over India, by discarding the façade of secularism and equality, can be anything but democracy.