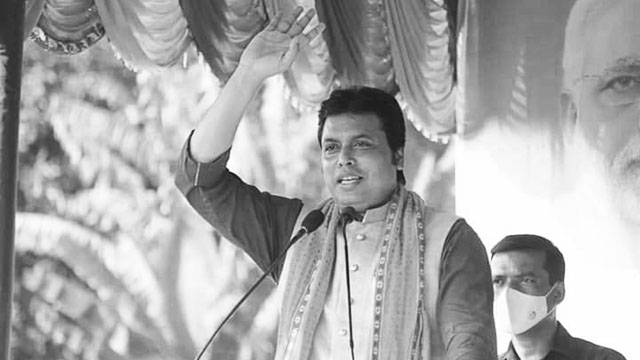 Chief Minister Biplab Deb-led ruling Bharatiya Janata Party (BJP) has managed to sweep the Tripura civic body polls. West Bengal Chief Minister Mamata Bandopadhyay’s Trinamool Congress (TMC), which recently forayed into the northeastern state and locked horns with the BJP, managed the second position in the Agartala Municipal Corporation (AMC), relegating the Communist Party of India (Marxist) [CPI(M)]-led Left Front, which earlier ruled the state, to the third position. However, the BJP’s victory in the Tripura civic body polls remains marred in controversy as its opponents have been accusing it of using violence to intimidate people and rigging.

After a series of setbacks in provincial elections and bypolls in different states, the BJP’s clean sweep in the Tripura civic body polls brought a wave of jubilation in the saffron camp. The happiness was exhibited by none other than Prime Minister Narendra Modi, who congratulated the BJP and Deb for winning something as banal as a civic body election. However, winning Tripura civic polls was important for the BJP as its parental body Rashtriya Swayamsevak Sangh (RSS) has been carrying out an obnoxious “social engineering” experiment in the state by luring the indigenous tribes into the Brahminical Hindu fold.

For weeks, the TMC and the CPI(M) have been alleging that the BJP had been using violence to intimidate the Opposition and the voters. The TMC, which started an aggressive campaign against Deb’s rule, alleged that its workers had been attacked by the BJP’s goons. The TMC’s youth wing leader Sayani Ghosh, a famous actor from West Bengal, was even arrested on fabricated charges. The CPI(M), a staunch opponent of the TMC in West Bengal, also opposed the state repression of the TMC workers and leaders in Tripura. However, the Left Front and the TMC didn’t ally.

Both CPI(M) and the TMC remained mute spectators when the VHP, Bajrang Dal and HJM were carrying out large-scale anti-Muslim violence in the state to ensure that their Hindu vote bank isn’t affected. As Muslims constitute around 9% of the state’s population, the community is considered expendable by political parties of all orientations in Tripura. When Deb’s government cracked the whip on activists and journalists who exposed the communal violence and busted the Tripura Police’s claim that “all is well” in the state, neither the CPI(M) nor the TMC upped their ante but merely resorted to rhetoric mongering.

The results of the Tripura civic body polls showed that the TMC, which suddenly became hyperactive in the state’s politics, became the principal opponent to the BJP, replacing the ailing CPI(M), at different places. However, the splitting of the anti-BJP votes among the CPI(M)-led Left Front, the Congress party and the TMC, provided a cakewalk to the ruling party. The TMC’s entry into the electoral battle in Tripura has proved fatal for the Opposition, especially the CPI(M)-led Left Front. But the TMC couldn’t gain anything materially substantial from the Tripura civic body polls due to its hollow anti-fascist credentials.

TMC leaders like Kunal Ghosh and Rajib Bhattacharya have claimed that getting 20% votes in the maiden elections and making inroads into Tripura are promising achievements for the Party. The TMC had less than 1% of the vote share in the 2018 assembly elections. Ghosh and Banerjee asserted that the TMC will fare well in the Tripura Assembly elections scheduled in 2023. Left Front convener Narayan Kar called the Tripura civic body polls a “mockery” and vowed to continue to fight for the restoration of democracy and people’s voting rights in the state but remained non-committal regarding an alliance with the TMC.

The TMC, which has reinvigorated itself in West Bengal after defeating the BJP in the last assembly elections, has been on a national expansion spree. The TMC has entered BJP-ruled states like Goa and Tripura, asserting that it will become the sole opponent of the saffron party in these states. However, the experience of the Tripura civic body polls proved that rather than defeating the BJP, the TMC is simply helping it win by dividing the opposition votes. It’s also averse to forming alliances, which is helping the BJP. Who has benefitted from the TMC’s hyper-active expansion spree in Tripura?

The Tripura civic body polls showed that the current opposition parties and their lacklustre attitude can’t stop the saffron juggernaut. Political parties like the TMC, the CPI(M), and Congress neither have the intention nor the organisational capacity to defeat the BJP. They are enabling and empowering the Hindutva fascist brigade. It’s imperative for the political forces that are seriously contemplating defeating the BJP and the RSS that they innovate new ways to achieve their goal. Unless the present stalemate is ended, unless a realistic people’s alternative is developed, there can be no political progress in the anti-fascistic political struggle.