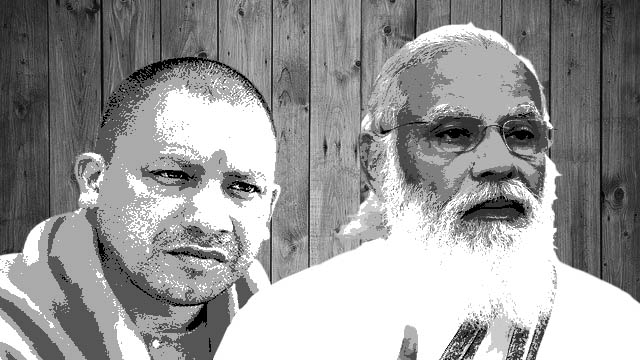 With Uttar Pradesh Assembly elections knocking on the door, Prime Minister Narendra Modi and his Bharatiya Janata Party (BJP) have been resorting to unapologetic communal rhetoric to stimulate the majority Hindu community of the state. Recently, Modi praised Chief Minister Yogi Adityanath, a rabble-rouser monk, by claiming that UP (Uttar Pradesh) + Yogi is equal to Upyogi (useful in Hindi). Modi’s Upyogi certification is another frantic bid by the prime minister to endorse the chief minister’s unconstitutional acts and communal politics.

While laying the foundation of the Ganga Expressway in Shahjahanpur on Saturday, December 18th 2021, Modi said that the people of Uttar Pradesh are saying “UP plus Yogi, Bahut Hain Upyogi (Uttar Pradesh plus Yogi is very much useful). Modi heaped praises on Yogi for his government’s extrajudicial act of razing the properties of suspected criminals in the state.

“When the bulldozer runs over the mafia…the bulldozer runs over the illegal building but the person who is nurturing it feels the pain”, Modi said, referring to the Yogi government’s diktat of razing down the properties of people accused of crimes. The razing down exercise gained popularity when the Yogi regime used bulldozers to demolish the property of a mafia kingpin, Vikas Dubey, who was later killed in an alleged “encounter” after he surrendered to the police.

The Uttar Pradesh Police’s September 2021 data showed that since 2017, more than 150 alleged criminals were killed and over 2,800 were injured in “encounters”. More than 3,700 people have been arrested under the Gangster Act, while 550 have been prosecuted under the stringent National Security Act (NSA).

Apart from this, Uttar Pradesh is also at the top among Indian states in booking critics of the BJP under the draconian Unlawful Activities (Prevention) Act (UAPA) and under the colonial-era sedition law. Journalists like Siddique Kappan are rotting in jail for simply trying to report a heinous crime like the Hathras gangrape and murder of a teenager.

Properties of accused criminals worth Rs 18 bn have been razed by the police in Uttar Pradesh since 2017. The police specifically named the criminals from the Muslim community like Mukhtar Ansari and Atiq Ahmad, as those who have been tamed, while showcasing their achievements.

Moreover, after the December 2019 protests against Modi’s contentious citizenship laws turned violent in different parts of Uttar Pradesh, and alleged acts of vandalism were committed during the police’s clash with the protesters, over 300 people were served notices by the police to cough up penalties for the alleged damages caused to public properties during the protests.

The police cited a 2010 high court order that allowed the state government to recover losses to public property caused during violent agitations from those who were involved in it. The Supreme Court later issued a stay order to prevent the government from seeking a penalty worth Rs 5m from 130 accused.

However noble may the intentions of the Yogi regime appear behind penalising protesters or demolishing the properties of a crime accused, the important question is–who holds the power to convict an accused? Can the police declare an accused a convict and give out punishment on its own? Can the government declare people criminal using its executive powers?

India’s criminal laws, Code of Criminal Procedure (CrPC), 1973, and the Indian Penal Code, 1860, allow the government to arrest the accused and present them to a court of law, where the quantum of the punishment for the crimes committed are decided by judges after such crimes are proved by the prosecution using evidence and eyewitness statements.

Only the judiciary, which is supposed to be an autonomous pillar, free from executive and legislative influences, is allowed to convict accused and deliver justice. The executive or the legislative wings of the state can’t prosecute someone or deliver verdicts. However, the Yogi regime has been violating these basic precincts and is running a kangaroo justice system based on communal and caste biases as well as whimsical fancies of the bureaucrats and legislators belonging to the BJP.

Though the government—through its executive powers—can demolish any property or structure that has encroached upon public land, or is constructed illegally, or penalise people for not following a law, it must follow the due course of law while doing so. But the government can’t convict someone of crimes based on police records. It’s the domain of the judiciary. It must get judicial backing to take any punitive action against an accused.

Now, in the BJP’s laboratory state of Uttar Pradesh, the legal procedures are laid to rest, as Yogi has become the prosecutor, judge and executioner, all by himself. Exploiting the people’s angst regarding the slow judicial processes and loopholes that criminals utilise to remain aloof from the law, Yogi is running an extra-judicial system, where the police can shoot anyone and call it an “encounter” and where the properties belonging to anyone accused of any crime can be razed overnight.

Still, it’s unsurprising to see the prime minister, who holds a constitutional position and has taken the oath to protect the Constitution of India and its laws, endorse such acts of mob justice. By resorting to communal rhetoric mongering and by peddling lies, Modi has already shown that he cares a lemon about the rule of law. It’s only by breaching laws, by promoting bigotry and divisiveness, he can consolidate his rule.

While such extra-judicial acts by an elected government can appeal to the masses, in the long run, they pave the way to mob vigilantism and lynching, which are in galore in Uttar Pradesh. Moreover, Yogi’s extra-judicial “crime management” skills are limited only to such criminals who are associated with the Opposition. In the case of the criminals in the BJP’s ranks, no punitive actions are taken at all.

In Uttar Pradesh’s Lakhimpur Kheri, four farmers were massacred and eight others were injured, when they were mowed down by a vehicle allegedly belonging to Ashish Mishra, the son of Ajay Mishra “Teni”, the Union minister of state for home affairs. What factors helped Ashish to commit such a heinous crime with sheer impunity? Of course, it’s his father’s position in the BJP, which immunises his properties from being razed by the Upyogi chief minister.

Ashish was later arrested, after a lot of fuss, and even when a special investigative team (SIT) investigation reported that the massacre was pre-planned, the Yogi regime didn’t take any punitive action against Teni’s properties. The Modi regime is still analysing the cost of firing Teni from the cabinet. Teni, on the other hand, has been found attending government programmes in Uttar Pradesh with sheer compunction, abusing reporters who ask questions on Ashish.

Apart from patronising the BJP-affiliated mafia, cow vigilantes and communal riot mongers, the Yogi-led government has also turned the state into a nightmare for women. Though Modi, following the cue of his lieutenant and Union Home Minister Amit Shah, claimed that the women of Uttar Pradesh are safe under the Upyogi chief minister, he deliberately concealed the fact that the state ranks top in India when it comes to crime against women.

When Modi claimed that the mafia and the criminals are having sleepless nights in Uttar Pradesh under the Upyogi chief minister, he meant that those in the Opposition camp with criminal antecedents are harassed, while those in the BJP are having peaceful sleep as well.

Those without criminal antecedents are intimidated by the Income Tax (I-T), the Enforcement Directorate (ED), the Central Bureau of Investigation (CBI) and other bodies that work as appendages of the Modi regime these days. The I-T has raided the houses of Samajwadi Party leaders while Modi was lambasting the Opposition. The ED and the CBI have been after several Opposition politicians as well.

Modi’s frantic bid to portray Yogi as Upyogi and his continuous resorting to communal jibes exhibit how the Party is devoid of any serious achievement in the most populous state that sends 80 members to the Parliament. Modi and Yogi’s euphoria of development, jobs and economic upliftment are mere rhetoric that the poor won’t buy.

Growing unemployment, rising inflation, mounting sugarcane dues, falling prices of crops and the crippling of the small and medium-scale industries in the last few years due to Modi’s disastrous corporate-friendly policies, have pushed the common people to an abyss of sheer crisis. The BJP didn’t address these issues but remained focused on creating optics, using religion, to ensure that the masses remain inebriated and support it in one after another election.

When Modi dipped in the river Ganga at Varanasi in an apparent bid to mesmerise his Hindu vote bank, people remembered how thousands of shrouded corpses were floating in the river throughout the state during the second wave of the COVID-19 pandemic in April-May 2021. They also know how polluted the river has become under Modi.

The people also remember how cremation grounds were filled with corpses of those victims who didn’t get oxygen or treatment at the hospitals during the second wave. Several bodies remain buried at the banks of the Ganges. The Uttar Pradesh Government denied that there were any COVID-19 deaths due to lack of oxygen.

Modi has been trying hard to obfuscate the inconvenient facts by heaping praises on Yogi, the Upyogi one according to him, to ensure that the BJP manages to win a landslide victory in the state and secure its return in 2024. Even though a lack of a credible and resilient Opposition has helped the BJP with competitive leverage so far, the Party is aware of the growing discontent among the masses in the state.

Now what remains to be seen is whether the BJP manages to befool the Hindus once more in 2022, using communalism, extra-judicial vigilantism and by peddling lies, or whether it suffers a humiliating defeat in the very state that has been its laboratory for ages. Whether Yogi is Upyogi in helping Modi and the BJP win elections will be seen in March 2022. Until then the motormouth will not cease blabbering about the perceived successes of the Upyogi.