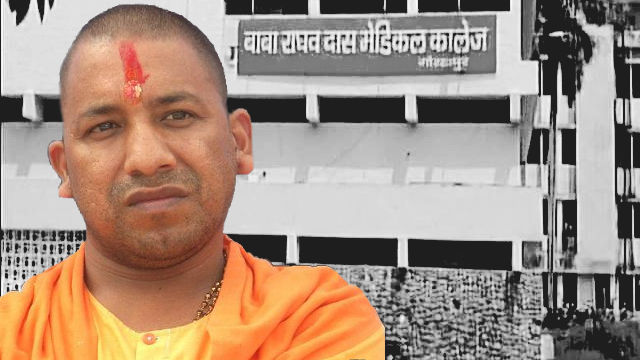 Death of 30 children within 48 hours in BRD Hospital, the largest state-run hospital in Gorakhpur, can be called nothing less than a systematic murder because the BRD Hospital administration and the Health Department of the Uttar Pradesh government deliberately showed a lacklustre attitude in paying back the dues to the oxygen supplier, who withdrew supplies due to the nonpayment of ₹70 lakhs of outstanding amount.

Should the Yogi Adityanath government felt that it has an obligation towards saving the lives of the ailing children and other patients of the hospital, it would have been working extensively towards resolving the issue of oxygen supply and ensured that no deaths have happened due to the non-supply of liquid oxygen.

Baba Raghav Das Medical College and Hospital is one of the biggest hospitals in East Uttar Pradesh and is now considered as a very important one because it is situated in the constituency of the chief minister of the state and serves a radius of 300 km, where mostly the poorest of the poor people of Uttar Pradesh, Bihar and Nepal lives.

Yogi Adityanath himself toured the hospital on 9 August, the day nine children died due to encephalitis, probably due to shortage of oxygen and therefore, it can be ascertained that the state government was fully aware of the conditions prevailing in the hospital but still did nothing to resolve the outstanding dues of the vendors, which led to the supply cut.

It’s reported that more than 63 deaths have been reported in the past five days due to the lack of oxygen, however, the self-styled “patriotic” government, with a communal bigot and hate monger at its helm, refused to take any step towards meeting the gap and saving the lives of the poor, especially the children, who became victim of the man-made crisis.

Reports like these state that Gorakhpur is in the grip of encephalitis since 1978 and more than 25,000 children died due to this disease, according to official figures. Since 2012, 3000 children died and between January to September 2016, 224 children died, in the BRD Medical College and Hospital and the death toll is still on the rise, unchecked.

The failures of the past governments and the present government cannot be alienated from each other, especially because Yogi Adityanath and his predecessor Mahant Avaidyanath remained the MP of the Gorakhpur constituency and headed the influential Gorakhnath Mutt for three decades. Their combined rule kept the town under the grip of the BJP and their diktats have been the rule of the land since time immemorial. Hence, the performance of the hospital and the crisis that it faced were known to the present Chief Minister, but he remained indifferent to resolve issues regarding the supply of basic amenities like oxygen to the hospital.

Nobel laureate Kailash Satyarthi called this death of 30 children a sheer massacre, such massacres cannot be allowed and the perpetrators must be booked to be punished by the law; if only we were living in a democracy where rule of law and not the sword and whim of the rich, powerful and the utmost corrupt ruled.

To hide its crimes, the government of Uttar Pradesh and the BRD Hospital authorities didn’t conduct any post-mortem on the bodies of the deceased children, as Health Minister Siddharth Nath Singh said that the children died due to their illness, i.e. encephalitis, thus no postmortem was required. There is a news that amidst the Congress and Samajwadi Party’s demand for ₹20 lakh compensation to each of the families, the Yogi Adityanath government is seeking a path of closing the case and the subsequent Pandora’s box by providing some financial compensation to few of the families to gag them forever from complaining.

A troll army is deployed by the RSS leadership to blame the opposition of purportedly “hatching a conspiracy to tarnish the image of the Yogi Adityanath and his government” throughout the country. Moreover, the government is taking no chance to discard the claims that it has deliberately not paid the bills to the oxygen vendors and accumulated an unpaid amount of ₹70 lakhs, it’s amplifying its claim that the children died due to encephalitis, even when all evidence and facts are claiming otherwise.

There are reports that the Gorakhpur administration has deployed a large contingent of the armed police force and RSS men to thwart any protest attempt by the bereaved family members of the dead children. The entire corporate media discourse was diverted towards discussion of why the Madrassas should record videos of their Independence Day celebration to prove the loyalty of the Muslims towards India. This communal propaganda is given a strong thrust by the lackey journalists of the Sangh Parivar to overlap the news of utmost failure of the Yogi Adityanath government, the poster Hindutva government of the RSS in India’s largest state, so that the entire discourse can be diverted and the BJP can be saved from the humiliation it’s facing.

Following the diktat of their corporate headquarters, one of the lapdog TV anchors of the Hindutva camp silenced one of the panellists who questioned the BJP government over the death of 30 children within 48 hours by calling it a “non-issue” and only “Vande Mataram” as an issue that worths a discussion. The sudden urge by the major corporate media organisations to censor the news and the RSS’ attempt to curb the criticism over social-media by unleashing its troll army shows the desperation of the Hindutva camp to bury the issue by inciting jingoism.

Within 48 hours, Narendra Modi will deliver a 45-minute-long lecture from the podium of Red Fort and he will, of course, talk about making India a powerful country and pat his own back to showcase his government as the harbinger of change through the path of the neo-liberal economy that was unlocked by the Congress Party.

However, neither Narendra Modi nor his coterie will admit that over years the Indian government has deliberately reduced investment in public health and has transferred healthcare sector of the country to the big corporate houses, who are monopolising on health care as well as pharmaceutical and wellness industry to exploit more profit from the agony of the people.

While India spent 0.22 percent of its GDP in the health sector during 1950-51, the allotment increased only to little over 1 percent of the GDP in 2016-17, according to this report from Times of India, which still keeps the spending far below the world average of 5.99 percent. The government’s health policy, according to a report in The Hindu is trying to plan a spending of 2.5 percent of the GDP in health sector in the forthcoming decade or so, with maximum emphasis given to “strategic purchasing from the private sector and leveraging their strengths to achieve national health goals”, the newspaper quoted JP Nadda, the health minister of Modi’s cabinet.

This emphasis on helping the private healthcare sector grow, while the public healthcare sector is transformed from a service-oriented industry to a profit-oriented, corporate industry, shows that the growing lifestyle imbalance and environmental change fuelled diseases and the subsequent agony of the people will be utilised by the Modi government and its masters, the foreign corporations, their Indian crony agent capitalists, to milk profit and fill their coffers.

The Modi government has, in a very subtle manner, dodged the demand of a large number of health activists to include the right to health as a fundamental right. The Modi government, rather, included the concept of promotion of “wellness”, which is a corporate-designed strategy to replace the long-standing demand of the democratic forces for a universal pro-active healthcare service to the broad masses, especially those who are poor and belong to marginal communities.

The concept of “wellness” actually promotes the use of supplements, mostly chemically processed or manufactured following obscure practices to increase profit margins for the corporate houses. This very “wellness” industry also feeds the rapidly growing Yoga industry and “patriotic FMCG” industry like Patanjali, which promises overall wellness with a vague definition of the term and emphasise more on its chauvinistic marketing strategy.

There is a dire need for increasing the spending on health, which should be at least 3.5 percent by 2020 to meet the rapidly changing climate and health conditions. The number of life-threatening diseases are on the rise and the pattern of most of the diseases are undergoing severe changes.

To ensure that the private industry, the corporate giants cannot derive any unethical mileage from the crisis to fill their coffer with huge profits, there is an urgent need to revamp the public health services and make them most proactive in reaching the people who are prone to any type of diseases and provide them with a strong shield of immunity that can be backed by extensive research and development in the pharmaceutical industry if it has a greater public sector participation.

The overall improvement in the health of the nation will happen proportionately, as much as the state will be willing to spend to ensure that universal health care services are available to all sections of the society, especially the poor and the marginalised people and as much as the corporate sector’s role can be restricted and eradicated.

Incidents like the deliberate killing of 30 children through negligence in BRD Hospital of Gorakhpur are done with a motive to make the private health care industry make a fortune out of the plight of the poor and marginalised people, who would now be forced to sell their belongings, mortgage their land to pay for the treatment of their beloved one in private hospitals that will charge a fortune to promise no death will happen due to shortage of oxygen cylinders.

The demand of the Congress and the Samajwadi Party of ₹20 lakh compensation to the families of the dead children is another farce and a very strange demand at a very hour of crisis. No money can fill the void and heal the emotional trauma that a family undergoes after losing a loved one. All they want is justice and that very justice can be done if the real perpetrators of the crime, from the topmost level of the chain of command, can be prosecuted for a massacre and can be punished by the law.

Unfortunately for the people of India, and fortunately for the perpetrators of the crime, the killers of these 30 children who died in the BRD Hospital of Gorakhpur will remain aloof from the law, because they are the powerful people and they make the law work according to their whim. These deaths, even of the most innocent children, will pile up as mere numbers in the government logbooks, while the murderers will make money, immense money and ensure their own healthcare in the best foreign hospitals. The normal course of life in a profit-driven society and it will continue until there’s an attempt taken to change the whole system indeed.