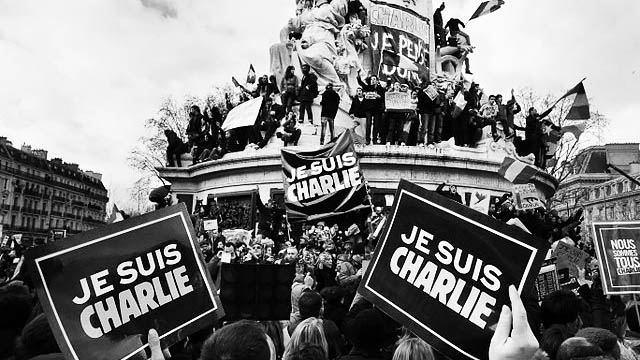 Did the Charlie Hebdo Cartoonists ever draw French President Emmanuel Macron eating up people’s food? Why didn’t their art depict the French state’s oppression on the poor and downtrodden masses? Why didn’t they show how the French ruling classes have ghettoised France according to racial blocks?

We learnt art. Yes, fine arts. Thus we exercised an inbuilt visual reading of any form of art. What was Mohammad’s cartoon by a teacher later beheaded? It is, in French, “Degueulasse“, ie, disgusting.

Why is this cartoon disgusting? Because it didn’t bear any wit. Any sharp lines or forms. Zero intelligence, only propaganda against Islam practitioners. It was like a cartoon for an attack’s sake. Exactly like art for art’s sake. Voila!

On the other hand, Charlie Hebdo has been a popular French weekly which has been attacking Muslims since long like an obedient routine. A cartoon is a very strong form of art. The moment a caricature is done the political play starts in it. Mostly “established” power-people are the focal points of an entire narrative of a caricature. Be it a religious fundamentalist or a hardcore communist.

We may say it’s like an agitation propaganda tool. But the fundamental of a caricature is wit. What significant crime, oppression or heinous act the main character has committed? How he snatched the clothes of the poor and wore gold chains, ate on silver plates? How many nuclear bombs has he stored or how many missiles has he sent to the oil-mineral rich countries?

Samuel Paty, the teacher-cum-cartoonist of Prophet Muhammad was beheaded in France. The assailant was later gunned down by the French state. Well, now that it’s in the news that the assailant may be of Chechen origin, the brows even came closer.

This is quite interesting that the French cartoonists could draw Muhammad sitting in a bloody bathtub reading his own story written “Je Suis Charlie” ( I am Charlie) but forgot to notice how during the Macron regime people have been suffering massive layoffs. It missed the “Yellow Vest Protests”, which went from November 2018, right till the onset of the COVID-19 restrictions. Did the artists ever draw the French dictators who killed 1.5m Algerians during the latter’s liberation struggle? How come this organised genocide was dodged off to the French (cartoonist) haters?

The real democratic and progressive people don’t abide by religion. They have been strongly criticising repression and hypocrisy in religion. But to attack people for their religious identity is essentially fascist. Exactly like attacking people for their gender, racial and caste identity.

To create Islamophobia is a part of a neo-liberal economic order’s game. So that the big capitalists in western “civilised” countries may capture all oil and minerals beneath the feet of Muslims. Then oust them from their motherlands. Like, they plan an act which at first nastily attacks a religion or practitioner instead of criticising it then “make” killers out of them. So that with the help of the World Bank, International Monetary Fund and other neo-liberal power blocs, the right-wing fascists can capture their territories using missiles and bombs bought with the people’s tax money, while those very people die without getting proper treatment, on the streets of the US, the temple of “democracy” and “freedom” for slave owners and their loyal slaves.

Interesting to see French people’s insecurity formed by state machinery as they protested this beheading. Why none of the posters said, “religion is repressive but to defame someone for their practice is equally repressive”? Why did no poster come up saying “we criticise all religion” or “Macron est un monstre”? Why only Muhammad has been depicted baselessly? Just to deepen the propaganda against people who have resources beneath their feet?

The French “secular” hypocrites have no answer to these questions. They wouldn’t fight against Macron when his state was suppressing workers fighting on the streets. They won’t question the very imperialist policies of Paris that kill Muslims in the Middle East and Africa, forcing millions to seek asylum in Europe, the colonisers’ home turf. They need to vilify the Muslims and their religion, as it’s by demonising the community the engine of imperialist loot and plunder will perform efficiently in oil and mineral-rich Muslim lands.