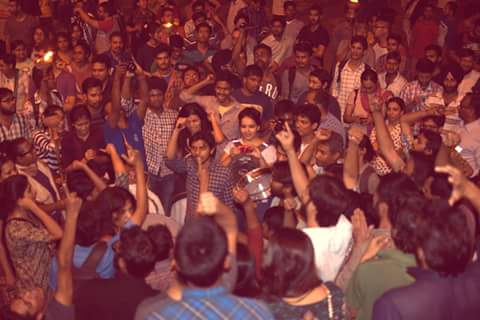 After the JNU incident, political trends of a lot of individuals and parties involved in the case has changed since the release of Umar Khalid, Anirban Bhattacharya and Kanhaiya Kumar, but the repressive nature of the state has remained unchanged. Now they have used JNU administration to ‘punish the revolting students’ by imposing fines and expulsion orders. They have chosen a perfect time, as AISA activist Anant Prakash reported, choosing the perfect time when there are university exams and as a result, there will be no mass student mobilisation. On the one hand, the fascist state machinery in nexus with the administration is wreaking havoc upon the students and on the other hand,  in Delhi University,  the Hindutva fascist student group ABVP in nexus with the Ram Lal College administration is continually harassing Prof. Dr G.N. Saibaba, who was recently granted bail, calling him a ‘Maoist, terrorist and an anti-national’. They confronted the disabled Professor and assaulted the common students who protested against the disruption of the democratic space of college by this act of sheer hooliganism.

Coming back to the JNU incident, Kanhaiya Kumar is fined Rs. 10,000; Umar Khalid is fined Rs. 20,000 and suspended from campus for one semester and Anirban Bhattacharya rusticated from campus till July 15, given the time of 15 July to 25 July to complete his doctoral thesis, and then barred from the campus for five years. A Kashmiri student Mujeeb Gattu is also rusticated from the university, Ashutosh Kumar is removed from the hostel along with the imposition of fine. Other JNU student leaders are also punished with a fine of Rs. 20,000 each. Similar actions have also been taken on other students. Also, the Jt. Secretary of JNUSU is  fined Rs. 10,000, which shows that the state is trying to antagonise the entire JNUSU as it has dared to raise its voice against the Modi regime in the form of #OccupyUGC movement.

All the students, including ABVP member and JNUSU Jt. Secretary Saurabh Sharma have raised questions on the authority of the committee. President Kanhaiya, Vice-president Shehla Rashid and Secretary Rama Naga held a press conference in JNU where they raised issues about the committee, demanded the revocation of all penalties and burned the committee report as an act of protest. They have further decided to begin a series of hunger strikes. Hunger strikes are possibly the best way to get media attention and also force the JNU administration to crack down. Some of the students that have been fined, especially from All India Students’ Association come from rural lower middle-class backgrounds such as AISA activists Chintoo, Ashutosh and Rama Naga.

Kanhaiya is representing the entire parliamentary Left, and Right-wing Congress as well. It so happens that as the president of JNUSU, he represents the institution too. So, there is much pressure on Kanhaiya to play the part of the student leader in a movement which is again directed by the state.

As the JNU student leaders geared up for integrating with other student struggles, particularly the struggle against Vice-Chancellor Appa Rao, they were immediately slapped with penalties by the JNU administration. This shows us two things; one is the fascist nature of the Modi regime, which works against the common students and their peaceful struggle for basic rights. Two, that there has to be politics outside the university as well, since political activity in the university space is liable to such crackdowns but by integrating student’s movements with the militant movements of workers and peasants, and primarily by doing political work among them. The campus is only to be seen as the recruitment ground for the political worker who actually wishes to do more than bourgeois politics.

Speaking of bourgeois politics, Congress has not cringed even a little to make him their youth leader, which is evident by the fact that Kanhaiya, extending their support in one event after another, in order to lure him into Congress leadership, which can be thought of, as the history of alliances between CPI and Congress go way back.

Meanwhile, the faction that broke away from Democratic Students’ Union and consisted of Anirban and Umar, took a different turn. Their activism has been more intellectual and not much practical. Rumours have it that they will use the current swing of the wind in their favour to unite with the three other union officials and form a JNU Joint Action Committee bypassing the original Joint Action Committee for Social Justice which was formed during the #Occupy UGC movement.  One thing is sure for now, that universities from DU, JNU,HCU and FTII have become hotbeds of repression and resistance by the common students. The question however remains whether these struggles will actually do the work of making the student community conscious about the larger fascist onslaught upon the oppressed sections of societies like the Kashmiris, or the workers and peasants of the country and whether this will give the students ample opportunity to integrate with working-class politics and the politics of revolution.

Contributor on issues pertaining to campus life and more