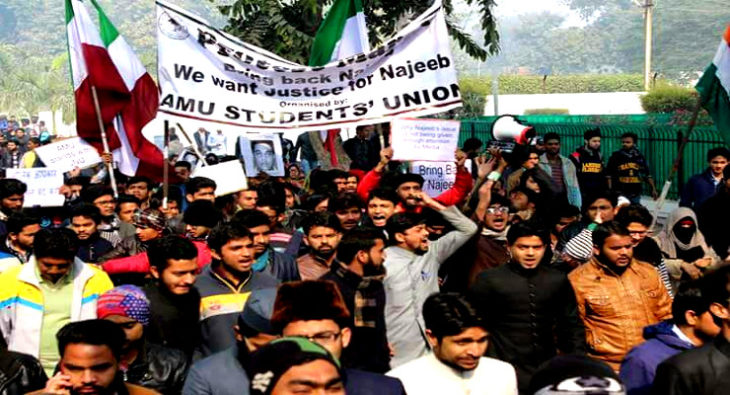 When Narendra Modi declared his war on black money by demonetising the notes of Rs.500 and Rs.1000 on 8th November 2016, he actually wrecked a havoc on the country, which not only created a major turbulence in the economy of the country but also swept many burning issues under the carpet; one of the major issues was the mysterious “disappearance” of the JNU student Najeeb Ahmed from his hostel in New Delhi since 15th October 2016.

While Najeeb was allegedly abducted from his hostel room by the hooligans of ABVP under the supervision of several Hindutva thugs, who thrashed the young student of MSc Biotechnology in the hostel and abused his religious identity on the night of 14th October, the Delhi Police under the Home Ministry of the Modi government kept denying that a crime was committed and refused to investigate the issue despite an FIR being lodged in the Vasant Kunj police station.

On the other hand when the mother of the missing JNU student Najeeb, Fatima Nafees, came on the streets along with the students of the JNU and other civil society members demanding a proper investigation of the incident, the Delhi Police, which is infamous for its absolute subordination to the RSS-both organisationally and ideologically – came down heavily upon the protesters and brutally thrashed them.

Fatima was beaten and dragged by the police on the streets of New Delhi displaying the respect of a mother in the Hindutva state that is making worship of “mother India” mandatory for everyone.

When Narendra Modi was cornered by the Kashmir crisis and the militant attack on the Una army base, we heard the tale of a purported “surgical strike” against Pakistan funded terrorists “along the LOC” by Modi government; no evidence was ever produced and the people were asked to believe the government’s claim wholeheartedly to show their spirit of “patriotism”.

Questioning the government narrative is automatically labelled as “anti-national” activity by the Modi dispensation and invites the ire of the saffron bloc and its “fringe” supporters.

Very soon, when we saw the country and its critical voices questioning the narratives of the Modi government and its sycophants on the “surgical strike”, its conspicuous silence on the abduction of JNU student Najeeb by the ABVP, and the brutal police repression laden on the students demanding proper investigation of the incident, the Modi government went on a rhetoric centred war on black money through a ill-planned demonetisation exercise, which soon became the focal theme of all public discourses.

When the Modi government started the hullabaloo of demonetisation, the strange police apathy in the national capital on the incident of a student getting abducted from a central university was thrown to the back burner. The demonetisation exercise and its repercussions affected all sections of the society sans the real black money hoarders and the public discourse got centred around the merits and demerits of what was called “Modi’s surgical strike on black money” by the RSS activists.

Despite the sudden surge of mass movements against demonetisation and the public mood centring around the insecure future of a cashless economy, there were several attempts made by student activists throughout the country to raise the demand of finding Najeeb.

From Jadavpur University in Kolkata to the University of Hyderabad, from Pune to Jamia Millia Islamia University in Delhi, the students relentlessly raised the demand to find Najeeb and punish the ABVP culprits.

Apart from the official left student associations like the SFI or the AISA, a lot of student organisations affiliated with different shades and hues of politics, campaigned throughout the country demanding the Delhi Police to act and fulfil its constitutional obligations.

A massive rally of students in Aligarh Muslim University in the month of December was brutally thrashed by the police of the Samajwadi Party’s government led by Akhilesh Yadav.

The students of the Aligarh Muslim University were beaten on the roads near the State Bank in Lal Diggi area, which resulted in several students getting injured and the act itself showed once again how the Uttar Pradesh government of Akhilesh Yadav’s Samajwadi Party is hand-in-gloves with the Modi government and how it wants to suppress all signs of dissent against the fascist Hindutva regime.

While speaking to the People’s Review, Mazin Husain Zaidi, the ex-Vice President of the Aligarh Muslim University Students Union, claimed that the government of India is turning hostile to the youth, who form the majority in the country.

He said that it’s unfortunate that a student of a central university of the country can simply “disappear” from its hostel and the government along with its law enforcing agencies is not doing anything to trace him and demanded that the government, irrespective of its ideological orientation, should fulfil its constitutional obligation and must expedite the process to find the missing JNU student Najeeb Ahmed.

Najeeb was not forgotten, we saw slogans written on currency notes calling “Where is Najeeb?” in all languages and demands like “Find Najeeb” in the posters. All political forces that are in opposition took up the issue and carried out agitation repeatedly, however, the Modi government took no interest in listening to the mass agony.

Probably the Muslim identity of Najeeb made him an “expendable” piece in Modi-fied India, where the Hindu Hruday Samrat, or the emperor, is busy preparing a large-scale genocide plan for the marginalised minority community once the new dispensation of Donald Trump takes over the reins from Obama administration in the US.

It’s quite disturbing to see the grotesque face of the Hindutva state and its jingoistic fervour, with which it incites a feral mob against those who raise valid questions or dare to dissent, fully subverting the democratic and constitutional norms.

JNU student Najeeb was not a political foe of the RSS student wing ABVP, he was still targeted and abducted (or probably killed!) by the thugs of the saffron brigade because he was a Muslim.
From Muzaffarnagar, Dadri, to JNU, the RSS and its puppet government is carrying out a vendetta regime against the Muslim community. Because he was a JNU student, Najeeb got the highlight of the media and the civil society, it is quite frightening to imagine the fate of minority and marginalised victims of similar incidents in the hinterland of the country, far away from the range of mainstream media lenses. JNU student Najeeb Ahmed is missing, so is justice and rule of law in Modi-fied India.