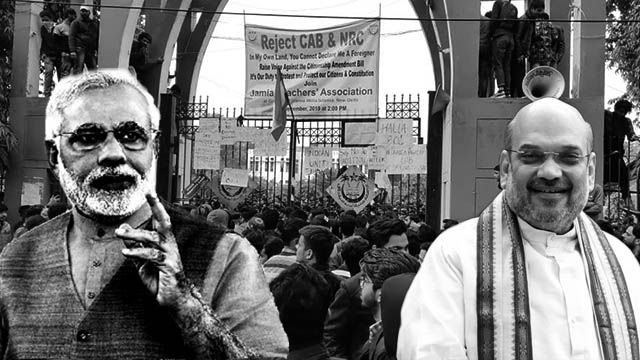 After a massive rally of Jamia Millia Islamia students, teachers and local Muslim residents of Jamia Nagar, against the contentious Citizenship Amendment Act, was stopped by the Modi regime’s servile Delhi Police, violence sparked in New Friends Colony area of South Delhi. In videos and photographs, it was found that the Delhi Police was setting buses parked on the road on fire and then smashing two-wheelers parked on the Okhla Road, to blame the Jamia Millia Islamia students for the arson. The ruling Aam Aadmi Party (AAP) blamed Modi’s Bharatiya Janata Party (BJP) of appropriating the plot to create Islamophobic narrative and using the Delhi Police to set buses on fire so that the optics can be used in the forthcoming Delhi Assembly elections.

Using the Islamophobic optics created by the Delhi Police and Rashtriya Swayamsevak Sangh’s (RSS) thugs, who jointly beat up the protesters, the mainstream press and Modi’s bootlicker media managers started amplifying a narrative that the Muslim students of Jamia Millia Islamia and residents of the Jamia Nagar locality started an arson. Yet, the incessant feed on social media platforms exposed the lies peddled by the Delhi Police, the BJP-RSS and the Modi regime’s lackeys. The simmering anger against the Delhi Police exploded in the city when the visuals of the Delhi Police and masked thugs entering the Jamia Millia Islamia University campus became public.

Blatantly violating the law, the Delhi Police, accusing students inside the campus of stone pelting, broke into the Jamia Millia Islamia campus, fired tear gas shells and baton-charged the students, not sparing even those studying in the library, those in washrooms or in hostels. The girls and boys were indiscriminately assaulted by the Islamophobic and Brahminical Delhi Police and then they were paraded, at gunpoint, with their hands up in the air like prisoners of war. The visuals of such atrocities, extremely macabre, became a rallying call, much to the dismay of Modi and Shah, uniting the progressive and democratic students of India.

More than 60 students, many of them wounded, and with fractures, are detained by the Delhi Police. They are lodged in Kalkaji and New Friends Colony police stations, where they are denied food, medical care and even access to lawyers. The Delhi Police is driven by sheer hubris as Shah is patronising their actions and providing them immunity from legal repercussions. The young students, mostly those who didn’t even participate in the movement, are tortured in the police custody and mental pressure is exerted on them to force them to confess a crime they didn’t commit.

The Delhi Police is refusing them to avail their right to meet a lawyer because it’s using the mental and physical condition of the detained students to blackmail them and force them to abide by the police’s terms. Though the Delhi Minority Commission issued a warning to the Delhi Police and asked them to provide medical and legal assistance to the detained students by 3am, the policemen didn’t show any seriousness towards such a directive.

Like Jamia Millia Islamia students, AMU, from which the former splintered a century ago, is presently under siege. The pro-Hindutva Registrar allowed the Uttar Pradesh Police inside the campus after they fired several rounds of teargas shells, smashed the two-wheelers parked outside the campus and even fired live cartridges at students. The AMU students, mostly hostel residents, came out to protest against the police atrocities on the Jamia Millia Islamia students in the evening. It irked the Yogi Adityanath-led Hindutva fascist Uttar Pradesh government and it unleashed state violence on the students. Heavily armed policemen entered the campus, gatecrashed girls’ hostel and attacked students living in hostels of the AMU, thrashing them brutally. The internet is suspended in Aligarh to prevent the students from sharing their plight with the world or to show the real picture of state violence.

Students of Hyderabad’s Maulana Azad National University (MANU), the IIT Bombay, Jadavpur University of Kolkata, Banaras Hindu University of Varanasi, a madrassa of Lucknow, came out in the night, with torches, to rally in support of the Jamia Millia Islamia and AMU students. The students of Jawaharlal Nehru University (JNU), Delhi University and various political, students and youth organisations are also rallying in front of the Delhi Police headquarters, where, ironically, the Delhi Police personnel gathered a few weeks ago demanding justice when they were brutally thrashed by lawyers in Delhi courts. The sit-in protest before the Delhi Police headquarters will continue all night and day, indefinitely, until the Delhi Police is withdrawn from the campus of Jamia Millia Islamia campus, until the detained students are released with proper medical aid and the Delhi Police chief agrees to punish the perpetrators of the violence by identifying them.

Until the early morning of Monday, the Delhi Police didn’t agree to any of the demands of the students and youth, neither did the BJP-led government promised any respite. Modi and Shah are happy to use the massive discontent over the Citizenship Amendment Act to prevent any noise over the spiralling inflation, falling GDP growth and all-time-high unemployment. The Modi regime is keen to pass a dangerous Data Bill, sell-off Indian Railways, Air India and the BSNL using the chaos that’s prevailing over the contentious Act. However, the students’ movement in Delhi and a series of solidarity movements throughout India, including Assam and the entire northeastern states, is causing much trouble to the regime’s agenda.

Can the Modi regime survive this rising of the people, especially the poor? Can it continue with its polarisation drive in Delhi and sweep the election defeating the AAP and the Congress party? Can it polarise the Bengali people in communal lines by exploiting the anti-Citizenship Amendment Act protests done mostly by Bengali Muslims who are called “illegal immigrants” by its leaders? It may not be able to fulfil its obnoxious agenda this time, as the common people are continuously upgrading their political knowledge, especially over the contentious Citizenship Amendment Act. The students’ movements over the onslaught on the Jamia Millia Islamia throughout the country, the anger of the people on the streets of central Delhi, the anger that exploded in Jadavpur, MANU, JNU, etc, proves that the student community will neither lose hope nor capitulate to the power, even though many before them had done so.

The Delhi Police’s atrocities against the Jamia Millia Islamia students is identical to the brutal actions of the Uttar Pradesh Police against the AMU students. Thus, the protests against them are also threaded together by the students all over India and they are vociferously exhibiting their anger to the Modi regime. If the BJP-RSS and the Modi regime do not step back from the perilous course of action, then there will be severe repercussions, as the students’ movements always bring forth great political changes in tyrannical states and none knows better than those who experienced the tumultuous course of the emergency between 1975-77. In a Modi-fied India, students are becoming the messengers of hope and change.