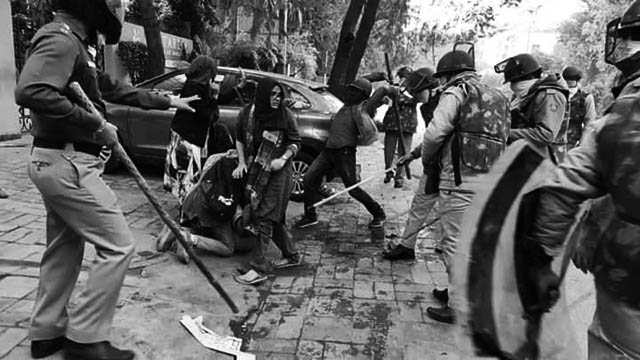 A peaceful rally of Muslim residents of New Delhi’s Jamia Nagar against the contentious Citizenship Amendment Act, 2019, on Sunday, 15 December, was brutally attacked by the Delhi Police, which is controlled by Home Minister Amit Shah. The Islamophobic police attacked men, women and teenagers who were raising slogans against Prime Minister Narendra Modi’s government and its conspiracy to disenfranchise 200 million Muslims. The Jamia Nagar protest movement was the first of its kind in years when the ghettoised Muslims of one part of New Delhi came out in open, defying Islamophobia, to safeguard their constitutional rights.

Using the violence as a weapon, the entries and exits of the Jamia Nagar ghetto, including areas like Batla House, Okhla Vihar, Shahinbagh, Ghaffar Manzil, Zakir Nagar and Abul Fazal are closed, three Delhi Metro stations are also closed and the residents are stopped from moving in or out of the locality. There is a simmering fear among the residents of Batla House and Zakir Nagar that the total cutoff of the locality can be a signal that the RSS and its affiliates may be planning a pogrom against the Muslims right in the heart of New Delhi, in a place that never existed for the upper-caste Hindus of the city.

Jamia Nagar protest also became the new weapon of mass disinformation for the RSS and the BJP, as using Delhi Police’s lies, they started hurling choicest abuses on the Jamia Nagar residents and Jamia Millia Islamia students by calling them “jihadi” and “anti-national”. Just like vilifying the people’s struggle in West Bengal using communal narrative, the RSS and the BJP are also vilifying the Jamia Nagar protest and demonising the participants. The agenda is clearly to portray the frightened Muslims protesting against the assault on their constitutional rights in the darkest shade; the mileage will be derived by the Hindutva fascists, while the Delhi Police will act as its obedient pawn.

The Jamia Nagar protest is the first of its kind in decades where the people, men and women together, came out against a political decision of the Hindutva fascist state that aims to disenfranchise the Muslims and turn them into stateless, second-class residents of the country they call home. For the first time in six years of Modi’s rule, after bearing enough of atrocities, mob lynchings, vilification and marginalisation, the Muslims of India, including women, have burst out in sheer anger against the Citizenship Amendment Act throughout the country. Their valour, which was underestimated by the Hindutva fascist camp, panicked the Modi regime. The only way out for these fascist forces is to instigate communal violence with the help of the Delhi Police.

Hundreds of masqueraded men, acting as the docile tools of Hindutva fascist RSS, are trying to incite violence and arson in the guise of the protests. These props of the ruling classes are deployed to intensify antagonism between Hindus and Muslims in Delhi, West Bengal, etc. The photographic and video evidence that shows the Delhi Police’s complicity in burning buses along with the RSS goons prove it beyond doubt that the Hindutva fascist camp is using this situation to propel anti-Muslim violence. Any riot in New Delhi, even at a limited scale, will trigger a mass hysteria around the country and fuel Islamophobia to a higher level. This is something Modi and Shah are waiting for as it will keep the story of economic disasters, unemployment and a total collapse of governance in the oblivion.

The silence of all major political players of the opposition, on the question of the Jamia Nagar protests and the police atrocities, shows their hypocrisy on the question of Muslims, the Citizenship Amendment Act, 2019, and the question of protecting the secular character — albeit on paper — of the Indian Constitution by resisting Hindutva fascism at a time when the Delhi assembly election is just around the corner.

Despite the police atrocities, the Jamia Nagar protest by the residents and Jamia Millia Islamia students won its own victories. Firstly, it became a first of its kind of a movement where the students’ movement mobilised thousands of marginalised and oppressed people. Secondly, the Jamia Nagar protest also brought out Muslim women, in a significant number, out in the arena of democratic struggle and created a mobilisation that was long-pending for the politically sidelined community. Thirdly, it ensured that the community understands the essence of a stronger unity against Hindutva onslaught. Despite all the conspiracies hatched by the Modi-Shah regime, the Jamia Nagar protest won by leading Muslims one step ahead in a greater struggle against Hindutva fascism. A long journey needs to be traversed ahead.